|Thursday, May 28, 2020
You are here: Home » World » Aluminum in vaccines causing aluminum Allergies
​

An allergic reaction to aluminum used to be extraordinarily rare. That’s not true any more, however, and researchers have been baffled for an explanation. Now it appears one has been found. It turns out that as the number of vaccinations people are given has increased, so has the incidence of the formerly almost non-existent aluminum allergy. 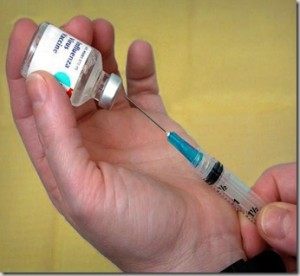 The connection? Swedish researchers think the aluminum added to many vaccinations as an “intensifier” has caused an increasing number of people to become allergic to the metal. And, with aluminum in everything from medications and deodorant to make-up and more, it’s not an easy allergen to avoid.

The first inkling of the aluminum allergy/vaccination connection was revealed a few years ago when a study of whooping cough vaccinations in Gothenburg showed that about one percent of youngsters who received these vaccinations developed pruritic nodules (small lumps under the skin that itch and can last for years) in the area of the shot. And 75 percent of these kids with the nodules also became allergic to aluminum.

“This was completely unexpected. Aluminum has been used as an adjuvant, intensifier, in vaccines for over 70 years with only a small number of reports of pruritic nodules and allergic contact dermatitis,” scientist Eva Netterlid said in a statement to the media. She is conducting research on the vaccination/allergy connection at the Occupational and Environmental Dermatology Unit in Malmo, Sweden.

So what has changed that’s caused aluminum allergies to become far more common? Netterlid thinks it’s because the types of aluminum compounds used in vaccines and other mainstream medical treatments such as allergy desensitization shots have been changed over the years. In addition, people are receiving more vaccinations than ever, in part because of the increase in international travel.

Netterlid and her research team studied hyposensitization, too. This is the common treatment in which gradually higher doses of an allergenic substance are given to patients who are allergic to pollen, mites, and other allergens. Eventually, allergy shots cause the allergic person’s immune response to these substances to be dampened down. Unfortunately, the shots often use aluminum as an “intensifier” and appear to be triggering the development of aluminum allergies.

For example, when Netterlid and colleagues did a follow-up of kids treated with aluminum containing allergy shots, they found a high number of reactions. Of 37 children treated, allergic contact dermatitis from aluminum developed in eight children and pruritic nodules developed in 13 of the youngsters. A group of 24 children with allergies were included in the study as controls — they did not receive allergy shots — and none of them had or developed pruritic nodules or an allergy to aluminum.

In another study of both children and adults with allergic respiratory diseases who were treated with hyposensitization allergy shots, Netterlid found that about four percent of the subjects developed allergic contact dermatitis from aluminum. Although there were some people in the control group with aluminum allergies who didn’t receive allergy shots in this study, examination of the arms of the patients who did get the shots before and one year after the treatment showed that a significant number developed pruritic nodules.

Netterlid and her colleagues are currently conducting research to see if some kinds of aluminum compounds used in vaccinations and allergy shots are more likely to produce allergies than other formulations. They are also looking into the symptoms people who test positive for aluminum allergy may develop when they are exposed to aluminum containing drugs and cosmetics.