America has no Intention of Getting tougher on Heroin Epidemic

✓ America’s Heroin addiction passes through Mexico, but originates in Afghanistan

In his 2018 State of the Union Address, president Trump expresses concern regarding both the opioid crisis as well as the dramatic increase in heroin addiction in America, without analyzing the underlying causes.

…”In 2016, we lost 64,000 Americans to drug overdoses:  174 deaths per day.  Seven per hour.  We must get much tougher on drug dealers and pushers if we are going to succeed in stopping this scourge.

My Administration is committed to fighting the drug epidemic and helping get treatment for those in need.  The struggle will be long and difficult — but, as Americans always do, we will prevail.” (Trump State of the Union, emphasis added)

Trump brings to the forefront the story of the Holets family of New Mexico:

“Ryan Holets is 27 years old, and an officer with the Albuquerque Police Department.  He is here tonight with his wife Rebecca.  Last year, Ryan was on duty when he saw a pregnant, homeless woman preparing to inject heroin.  When Ryan told her she was going to harm her unborn child, she began to weep.  She told him she did not know where to turn, but badly wanted a safe home for her baby.

In that moment, Ryan said he felt God speak to him:  “You will do it — because you can.”  He took out a picture of his wife and their four kids.  Then, he went home to tell his wife Rebecca.  In an instant, she agreed to adopt.  The Holets named their new daughter Hope.

Ryan and Rebecca:  You embody the goodness of our Nation.  Thank you, and congratulations.” (Trump State of the Union, emphasis added)

Beautiful narrative. The Nation weeps, Ryan was interviewed on CNN. While he and his family take a courageous stance against heroin addiction, Trump sheds crocodile tears.

While Trump acknowledges that “there’s a drug epidemic the likes of which we have never seen in this country”, his national public health emergency plan fails to address the underlying causes. Getting “tougher on drug dealers and pushers” involved in the retail sale of heroin does not resolve the drug crisis.

The unspoken truth is that the surge in heroin addiction in America has been spearheaded by the US-led invasion of Afghanistan in October 2001.

Barely acknowledged by the mainstream media, in 2000-2001 the Taliban government –with the support of the United Nations (UNODC) –  implemented a successful ban on poppy cultivation. Opium production which is used to produce grade 4 heroin and its derivatives declined by more than 90 percent in 2001. The production of opium in 2001 was of the order of a meager 185 tons.

It is worth noting that the UNODC congratulated the Taliban Government for its successful opium eradication program.

Any decrease in illicit cultivation is welcomed, especially in cases like this when no displacement, locally or in other countries, took place to weaken the achievement”

(Remarks on behalf of UNODC Executive Director at the UN General Assembly, Oct 2001)

The Taliban government had contributed to literally destabilizing the multibillion-dollar Worldwide trade in heroin.

What motivated the US-led war on Afghanistan, which had been planned several months prior to the 9/11 attacks?

Did the US-NATO led War against Afghanistan serve to restore the illicit heroin trade? 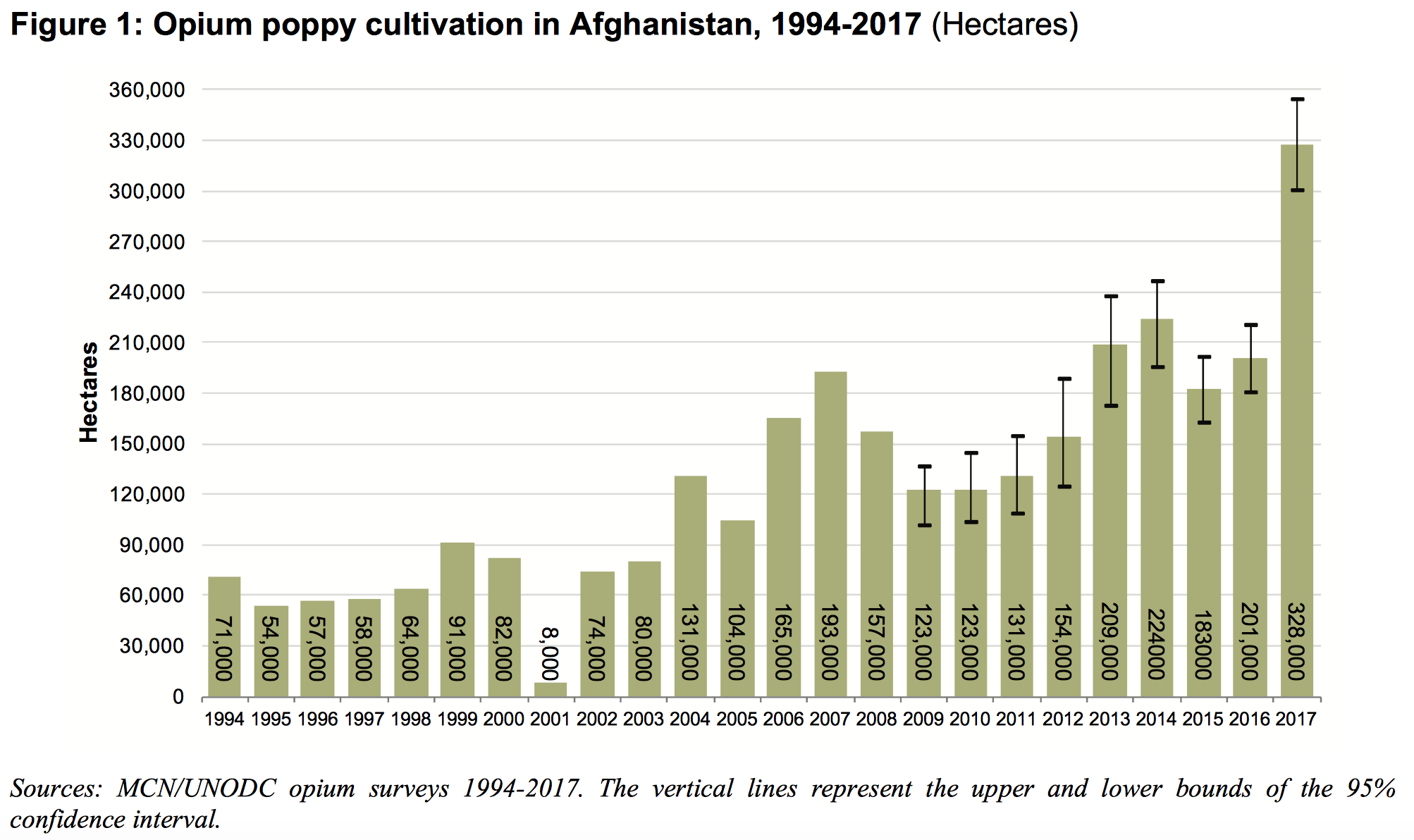 Heroin Addiction in the US

There were 189,000 heroin users in the US in 2001, before the US-NATO invasion of Afghanistan. By 2012-13, there were 3.8 million heroin users in the US according to a study by Columbia University Mailman School of Public Health. Extrapolating the 2012-2013 figures (see graph below), one can reasonably confirm that the number of heroin users today (including addicts and casual users) is well in excess of four million. 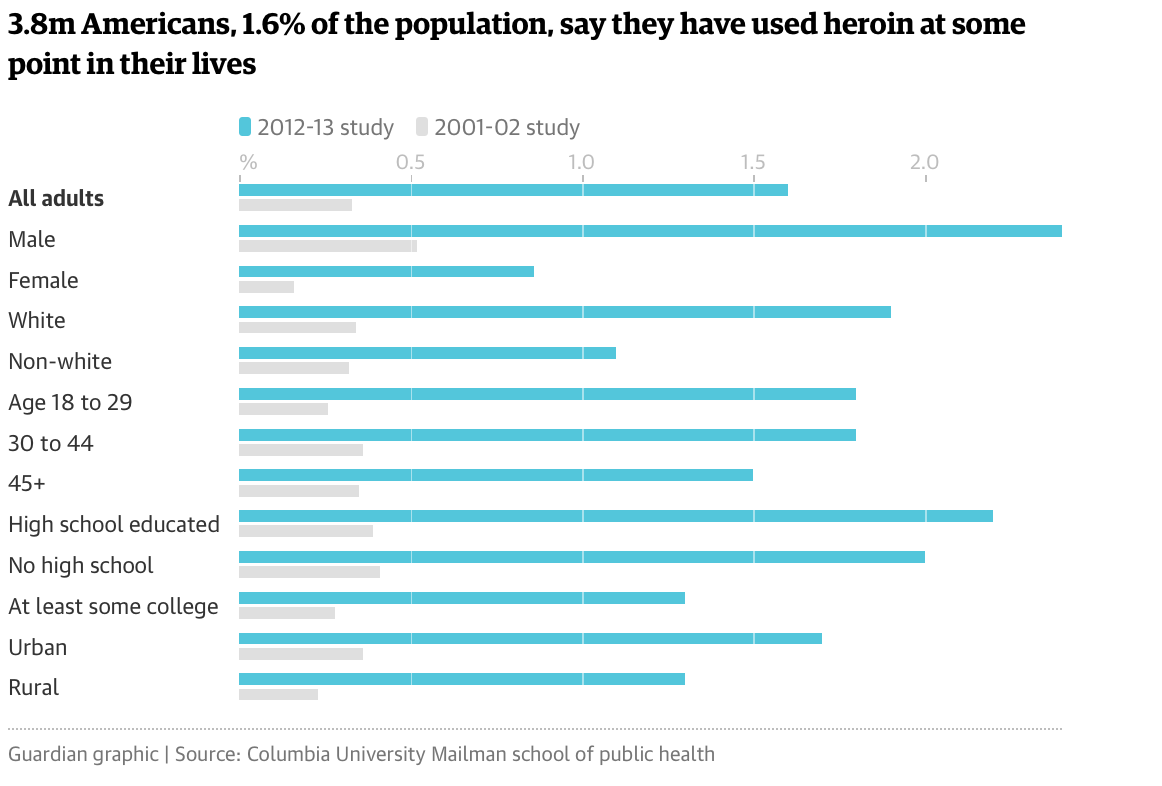 “My Administration is committed to fighting the drug epidemic,” says Donald Trump.

My message to Donald Trump: Those lives would have been saved had the US and its NATO allies NOT invaded and occupied Afghanistan. 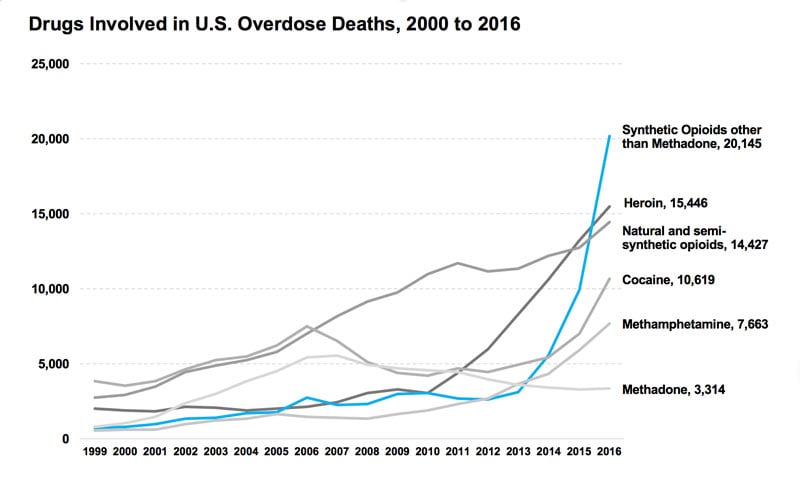 Since 2001, the use of heroin in the US has increased more than 20 times

Is there a correlation between heroin addiction in America and the dramatic increase in opium production which occurred in the immediate wake of the US-NATO October 2001 invasion?

Who is protecting opium exports out of Afghanistan?

Amply documented, the opium economy in Afghanistan was set up by the CIA in 1979.

As revealed in the Iran-Contra and Bank of Commerce and Credit  International (BCCI) scandals, CIA covert operations in support of the Afghan Mujahideen had been funded through the laundering of drug money.  “Dirty money” was recycled –through a number of banking institutions (in the Middle East) as well as through anonymous CIA shell companies–, into  “covert money,” used to finance various insurgent groups during the Soviet-Afghan war, and its aftermath. According to a 1991 Time Magazine report:

“Because the US wanted to supply the Mujahideen rebels in Afghanistan with stinger missiles and other military hardware it needed the full cooperation of Pakistan. By the mid-1980s, the CIA operation in Islamabad was one of the largest US intelligence stations in the World. `If BCCI is such an embarrassment to the US that forthright investigations are not being pursued it has a lot to do with the blind eye the US turned to the heroin trafficking in Pakistan’, said a US intelligence officer. (“The Dirtiest Bank of All,” Time, July 29, 1991, p. 22. emphasis added)

Alfred McCoy’s study confirms that within two years of the onslaught of the CIA’s covert operation in Afghanistan in 1979,

“the Pakistan-Afghanistan borderlands became the world’s top heroin producer, supplying 60 per cent of U.S. demand. In Pakistan, the heroin-addict population went from near zero in 1979  to 1.2 million by 1985, a much steeper rise than in any other nation.”

“CIA assets again controlled this heroin trade. As the Mujahideen guerrillas seized territory inside Afghanistan, they ordered peasants to plant opium as a revolutionary tax. Across the border in Pakistan, Afghan leaders and local syndicates under the protection of Pakistan Intelligence operated hundreds of heroin laboratories. During this decade of wide-open drug-dealing, the U.S. Drug Enforcement Agency in Islamabad failed to instigate major seizures or arrests. (Alfred McCoy, Drug Fallout: the CIA’s Forty Year Complicity in the Narcotics Trade. The Progressive, 1 August 1997).

In 2017, ironically coinciding with the influx of more US troops into Afghanistan, the areas under opium poppy cultivation according to UNODC increased by 83 percent in a single year, (see Figure 1 above)

It stands to reason that the increase in heroin usage could not have occurred without a corresponding surge in opium production.

Needless to say, the drug trade is a multibillion-dollar operation which has been supported by successive US administrations. The unspoken truth is that US foreign policy is supporting this lucrative trade:

The heroin business is not  “filling the coffers of the Taliban” as claimed by US government and the international community: quite the opposite! The proceeds of this illegal trade are the source of wealth formation, largely reaped by powerful business/criminal interests within the Western countries. …

Decision-making in the US State Department, the CIA and the Pentagon is instrumental in supporting this highly profitable multibillion dollar trade, third in commodity value after oil and the arms trade.( Michel Chossudovsky,The Spoils of War, Afghanistan’s Multibillion Dollar Heroin Trade, Global Research, May 2005)

The UNODC confirms in its 2017 Report that: “Only a small share of the revenues generated by the cultivation and trafficking of Afghan opiates reaches Afghan drug trafficking groups. Many more billions of dollars are made from trafficking opiates into major consumer markets, mainly in Europe and Asia.” The earnings generated by 9000 metric tons of opium are colossal, in the hundreds of billions. 9000 tons produces 900 tons of pure heroin.

These global proceeds accrue to business syndicates, intelligence agencies, organized crime, financial institutions, wholesalers, retailers, etc. involved directly or indirectly in the drug trade.  Moreover, a large share of global money laundering as estimated by the IMF is linked to the trade in narcotics.

Are US military planes being used to export opioids out of Afghanistan? US occupation forces have been instructed to turn a blind eye? According to Abby Martin,

“…there is no conclusive proof that the CIA is physically running opium out of Afghanistan. However, it’s hard to believe that a region under full US military occupation – with guard posts and surveillance drones monitoring the mountains of Tora Bora – aren’t able to track supply routes of opium exported from the country’s various poppy farms (you know, the ones the US military are guarding).” 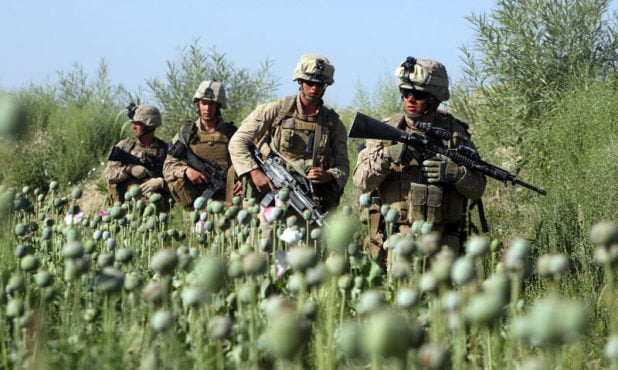 In the words of researcher Timothy Alexander Guzman: “who owns the planes and the ships that transport 90% percent of the world’s heroin from Afghanistan to the rest of the world in the first place? It sure isn’t the Taliban”.