Austerity or “Catastrophe” are the tactics of Economic Terrorism

The economic terrorists that caused the current financial meltdown have not stopped at it and continue to threaten countries with two different tactics: austerity and the threat of a catastrophe, if their proposals are not implemented. Since Greece, Iceland, Portugal, Spain and other European countries began to show signs of economic stress, the bankers who designed the system itself have told the public -through their bureaucrat pawns- that it is their way or the highway. Literally!

Although the countries with the most to lose are located in Europe, it was George W. Bush who first rang the debt crisis alarm. Bush’s economic team warned taxpayers that a massive bailout was needed to save the financial institutions that themselves caused much -if not all- of the financial crisis. As we now know, all of the reported and unreported bailout monies went to European bank accounts in what we know today as the bank bailout of 2008. Although Henry Paulson told the U.S. Congress and the public that there were some entities that we could not afford to let go down, the $700 + billion -actually $24 trillion- were really not used to save anyone but the bankers themselves, who now are using the bailout monies to purchase Greece, Island, Spain and Portugal for pennies on the euro.

Since neither their bailout nor their QE’s worked, they have now moved to phase 3 of their plan. That is a massive reduction in government spending that cuts all kinds of programs which mostly benefit the middle and lower classes in Europe and the United States. While the bankers and the corporations they own loot everyone, the governments are forced -through the World Bank and the IMF- to cut spending in something they call Austerity. But the austerity only applies to the poor, not to the banks, who as I said, are acquiring infrastructure everywhere they can and paying for it with taxpayer money.

The austerity tactic has enraged millions of people who took to the street to protest and ask their governments to reject IMF austerity policies and simply abandon their membership from this and other globalist financial institutions. Instead, governments like the Greek have decided that they are not accountable to its citizens and that austerity is the way to go. As a response, the Greeks went back out to the streets. While people’s anger grows as they see their pension funds stolen, their salaries cut or frozen and the cost of life growing exponentially, the financial terrorists at the top of the banking industry have decided to once again use their last tool: Financial Terrorism.

Financial Terrorism occurs when the people who engineer the financial crisis -the bankers- in order to consolidate economic power and tighten up their grip on their monopolies, call on their customers -the governments- to pay their debts all at once. Because it is impossible for any government to pay off all its debt to the financial sharks, their institutions such as the World Bank, the IMF, the Bank of International Settlements and the Federal Reserve demand that those governments impose austerity programs that further erode the middle and lower classes and that accept new loans with higher interests in order to pay for the older loans.

If a government defies their mandate, the banks impose financial punishments on the debtor countries by increasing the interest rates on their loans and lowering their credit worthiness. That in turn makes it more difficult for the countries to be able to borrow and as a consequence they keep on spiraling down into the hole of poverty. Since countries are no longer able to borrow their way out of debt, the only solution left is to sell their infrastructure -ports, roads, institutions, services, industry and so on- in order to pay for the debt. As you may have guessed it, the buyers of such assets are the banks themselves, who arrive with taxpayer cash in hand to further consolidate their dominion of the borrowing nations.

The scenario that emerges from these actions is not only more ravaged countries with worse economic and financial policies -now under the complete control of the bankers-, but also larger groups of poor people, a smaller middle class and a stronger oligarchy. The difference this time around is that the bankers do not only intend to liquidate a third world nation, but the largest more developed western nations including those with the largest amounts of natural resources and military power, which of course will also become property of the bankers. 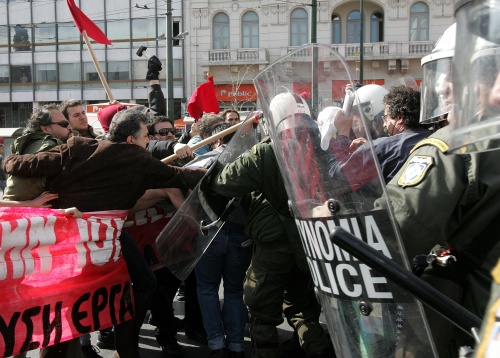 The ultimate goal the bankers intend to accomplish is to control it all -not that they already not do that. For that, they built the system we now live in. They carefully socially engineered every single aspect of our lives. The result of such engineering is the passive state in which most people live, where they do not even know anything of this sort is happening, while many others simply do not care. Given this scenario, it is really hard to see how the bankers will have any problem executing their long awaited plan. Even as millions of people rise from their long dormant state, the majority have no idea that their future is ending today. As it happened in the past, it will take a revolution from a minority to make sure that free people remain free. It would be much easier and effective, though, if more folks broke off from their trance and gave them a hand. Although a revolution by the minority may save the majority again, only a revolution from the majority will be able to root the cancer known as the economic and financial Cartel of the Eight Families.