The Brussels Attacks: What is True, What is Fake?

The  alleged Will (Testament) of one of the Daesh suspects;

Foreknowledge of the Attacks by the Belgian police and security authorities;

The role and death of suicide bombers Khalif and Ibrahim el-Bakraoui respectively at the Maelbeek metro station and Brussels airport?

Where are the official surveillance video recordings? Sofar they have been suppressed?

A review of official police statements suggests that the still photos allegedly from the Airport CC Surveillance Camera were not initially released by the Police, they were first published by Dernière Heure, DH.be, which is part of Belgium’s media giant Groupe Multimédia IPM S.A.

It is worth noting that DH.be together with La Libre (also part of Groupe IPM) (mistakenly) publishedthe fake CC surveillance video of the Brussels airport bomb attacks by using the footage of the Moscow terror attack of January 2011.

Below is the picture of the three Daesh suspects walking in Brussels airport. There is no mention as to when (at what time) the still video picture was taken.

Apart from this still image, no official CC surveillance video footage was released. (See our analysis on the fake CC videos). 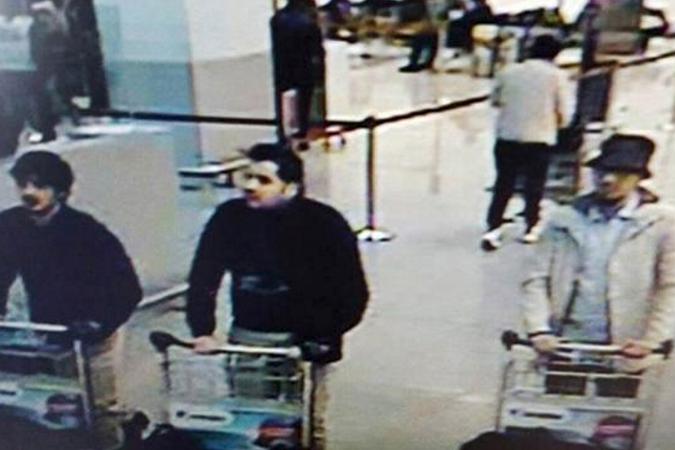 As mentioned above, there are contradictions regarding the time of release and the source of the above images.

Derniere Heure DH.net.be published the still photo from the CC camera at 10.27am, two and a half hours BEFORE its alleged official release by the Brussels police: at 12.58pm.

The airport was closed shortly after the 8am attack: there are three possible answers:

1) that the airport security authorities made the video images available to DH.be prior to releasing it to the police.

2) that the Brussels police authorities released the images to DH.be as an exclusive, prior to their official release. Unlikely

3) that the source of the still image did not emanate from the airport surveillance CC cameras, but from another source which was used by Derniere Heure DH.be

Most media reports acknowledged that the mysterious photo of the alleged suicide bombers was released by the Brussels police.

The twitter entries below confirm the exact time at which the airport photos were released:

First Release by DH.be at 10.27am (entitled “Photo Exclusive” by DH.be) 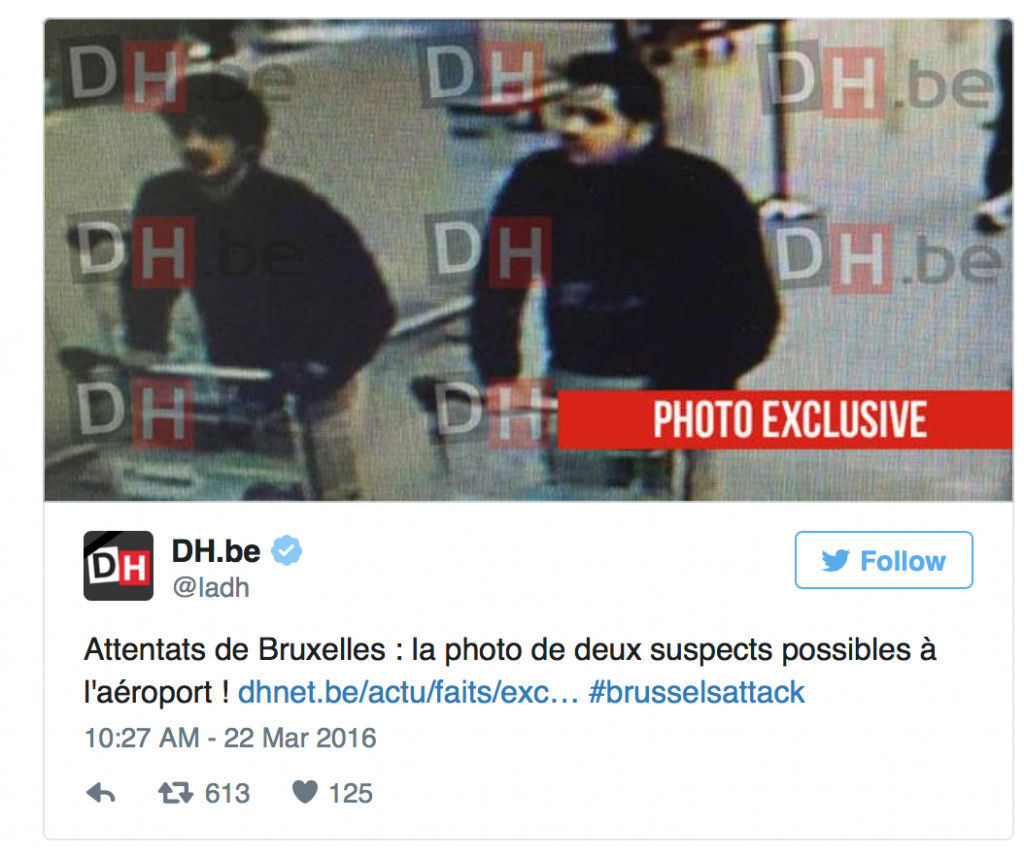 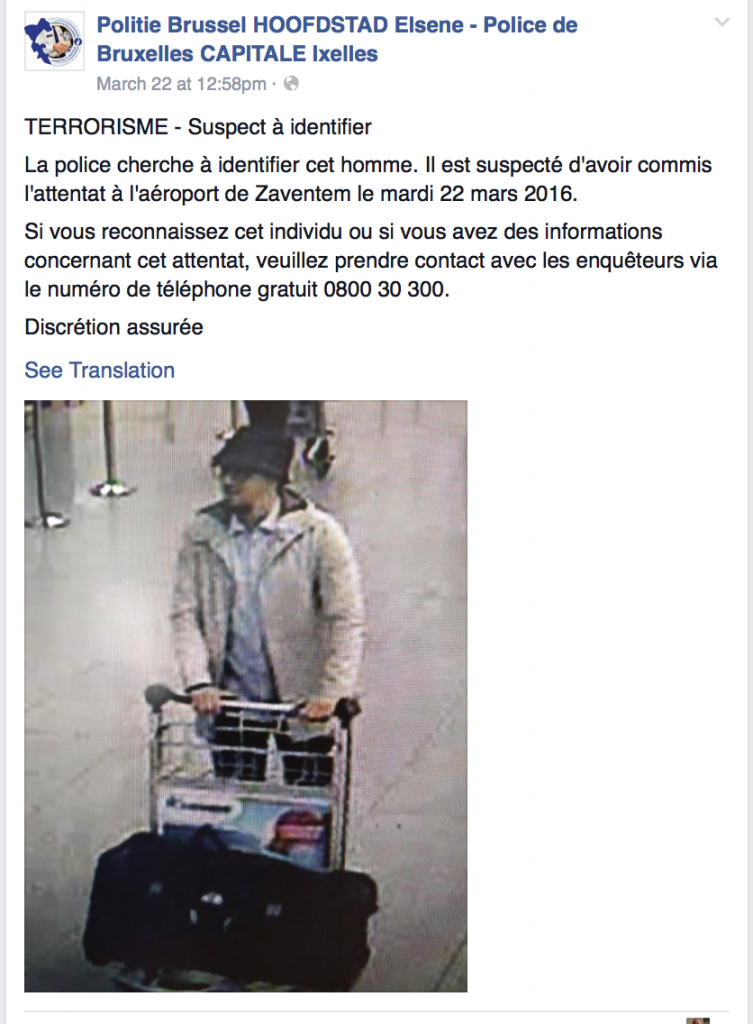 The press release of the federal prosecutor’s office on March 23rd confirms the identity of one of the suspects, Ibrahim El Bakraoui and mentions the photo. The time of its release is not mentioned.

Analysis: Are the airport images genuine?

In other words, can we trust DH.be which published a fake surveillance video of the bomb attack (using footage from Moscow January 2011) on March 22 at 09.07 (one hour after the bomb attack). (See our earlier report on this issue, see summary in the text box below)

The Moscow Airport January 2011 and the Minsk, April 2011 terror attacks

The CC surveillance videos of the attacks in real time published by Belgium’s media on March 22  at both the airport and the metro are fake,

This is confirmed by an earlier Global Research report. The Belgian corporate media published footage from the Moscow airport attacks (January 2011) and the Minsk Metro terror attack (April  2011). 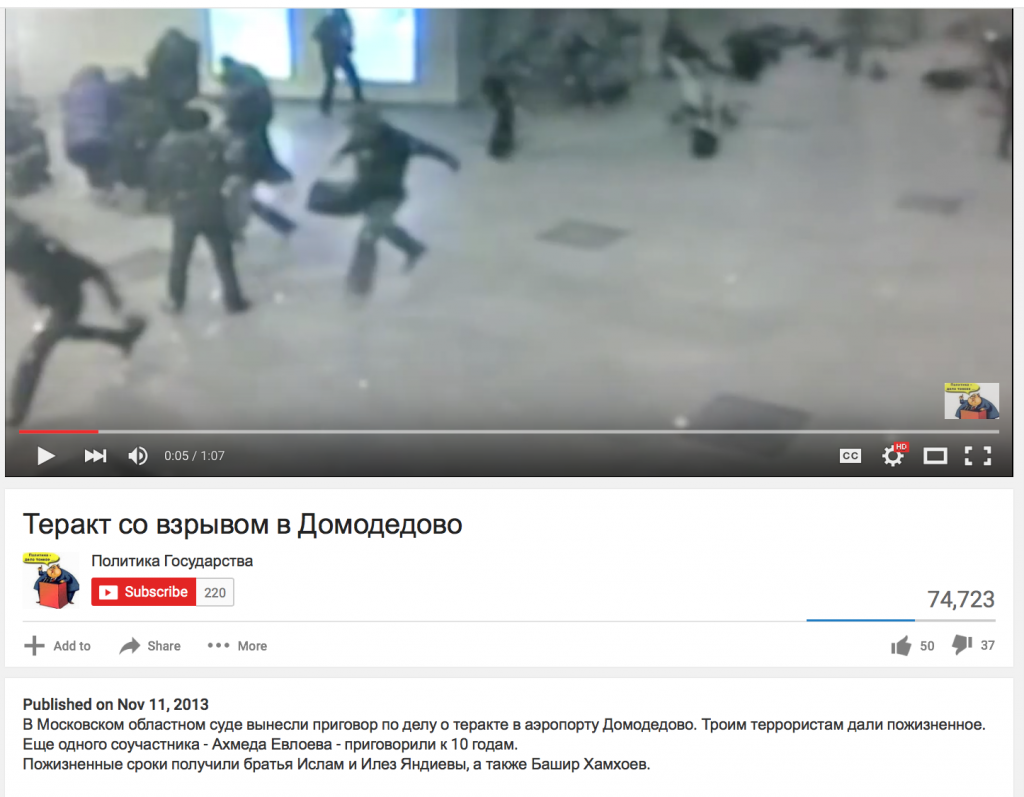 Here is a screenshot of  the Minsk 2011 video footage broadcast on Belgian network TV and on the internet depicting the explosion in the Metro in Brussels, March 22, 2016 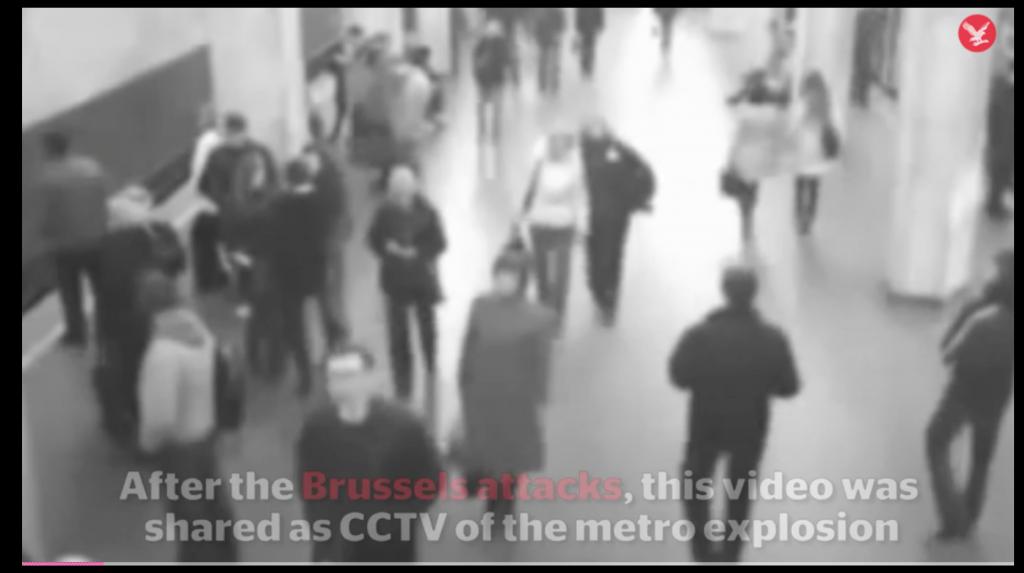 In contradiction with the official Prosecutor’s press release which identifies only one of the suspected terrorists, namely Khalif , several media reports identified the three men as Khalif and Ibrahim el Bakraoui at Brussels airport together with Najim Laachraoui. The quoted source was the official surveillance camera.

Khalif allegedly committed the suicide attack at the metro station. So why was he walking together with his brother at the airport? The airport was closed down immediately after the bomb explosions. The Prosecutor’s press release (March 23) quoted above gives a superficial explanation.

In this regard, several media changed their stories, first Khalif died at the airport as the second kamikaze. The media subsequently clarified quoting The Belgian Federal Prosecutor “that one detonated at the airport and the other at the Maelbeek metro station.”

In a subsequent statement emanating from the Prosecutor’s office, Najim is confirmed as the second kamikaze at the airport. In turn, media reports then confirmed that Najim Laachraoui was the second attacker at the Zaventem Airport. Subsequent reports confirm the death of Ibrahim and Najim at the airport, without any substantiating evidence. 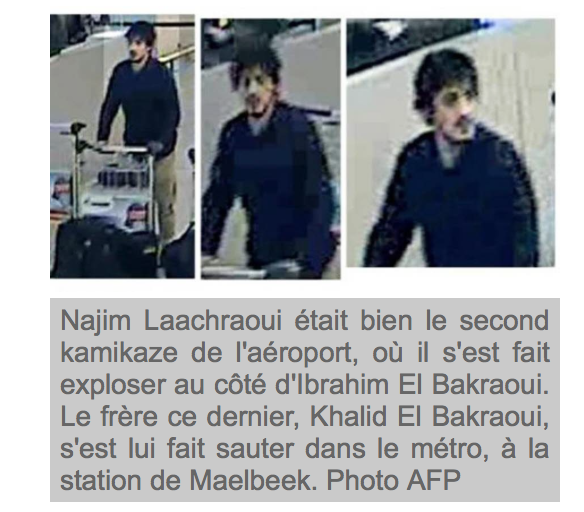 According to Le Monde “a second man, carrying a large bag, was seen on CCTV in the Brussels metro with Khalid el-Bakraoui” (quoted in the Guardian).

But where is the evidence, where are the bodies? Has a post mortem (autopsy) been conducted which confirms the identity of the kamikaze bombers. Is there a coroner’s report?

Ibrahim’s Computer and Will Found in a Rubbish Bin

According to the Prosecutor’s press release, a  computer was found abandoned in a rubbish bin which contained the will of Ibrahim. This was discovered thanks to the testimony of  the taxi driver who took Ibrahim to the airport. In addition to the explosives, a flag of the Islamic State was also found.

The full text of the alleged will (testament) is not available.

Some media call it a “letter”. From what has been released to the media,  the alleged will does not say anything. In fact it is not a will but a text focussing on Ibrahim’s personal fears. Daesh is not mentioned, neither is the planned bomb attack.

Suspects were Known to Police and Intelligence

What is of significance is that all the suspects were on the radar of police and intelligence.

The two el-Bakraoui brothers “were already being sought by police due to suspected links to the November terror attacks in Paris.” 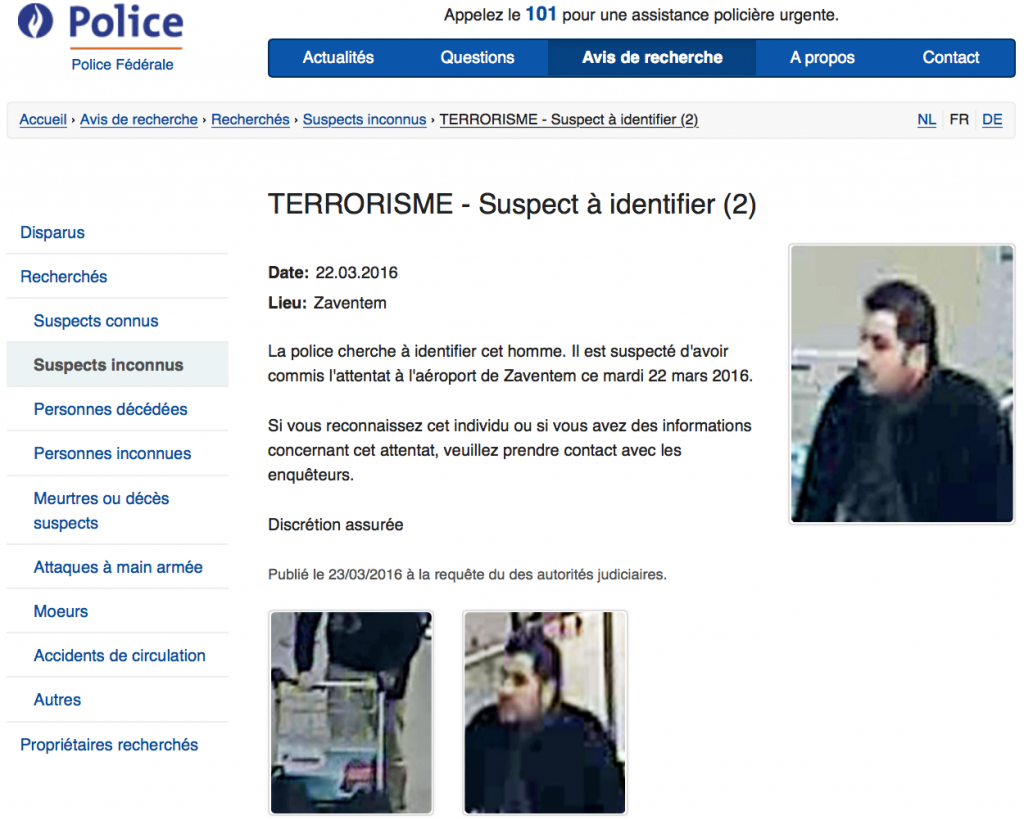 Foreknowledge of the Attacks

Not only were the suspects known to police authorities, the government had advanced information,  foreknowledge of a possible attack in Brussels:

“The Belgian security services, as well as other Western intelligence agencies, had advance and precise intelligence warnings regarding the terrorist attacks in Belgium on Tuesday, Ha’aretz has learned. The security services knew, with a high degree of certainty, that attacks were planned in the very near future for the airport and, apparently, for the subway as well.” (Haaretz, March 23, 2016)

Three weeks before the Brussels attacks, an EU terror emergency drill was held in the UK, simulating an attack on the London underground tube. Seven countries including Belgium participated in the exercise.

“Exercise allows workers to practice skills they would need in the event of a major disaster such as terror attack”. 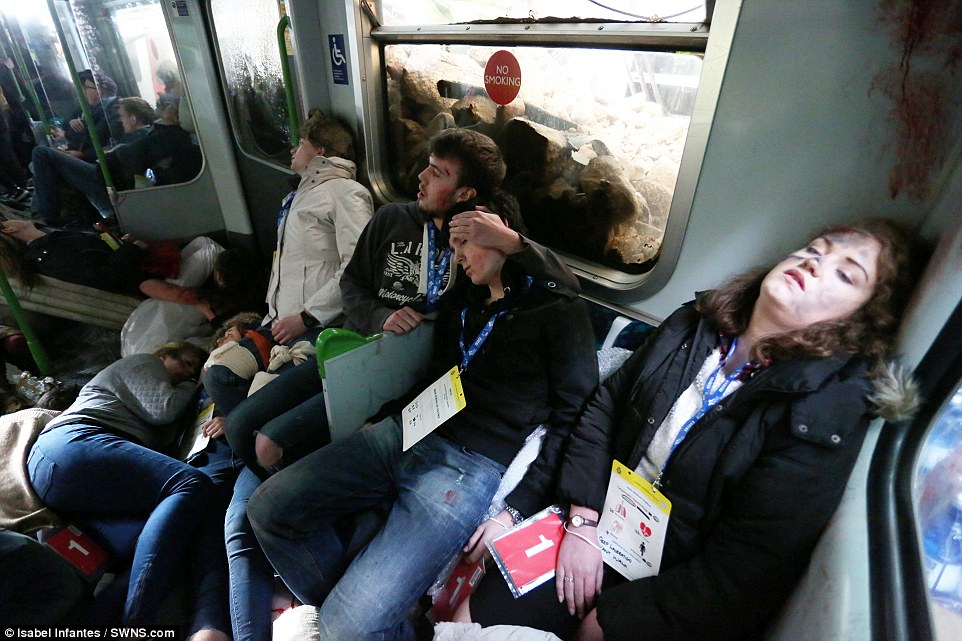 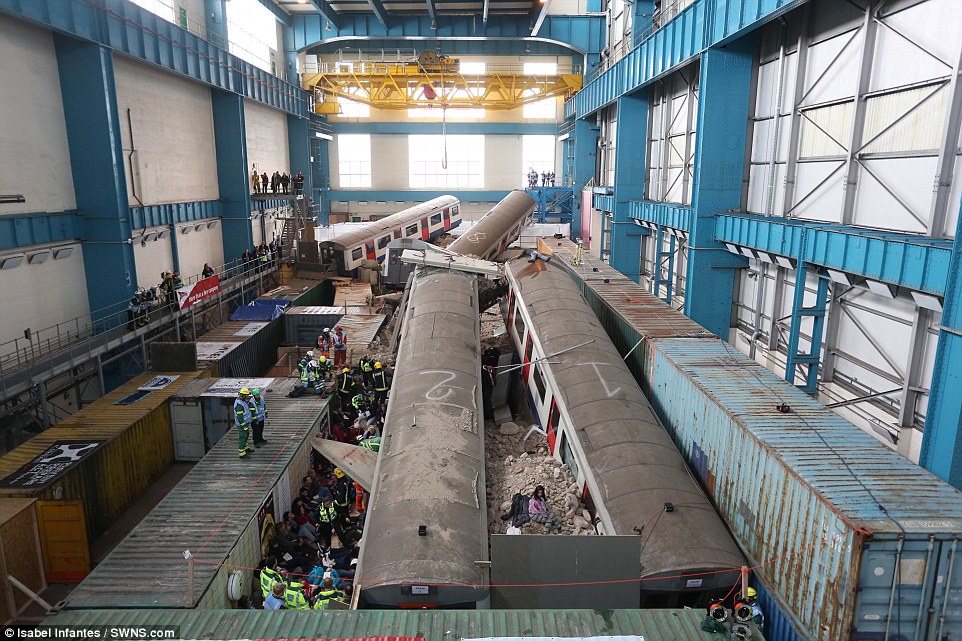 The original source of this article is Global Research