The Canadian government of Prime Minister Justin Trudeau is the object of a class action lawsuit in Quebec Superior Court pertaining to the $15 billion sale of weapons to Saudi Arabia. An action in Federal Court is also contemplated.

According to Toronto’s Globe and Mail:

Opponents of Canada’s $15-billion arms deal with Saudi Arabia are taking Ottawa to court in an attempt to block shipments of the combat vehicles, a move that could force the governing Liberals to explain how they justify the sale to a human-rights pariah under weapon-export restrictions.

The action is led by law Professor Daniel Turp together with students of the University of Montreal:

He will announce the legal challenge on Saturday and intends to file it with the Federal Court within three weeks.

Mr. Turp and his group are calling on critics of the deal across the country to rally behind their challenge, which they are calling operation Armoured Rights, pointing to how poorly Saudi Arabia treats its own citizens and the civilian carnage of the Saudi-led bombing campaign in Yemen. (Globe and Mail)

Amply documented, Saudi Arabia is the state sponsor of Al Qaeda affiliated “opposition groups” in Syria including the Islamic State (ISIS). Riyadh –acting in liaison and on behalf of Washington– plays a central role in the financing of the Islamic State (ISIS) as well as the recruitment, training and religious indoctrination of terrorist mercenary forces deployed in Syria and Iraq.

What this signifies is that Canada is selling weapons to a country which is supporting and sponsoring terrorist organizations.  Moreover Saudi Arabia is currently involved in a war of aggression against Yemen in blatant derogation of international law.

The links of Saudi Arabia to the terrorists are amply documented and will no doubt be raised in the class action court hearings.

According to London’s Daily Express “They [the Islamic State terrorists] had money and arms supplied by Qatar and Saudi Arabia.” 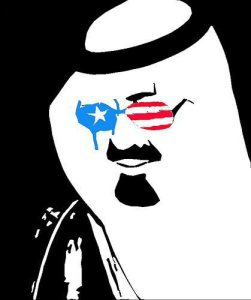 “The most important source of ISIS financing to date has been support coming out of the Gulf states, primarily Saudi Arabia but also Qatar, Kuwait and the United Arab Emirates,” (According to Dr. Günter Meyer, Director of the Center for Research into the Arabic World at University of Mainz, Germany,  Deutsche Welle)

According to Robert Fisk, the IS caliphate project “has been bankrolled by Saudi Arabia”:

…[M]eet Saudi Arabia’s latest monstrous contribution to world history: the Islamist Sunni caliphate of Iraq and the Levant, conquerors of Mosul and Tikrit – and Raqqa in Syria – and possibly Baghdad, and the ultimate humiliators of Bush and Obama.

From Aleppo in northern Syria almost to the Iraqi-Iranian border, the jihadists of Isis and sundry other groupuscules paid by the Saudi Wahhabis – and by Kuwaiti oligarchs – now rule thousands of square miles. (Robert Fisk, The Independent,  June 12, 2014)

Moreover, in 2013, as part of its recruitment of terrorists, Saudi Arabia took the initiative of releasing prisoners on death row in Saudi jails. A secret memo revealed that the prisoners were being “recruited” to join jihadist militia (including Al Nusrah and ISIS) to fight against government forces in Syria.

The prisoners had reportedly been offered a deal — stay and be executed or fight against Assad in Syria. As part of the deal the prisoners were offered a “pardon and a monthly stipend for their families, who were allowed to stay in the Sunni Arab kingdom”.

Weapons “Made in Canada”

Ottawa’s deal with Saudi Arabia is coordinated with Washington. It essentially serves the Pentagon’s military agenda in the Middle East, it channels billions of dollars to the US military industrial complex.

General Dynamics has subsidiaries in 43 countries including Canada.

Ottawa’s official stance is that these weapons which include “combat vehicles with machine guns and anti-tank cannons” are to be used by Saudi Arabia solely for purposes of national defense. They are not be used against civilians.