Spain is the first country to go belly up.  China to pull off a Nathan Rothchild style ‘purchase’

China is confident Spain will recover from its economic crisis and Beijing will buy Spanish public debt despite market fears of an Irish-style bailout, a top Chinese official said Monday. 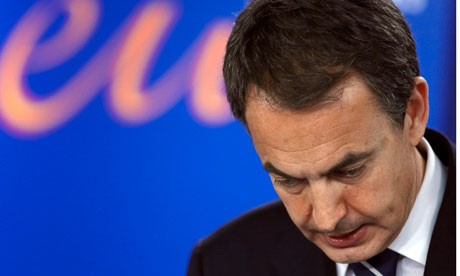 The comments by Vice Premier Li Keqiang were made in an op-ed piece in Spain’s leading daily El Pais one day ahead of his arrival in Madrid for a three-day official visit, the start of a European tour that will also include Britain and Germany.

“Since China is a responsible investor country in the long-term on the European financial markets, and in particular in Spain, we have confidence in the Spanish financial market, which has been translated into the acquisition of its public debt, something we will continue to do in the future,” he said.

“China supports the measures adopted by Spain for its economic and financial readjustment, with the firm conviction that it will achieve a general economic recovery”, said Li, who is widely tipped to become China’s next premier.

Investors have shown deep concern over the annual deficit being racked up by the Spanish government and its heavy reliance on the bond markets, leading them to demand higher and higher returns.

An economic and financial rescue for Spain would be far bigger than anything seen to date in Europe: the size of its economy is twice that of Greece, Ireland and Portugal combined.

Their talks will focus on expanding trade and economic cooperation and will also help “restore market confidence,” Zhu said.

The Spanish economy, the EU’s fifth largest, slumped into recession during the second half of 2008 as the global financial meltdown compounded the collapse of the once-booming property market.

It emerged with tepid growth of just 0.1 percent in the first quarter of 2010 and 0.2 percent in the second, but then stalled with zero percent growth in the third.