Study to follow men to see if cancer comes back.  Test may also assess efficacy of targeted drugs

Researchers have found a way to test blood for the cells that spread cancer and said they might be able to use the method to predict whose cancer will come back after treatment. 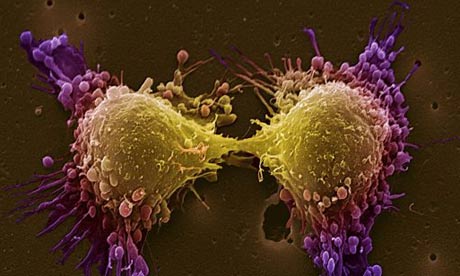 The team at Harvard Medical School and Massachusetts General Hospital used a grant from a non-profit group to develop the test, which they tried out on samples from 20 men with prostate cancer.

They found circulating tumor cells in patients with tumors that had not spread, low-grade cancers and in patients who had their prostate glands taken out three months before.

“These are patient groups in whom we would normally not expect to see circulating tumor cells, so it gives us a tremendous amount of information about their risk,” said Harvard’s Sunitha Nagrath, who led the study.

“Are these patients more prone to come back with recurring disease?” she asked a news conference at a meeting of the American Association for Cancer Research. She said her team would follow the patients to see if the tumors came back in patients who had the circulating cancer cells.

Such a test may also some day serve as a blood test for prostate cancer in addition to PSA or prostate specific antigen tests, which look for a protein made only by prostate cells and which can indicate cancer.

Nagrath said her team’s test can detect 200 circulating tumor cells from a teaspoon of blood taken from a cancer patient.

Prostate cancer is the leading cancer killer of men after lung cancer. But it is often a slow-growing disease and doctors are unsure which men have the most deadly types and which men are most likely to have their cancer spread or come back.

The researchers looked for the circulating tumor cells in the blood one day and nine days after the men had their prostates removed, and then again more than three months later.

The cells could not be found right after surgery but reappeared in some of the patients.

Nagrath said it will be important to follow the men to see how well they do and whether those with more of the circulating cells do more poorly.

She also said the test may be useful for monitoring patients on so-called targeted therapies, which affect cancer cells with certain specific genetic mutations.

“With blood tests you can sample the patients every day to see whether the genotype is changing,” she said.

The charity Stand Up To Cancer paid for the trial.  Among some of the founders of the charity are: GlaxoSmithKline, the Annenberg Foundation, Amgen, the Milken Family Foundation, corporations like Mastercard, Phillips, almost 20 television networks, a long list of publishers as well as corporate internet giants.