A special report from Christopher Monckton of Brenchley to all Climate Alarmists, Consensus Theorists and Anthropogenic Global Warming Supporters 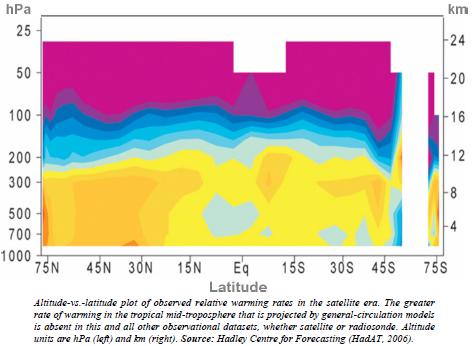 None of the temperature datasets for the tropical surface and mid-troposphere shows the strong differential warming rate predicted by the IPCC’s models. Thorne et al. (2007) suggested that the absence of the mid-tropospheric warming might be attributable to uncertainties in the observed record: however, Douglass et al. (2007) responded with a detailed statistical analysis demonstrating that the absence of the projected degree of warming is significant in all observational datasets.  Allen et al. (2008) used upper-atmosphere wind speeds as a proxy for temperature and concluded that
the projected greater rate of warming at altitude in the tropics is occurring in reality. However, satellite records, such as the RSS temperature trends at varying altitudes, agree with the radiosondes that the warming differential is not occurring: they show that not only absolute temperatures but also warming rates decline with altitude.  There are two principal reasons why the models appear to be misrepresenting the tropical atmosphere so starkly. First, the concentration of water vapor in the tropical lower troposphere is already so great that there is little scope for additional greenhouse-gas forcing. Secondly, though the models assume that the concentration of water vapor will increase in the tropical mid-troposphere as the space occupied by the atmosphere warms, advection transports much of the additional water vapor poleward
from the tropics at that altitude.

Since the great majority of the incoming solar radiation incident upon the Earth strikes the tropics, any reduction in tropical radiative forcing has a disproportionate effect on mean global forcings. On the basis of Lindzen (2007), the anthropogenic-ear radiative forcing as established in Eqn. (3) are divided by 3 to take account of the observed failure of the tropical mid-troposphere to warm as projected by the models –

“The climate sensitivity parameter (global mean surface temperature response ?TS to the radiative forcing
?F) is defined as ?TS / ?F = ? {6.1} (Dickinson, 1982; WMO, 1986; Cess et al., 1993). Equation {6.1} is defined for the transition of the surface-troposphere system from one equilibrium state to another in response to an externally imposed radiative perturbation. In the one-dimensional radiative-convective models, wherein the concept was first initiated, ? is a nearly invariant parameter (typically, about 0.5 °K W?1 m2; Ramanathan et al., 1985) for a variety of radiative forcings, thus introducing the notion of a possible universality of the relationship between forcing and response.”

Some theory will, therefore, be needed.

The fundamental equation of radiative transfer at the emitting surface of an astronomical body, relating changes in radiant-energy flux to changes in temperature, is the Stefan-Boltzmann equation – F = ? ? T4 W m–2, (18)
where F is radiant-energy flux at the emitting surface; ? is emissivity, set at 1 for a blackbody that absorbs and emits all irradiance reaching its emitting surface (by Kirchhoff’s law of radiative transfer, absorption and emission are equal and simultaneous), 0 for a white body that reflects all irradiance, and (0, 1) for a graybody that partly absorbs/emits and partly reflects; and ? ? 5.67 x 10–8 is the Stefan-Boltzmann constant.  Differentiating Eqn. (18) gives –

Since the Earth/troposphere system is a blackbody with respect to the infrared radiation that Eqn. (20) shows we are chiefly concerned with, we will not introduce any significant error if ? = 1, giving the blackbody form of Eqn. (19) –

However, the IPCC, in its evaluation of ?, does not follow the rule that in the Stefan-Boltzmann equation the temperature and radiant-energy flux must be taken at the same level of the atmosphere.  The IPCC’s value for ? is dependent upon temperature at the surface and radiant-energy flux at the tropopause, so that its implicit value ? ? 0.313 °K W–1 m2 is considerably higher than either ?S or ?C.  IPCC (2007) cites Hansen et al. (1984), who say –

“Our three-dimensional global climate model yields a warming of ~4 ºC for … doubled CO2. This indicates a net feedback factor f = 3-4, because [the forcing at CO2 doubling] would cause the earth’s surface temperature to warm 1.2-1.3 ºC to restore radiative balance with space, if other factors remained unchanged.”

Soden & Held (2006) likewise do not declare a value for ?. However, we may deduce their implicit central estimate ? ? 1 / 4 ? 0.250 °K W–1 m2 from the following passage – “The increase in opacity due to a doubling of CO2 causes [the characteristic emission level ZC] to rise by ~150 meters. This results in a reduction in the effective temperature of the emission across the tropopause by ~(6.5K/km)(150 m) ? 1 K, which converts to 4 W m–2 using the Stefan-Boltzmann law.”  Thus the IPCC cites only two papers that cite two others in turn. None of these papers provides any theoretical or empirical justification for a value as high as the ? ? 0.313 °K W–1 m2 chosen by the IPCC.

Kiehl (1992) gives the following method, where FC is total flux at ZC:

Hartmann (1994) echoes Kiehl’s method, generalizing it to any level J of an n-level troposphere thus:

Table 2 summarizes the values of ? evident in the cited literature, with their derivations, minores priores. The greatest value, chosen in IPCC (2007), is 30% above the least, chosen in IPCC (2001).  However, because the feedback factor f depends not only upon the feedback-sum b ? 2.16 W m–2 °K–1  but also upon ?, the 30% increase in ? nearly doubles final climate sensitivity:

We assume that Chylek (2008) is right to find transient and equilibrium climate sensitivity near identical; that all of the warming from 1980-2005 was anthropogenic; that the IPCC’s values for forcings and feedbacks are correct; and, in line 2, that McKitrick is right that the insufficiently corrected heat-island effect of rapid urbanization since 1980 has artificially doubled the true rate of temperature increase in the major global datasets.

With these assumptions, ? is shown to be less, and perhaps considerably less, than the value implicit in IPCC (2007). The method of finding ? shown in Eqn. (24), which yields a value very close to that of IPCC (2007), is such that progressively smaller forcing increments would deliver progressively larger temperature increases at all levels of the atmosphere, contrary to the laws of thermodynamics and to the Stefan-Boltzmann radiative-transfer equation (Eqn. 18), which mandate the opposite. It is accordingly necessary to select a value for ? that falls well below the IPCC’s value. Dr. David Evans (personal communication, 2007) has calculated that the characteristic-emission-level value of ? should be diminished by ~10% to allow for the non-uniform latitudinal distribution of incoming solar radiation, giving a value near-identical to that in Eqn. (26), and to that implicit in IPCC (2001), thus –

The feedback factor f accounts for two-thirds of all radiative forcing in IPCC (2007); yet it is not expressly quantified, and no “Level Of Scientific Understanding” is assigned either to f or to the two variables b and ? upon which it is dependent.
Several further difficulties are apparent. Not the least is that, if the upper estimates of each of the climate-relevant feedbacks listed in IPCC (2007) are summed, an instability arises. The maxima are –