Fluoride depletes iodine in the body

Fluoride is getting a lot of bad press these days, and for good reason: it is a toxic molecule that wreaks extensive, often irreversible, havoc on the body. The thyroid is particularly affected by fluoride exposure because its store of iodine is depleted. Iodine deficiency depresses the thyroid’s metabolic and immune functions, resulting in hypothyroidism and lowered immunity. 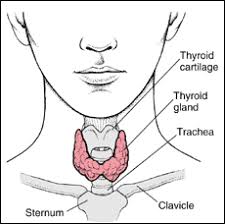 Fluoride and iodine are both halogens. Fluoride, the negative ion of the element fluorine, easily displaces iodine in the body because it is much lighter and therefore more reactive. In fact, the activity of any one of the halogens (Iodine 126.70, Bromine 79.90, Chlorine 35.45, Fluorine 18.99 are the most common) is inversely proportional to its atomic weight. In other words, one halogen can displace another one of a higher atomic weight but cannot displace one of lower weight.

But the action of iodine in the thyroid is not limited to metabolism; it also has an important immune function. Blood circulates through the thyroid once every 17 minutes in what has been called the ’17 minute passage’. Secretion of iodine, a potent germ killer, into the blood stream as it is passing through the thyroid weakens invading organisms, allowing them to be more easily eradicated. If the thyroid is deficient in iodine, this critical step in immunity will be reduced or eliminated.

Unlike iodine, which the body cannot store long-term, fluoride is a problematic and persistent toxin. Its effects are systemic and only about half of what is ingested can be excreted; the rest is stored in bones and tissues, blocking access to other elements, like iodine.

Fluoride exposure can come from multiple obvious and not-so-obvious sources. In addition to dental hygiene products and drinking water, many breakfast cereals, juices from concentrate, soda and other processed foods contain alarming levels. Fluoride-containing pesticide use means that the environment is being flooded with fluoride by conventional agriculture (http://www.fluoridealert.org/f-pest…). Also, many antidepressants contain large amounts of fluoride and are widely prescribed, often for a lifetime of use.

Conventional medicine’s response to hypothyroidism typically ignores causes and prescribes synthetic thyroxine hormone in an attempt to balance out the health equation with another unnatural substance; this is nothing new. But hypothyroidism is a national epidemic, affecting roughly 10% of the female population in the US and in no way sparing men. It has created a stable, ever-expanding market for these cash cow thyroid drugs (the leading thyroid drug was number 7 on JAMA’s list of ‘most commonly prescribed’ in 2006; one year later it was number 4).

One might assume then that fluoride’s role in depressing thyroid function is a new discovery, that government fluoride programs simply lack this vital information. Yet research has been taking place since the 1930s, when fluoride was used to treat individuals with overactive thyroid. The relationship is well established, and old.

Which leads inevitably to a difficult question: How could government allow fluoride addition to drinking water, approve fluoride-containing drugs and pesticides, and fail to test for fluoride content in food when there is a known connection with serious thyroid complications?

Perhaps the cash value of the fact that millions of Americans take thyroid drugs, and most likely will take them the rest of their lives, can suggest an unbiased, honest answer.