Our bodies, our minds and our civilization will be completely and irreversibly transformed 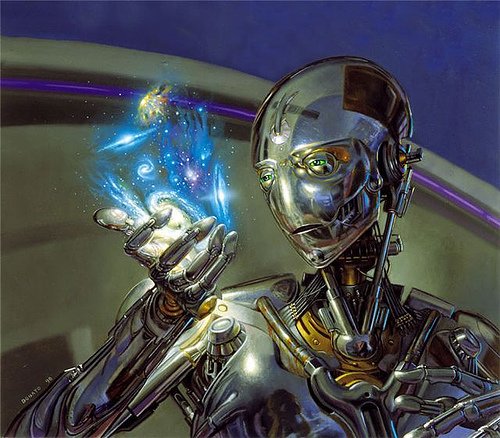 So if computers are getting so much faster, so incredibly fast, there might conceivably come a moment when they are capable of something comparable to human intelligence. Artificial intelligence. All that horsepower could be put in the service of emulating whatever it is our brains are doing when they create consciousness — not just doing arithmetic very quickly or composing piano music but also driving cars, writing books, making ethical decisions, appreciating fancy paintings, making witty observations at cocktail parties.

If you can swallow that idea, and Kurzweil and a lot of other very smart people can, then all bets are off. From that point on, there’s no reason to think computers would stop getting more powerful. They would keep on developing until they were far more intelligent than we are. Their rate of development would also continue to increase, because they would take over their own development from their slower-thinking human creators. Imagine a computer scientist that was itself a super-intelligent computer. It would work incredibly quickly. It could draw on huge amounts of data effortlessly. It wouldn’t even take breaks to play Farmville.

Probably. It’s impossible to predict the behavior of these smarter-than-human intelligences with which (with whom?) we might one day share the planet, because if you could, you’d be as smart as they would be. But there are a lot of theories about it. Maybe we’ll merge with them to become super-intelligent cyborgs, using computers to extend our intellectual abilities the same way that cars and planes extend our physical abilities. Maybe the artificial intelligences will help us treat the effects of old age and prolong our life spans indefinitely. Maybe we’ll scan our consciousness into computers and live inside them as software, forever, virtually. Maybe the computers will turn on humanity and annihilate us. The one thing all these theories have in common is the transformation of our species into something that is no longer recognizable as such to humanity circa 2011. This transformation has a name: the Singularity. (Comment on this story.)

The difficult thing to keep sight of when you’re talking about the Singularity is that even though it sounds like science fiction, it isn’t, no more than a weather forecast is science fiction. It’s not a fringe idea; it’s a serious hypothesis about the future of life on Earth. There’s an intellectual gag reflex that kicks in anytime you try to swallow an idea that involves super-intelligent immortal cyborgs, but suppress it if you can, because while the Singularity appears to be, on the face of it, preposterous, it’s an idea that rewards sober, careful evaluation.

People are spending a lot of money trying to understand it. The three-year-old Singularity University, which offers inter-disciplinary courses of study for graduate students and executives, is hosted by NASA. Google was a founding sponsor; its CEO and co-founder Larry Page spoke there last year. People are attracted to the Singularity for the shock value, like an intellectual freak show, but they stay because there’s more to it than they expected. And of course, in the event that it turns out to be real, it will be the most important thing to happen to human beings since the invention of language.

The Singularity isn’t a wholly new idea, just newish. In 1965 the British mathematician I.J. Good described something he called an “intelligence explosion”: