Germany and the UNO against Syria

The neo-conservatives and liberal hawks who have been preparing the war against Syria since 2001 have been relying on several states from the UNO and the Gulf Co-operation Council. While we know about the role played by General David Petraeus in launching and pursuing the war until today, two personalities – Jeffrey Feltman (number 2 at the UNO) and Volker Perthes (Director of the main German think tank) – have remained in the shadows. Together, with the support of Berlin, they have been using and are still manipulating the United Nations in order to destroy Syria.

In 2005, when Jeffrey Feltman – then the US ambassador in Beirut – supervised the assassination of Rafic Hariri, he relied on support from Germany, both for the assassination itself (Berlin supplied the weapon) [1], and for the UNO Commission charged with accusing Presidents el-Assad and Lahoud (prosecutor Detlev Mehlis, police commissioner Gerhard Lehmann and their team). The international campaign against the two Presidents was notably led by the German political analyst Volker Perthes [2].

Volker Perthes studied in Damascus, Syria, in 1986 and 1987, funded by a German research grant. He then went on to pursue a career as professor of political science in Germany, with the exception of the period between 1991 and 1993, during which he taught at the American University of Beirut. Since 2005, he has been the Director of the Stiftung Wissenschaft und Politik (SWP), the main German public think tank, which employs more than 130 specialists, half of whom are university professors.

However, when Feltman organised the Israeli attack on Lebanon in 2006, he implicated only the United States, hoping that once Hezbollah was beaten, Syria would come to its rescue in Beirut, which would provide an excuse for US intervention. Finally, Berlin sent only its marines to participate in the United Nations Forces (Finul).

During the annual meeting of the Bilderberg Group, between the 5th and the 8th June 2008 – five years before the war – Secretary of State Condolezza Rice gave a presentation which underlined the necessity of overthrowing the Syrian government. She was accompanied in this task by the Director of the Arab Reform Initiative [3], Bassma Kodmani (future founder of the Syrian National Council), and the Director of the SWP, Volker Perthes. The Bilderberg Group is a NATO initiative, and NATO directly handles security for these meetings [4].

According to a cable revealed by Wikileaks, Volker Perthes advised Ms. Rice concerning Iran. He believed that it would be dangerous to launch a military operation which could have unpredictable regional consequences – it was, however, more efficient to sabotage its economy. Volker Perthes’ advice was followed, in 2010, with the destruction of the software of Iranian nuclear plants by the Stuxnet virus [5].

In March 2011, Volker Perthes published an opinion column in the New York Times mocking President el-Assad’s speech to the People’s Chamber, during which the President had denounced a « conspiracy » against Syria [6]. According to Perthes, the « revolution » was under way in Syria, and el-Assad had to go.

In the summer of 2011, the German government managed the breakthrough of the Muslim Brotherhood in Tunisia and Egypt. It noted that at the CIA’s demand, it hosted the international coordination of the Brotherhood in Aix-la-Chapelle. Berlin thus decided to support the Brotherhood everywhere they attained power, with the exception of Hamas in Palestine, in order to avoid annoying Israël. Under the influence of Volker Perthes, the German Minister for Foreign Affairs – at that time, Guido Westerwelle – persuaded himself that the Brotherhood was not « Islamist », but « guided by Islam ». He created a discussion forum with the « moderate Islamist movements” (sic), and a Task Force for Syria. As for Perthes, he organised a reception at the Ministry in July for a delegation from the Syrian opposition, led by Brother Radwan Ziadeh. 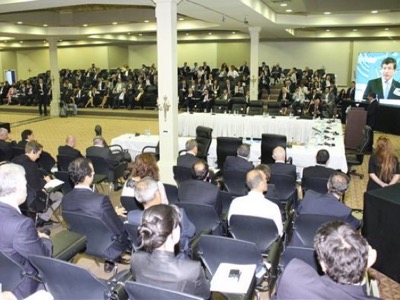 On the 6th October 2011, on the proposition of the State Department, Volker Perthes took part in the closed conference organised by the Turkish Industry & Business Association (Tusiad) and the private US intelligence company Stratfor in order to study Turkey’s energy options, and also the possible responses of eight other countries, including Germany [7]. Present at the meeting were the ten top Turkish fortunes and Taner Yıldız – the Minister for Energy – the man who was supposed to help the Erdoğan family organise the funding of the war with oil stolen by Daesh.

In January 2012, Jeffrey Feltman – then State Department director for the Near East – asked Volker Perthes to direct the « The Day After » programme, which was tasked with putting together the next régime in Syria. These meetings were held over a six-month period and resulted specifically in a report which was made public after the Geneva Conference.

« The Day After » mobilised 45 members of the Syrian opposition, including Bassma Kodmani and the Muslim Brotherhood. It was financed by the US Institute of Peace, the equivalent of the National Endowment for Democracy (NED), but is under the authority of the Department of Defense. Also solicited were Germany, France, Norway, Holland and Switzerland.

« The Day After » drew up the first draft of the plan for the total and unconditional capitulation of Syria, which became the obsession of the United Nations once Jeffrey Feltman was nominated Director of Political Affairs for the United Nations, in July 2012.

Here are the principles of the Perthes-Feltman plan

the sovereignty of the Syrian People will be abolished ;

the Constitution will be repealed ;

the People’s Assembly will be dissolved ;

at least 120 leaders will be considered guilty and banned from any political function, then judged and condemned by an international Tribunal ;

the Hezbollah and the Guardians of the Revolution will be made to withdraw ; then, and only then, will the international community fight terrorism [8]

At the same time, Volker Perthes organised the « Working Group on Economic Recovery and Development » for the « Friends of Syria ». In June 2012, under the co-presidency of Germany and the United Arab Emirates, this group distributed to the member states of the « Friends of Syria » concessions for the exploitation of Syrian gas, which could be claimed in return for their support for the overthrow of Assad’s régime [9].

Finally, he set up the “Syrian Transition Support Network” in Istanbul.

As from the Geneva Conference (30th June 2012) and the meeting of the « Friends of Syria » in Paris (6th July 2012), we can find no more public traces of Volker Perthes’ role, apart from his publications, which are aimed at maintaining Germany’s support for the Muslim Brotherhood. Germany is maintaining its policy, and after the abdication of the Emir of Qatar and the powerful rise of Saudi Arabia, nominated Boris Ruge – the director for Syria in the Ministry for Foreign Affairs – as its ambassador to Riyadh.

In January 2015, Chancellor Angela Merkel demonstrated for tolerance and against terrorism, arm in arm with Aiman Mazyek, the General Secretary of the Central Council of Muslims in Germany. In reality, he is one of the leaders of the Muslim Brotherhood.

In the summer of 2015, during his visit to Damascus, the Syrian government asked Staffan De Mistura for an explanation concerning the Perthes-Feltman Plan, of which he had only just been made aware. Highly embarrassed, the special envoy of the General Secretary of the UNO confirmed that these documents did not engage him, and promised to take no notice of them. It seems that Moscow had threatened to make them public at the Security Council during the presence of the heads of state at the opening of the General Assembly in September 2015. However, the documents were not divulged – their revelation would have questioned the very existence of the United Nations Organisation. During the same period, Berlin once again made contact with Damascus, but the Syrians were unable to determine whether this secret initiative was a reflection of a new policy by Chancellor Merkel, or one more attempt at infiltration.

For the last three years, in violation of their own Charter, the United Nations, far from doing anything at all to help restore peace to Syria, and without presenting the slightest evidence, accuse the Syrian Arab Republic of having put down a revolution, of using chemical weapons against its own population, of the massive practice of torture, and of starving its people. Above all, it is dragging its feet on any peace initiative, leaving time for NATO and the Gulf Co-operation Council to pilot the overthrow of the régime by foreign mercenaries, in this instance the terrorist organisations al-Qaïda and Daesh.

Since 2005, the group assigned to preparing the war in Syria is being piloted by the US diplomat Jeffrey Feltman, assisted by the German academic Volker Perthes.

In 2005, Feltman organised the assassination of Rafic Hariri (because the security of Lebanon was handled by Syria) ; in 2006, he organised Israel’s war against Lebanon (because Hezbollah was then armed by Syria) ; in 2011, he directed the 4th generation war from the State Department ; since 2012, from the United Nations, for which he has become the number 2, he has been working to make the war last long enough for the jihadist groups to achieve victory.

Perthes associated himself with Feltman and the private group Stratfor in order to influence German policy in the Near East. In 2008, he presented the project for régime change in Damascus to the Bilderberg Group. In 2011, he convinced Merkel’s government to support the Muslim Brotherhood during the « Arab Spring ». In 2012, he presided a work group tasked with preparing the new régime, then drew up a plan for the total and unconditional capitulation of Syria. Today, he is the UNO director for the Geneva peace negotiations.