European efforts at economic integration haven’t delivered sustainable prosperity in poorer nations like Greece and Portugal. Instead, these have left Mediterranean governments teetering on bankruptcy and at the mercy of Germany and other rich states that exploit European unity to live well at the expense of their poorer brethren. 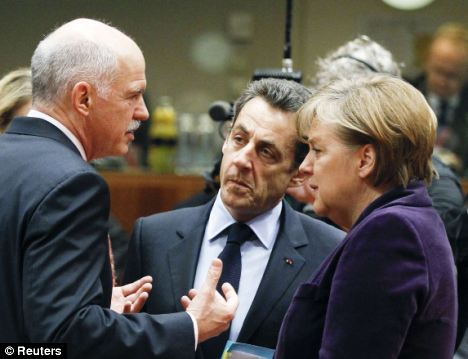 The 1992 Maastricht Treaty, which considerably harmonized product and safety regulations and methods of taxation across Europe, was supposed to remove untold barriers to growth. It didn’t, because it didn’t moderate European labor laws and social programs that discourage individual ambition and investment.

The euro, created in 1999, floats against the dollar and yen and its value reflects an average of the competitiveness of its entire membership. This leaves higher productivity economies like Germany with an undervalued currency and trade surpluses and lower productivity economies like Greece with an overvalued currency and in constant need to borrow from foreign investors.

With Maastricht and the euro, German manufactures and technology became more valuable in a more integrated European market. However, Greece, Portugal and others aren’t able to use their lower labor costs to capture assembly plants to the degree, for example, that the U.S. South attracts automotive and high-end electronics manufacturing.

Moreover, Germany and other rich states continue subtle forms of protection that discourage outsourcing even to other EU member states and this frustrates the EU single market promise to more effectively equalize employment opportunities and prosperity between the prosperous core and southern Europe.

Affluent Germany, unburdened by an obligation to share tax revenues with poorer EU states, provides generous pensions, gold-plated employment security and jobless benefits and the shortest workweek on the planet. Meanwhile, governments in Greece and other poorer EU states struggled to keep up and borrowed extensively from banks in Germany and France and other rich countries to keep up.

Now unable borrow anymore in private markets, Greece and other poorer governments are forced to seek emergency loans and concessions from richer states and private creditors. They are being compelled by Germany and others to slash government spending and social benefits, dramatically raise taxes and sell off public assets.

None of this will work, because the private sectors of these economies are so dependent on government spending to maintain employment that austerity will only cause more layoffs among both private businesses and public agencies, thrust their economies into deep recessions and significantly reduce, rather than enhance, their governments’ capacity to tax and pay interest on their debts.

Moreover, to service their restructured debts, poorer governments must pay richer governments and foreign creditors in euros and this will require their economies to accomplish significant trade surpluses by developing new export industries. This would require Germany and the rich countries to let manufacturing activities and jobs migrate south that they heretofore have blocked from moving to lower-wage economies.

With a single currency, building new export industries would require rather substantial cuts in Greek and other poorer country wages and for the Germans and others to relinquish subtle forms of protection that guarantee them higher wages and favorable trade balances.

It is doubtful Greeks are willing to let their economy sink to Third World status to perpetuate the myth of European unity. As important, the Germans too much like lecturing the world about the virtues of Teutonic thrift and efficiency to let go of mercantilism, and to let debtor nations accomplish trade surpluses and obtain the euro needed to repay their debts.

If Greece had its own currency, it would still have had to reduce government spending, increase taxes and cut wages but not by nearly as much as richer EU states and the ECB now demand because Greece could also devalue its currency against those of richer EU economies to make its exports more competitive, accelerate growth and increase debt servicing capacity.

In the end, necessity will trump pan-Europeanism. The Greeks will default on their debt and, if they are smart, eventually dump the euro.

Peter Morici is a professor at the Smith School of Business, University of Maryland School, and former chief economist at the U.S. International Trade Commission.