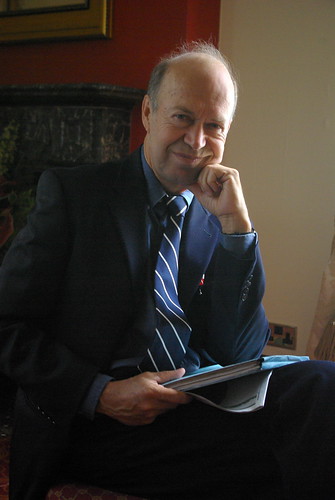 November’s election made it quite clear that the people of the United States do not want to radically change our society in the name of global warming. Pretty much every close House race went to the Republicans, while the Democrats won all the Senate squeakers. The difference? The House on June 26, 2009, passed a bill limiting carbon-dioxide emissions and getting into just about every aspect of our lives. The Senate did nothing of the sort.

The nation’s most prominent publicly funded climatologist is officially angry about this, blaming democracy and citing the Chinese government as the “best hope” to save the world from global warming. He also wants an economic boycott of the U.S. sufficient to bend us to China‘s will.

NASA laboratory head James Hansen‘s anti-democracy rants were published while he was on a November junket in China, but they didn’t get much attention until recently. On Jan. 12, the hyperprolific blogger Marc Morano put them on his Climate Depot site, and within hours, the post went viral. In a former life, Mr. Morano was chief global-warming researcher for Sen. James M. Inhofe, Oklahoma Republican.

According to Mr. Hansen, compared to China, we are “the barbarians” with a “fossil-money- ‘democracy’ that now rules the roost,” making it impossible to legislate effectively on climate change. Unlike us, the Chinese are enlightened, unfettered by pesky elections. Here’s what he blogged on Nov. 24:

“I have the impression that Chinese leadership takes a long view, perhaps because of the long history of their culture, in contrast to the West with its short election cycles. At the same time, China has the capacity to implement policy decisions rapidly. The leaders seem to seek the best technical information and do not brand as a hoax that which is inconvenient.”

Has this guy ever heard of the Gang of Four? Or the Cultural Revolution, which killed those who were inconvenient? Or the Great Leap Forward, which used the best technical information to determine that a steel mill in every backyard was a good idea?

Mr. Hansen has another idea to circumvent our democracy. Because Congress is not likely to pass any legislation making carbon-based energy prohibitively expensive, he proposed, in the South China Morning Post, that China lead a boycott of our economy:

“After agreement with other nations, e.g., the European Union, China and these nations could impose rising internal carbon fees. Existing rules of the World Trade Organization would allow collection of a rising border duty on products from all nations that do not have an equivalent internal carbon fee or tax.

“The United States then would be forced to make a choice. It could either address its fossil-fuel addiction … or … accept continual descent into second-rate and third-rate economic well-being.”

The WTO, in fact, has not “ruled” that it can impose environmental tariffs of any kind, much less those of such magnitude that they would destroy the world’s largest economy.

Mr. Hansen is just dreaming here. But that’s not surprising. He has been very creative over the years.

In 1988, he reportedly told Bob Reiss, author of yet another apocalyptic screed, “The Coming Storm,” that in the next 20 years, “The West Side Highway [in Manhattan] will be under water” and, “There will be more police cars” in New York because “well, you know what happens to crime when the heat goes up.”

Well, there are more cops and less crime, and the West Side is high and dry. One out of three isn’t bad for baseball, but it is horrendous for science.

In 1988, he testified in front of Congress, showing the temperature forecast for coming decades. He had three emission scenarios: One was labeled “A,” which he called “business as usual.” It actually underestimated the growth in greenhouse-gas emissions since then. Even with that error, which should have enhanced global warming more than he predicted, observed temperatures fell far short. He predicted 0.7 degrees Celsius (1.3 degrees Fahrenheit) of warming. This was an overestimate of more than 40 of what was observed between then and now.

How about his scenario “B,” which assumes “decreasing trace gas growth rates?” That one overestimates warming by a bit less than 40 percent (37 percent, to be artificially exact). Scenario “C” is irrelevant, as it assumed massive cuts in emissions beginning in 1988.

His forecasts of climatic change for nearly the last quarter-century are fantasy, as is his notion that dictators are better than democracy and that our country should be bullied into submission.