8.9 magnitude on Richter scale caused a 7 feet tall tsunami that hit the pacific coast of Japan

The most devastating earthquake to hit Japan in at least 300 years rocked the country on Friday afternoon, triggering a 10-meter tsunami that violently engulfed cars and other objects in its path in northern Japan, forcing tens of thousands of people to evacuate their homes and setting off tsunami warnings for 53 countries around the world. 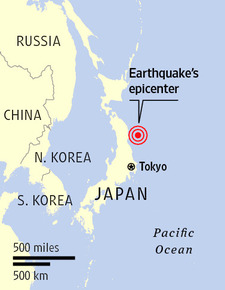 Police raised the death toll to 40, with 39 missing, according to the Associated Press, while dozens were injured in a wide range of areas including Miyagi Prefecture and central Tokyo, according to Kyodo News.

The quake, one of the five biggest in history with a magnitude of 8.9, caused mass panic around Tokyo, where workers evacuated their buildings and power was cut off at 4.1 million households in Tokyo and neighboring prefectures. The natural disaster could derail the country’s nascent economic recovery and increase Japan’s already massive public debt, which is 200% of gross domestic product.

A tsunami warning issued by the Pacific Tsunami Warning Center in Hawaii included Japan, Russia, Taiwan, the Philippines, Indonesia, Guam, the Northern Marianas, the Marcus Islands and the Wake Islands, and extended across the Pacific Ocean to include Central and South America. New Zealand also issued a tsunami warning. Austraia said there was no threat of a tsunami on its coast. In Hawaii, a tsunami alert was issued at about 10 p.m. local time.

Near Tokyo Station, the epicenter of the capital city, people were streaming out onto the street, where the only option was to walk—buses and taxis weren’t available and all trains were halted. Cell phone reception was down, causing long lines to snake around pay phones. The country’s ports and airports shut down and car navigation systems indicated that almost every entrypoint to the highway was closed. Children were walking back from school, some with protective head gear. People were huddled around televisions, trying to grasp the extent of the damage in Japan.

“This is the worst quake I’ve ever felt that was based so far away from Tokyo,” said Kiyomi Suzuki, 69 years old, who has lived in the capital city all her life.

“A screen fell off my desk,” said Varun Nayyar, an associate director at UBS Securities Japan, who hastily evacted his building. “I don’t understand why more people weren’t leaving the building. I’m from India, and if an earthquake of this strength had hit there, a lot of buildings would have collapsed.”

As helicopters buzzed overhead, a group of Chinese tourists huddled in front of a gate at the outer moat of the Imperial Palace, in Tokyo’s Otemachi business district.

In Nihonbashi district of central Tokyo district, more than 100 people were waiting for bus services, as subway and other railway services were suspended. “I don’t know how long I will have to spend to go back home,” said a housewife in her 60s, who was standing at the end of the line before the bus stop.

Prime Minister Naoto Kan, embroiled in a political funding scandal that could derail his premiership, appeared calm and composed on national television in a blue emergency workers’ outfit. He asked the public to remain calm and said there was no danger of leaked radiation from nuclear plants. “We will secure the safety of the people of Japan and the government Japan will make every effort possible to minimize the damage,” said Mr. Kan.

As mobile phones and landlines remained down in Tokyo, Twitter proved to be one of the best ways to contact loved ones and get updates on the quake.

Unable to use cellphones, many used their smartphones to tune into television broadcasts and find out what had happened.

“It’s very convenient being able to watch live TV when the phones are down,” said Minori Naito, an employee of Royal Bank of Scotland in Tokyo. “Otherwise, we’d have no idea what is going on.” 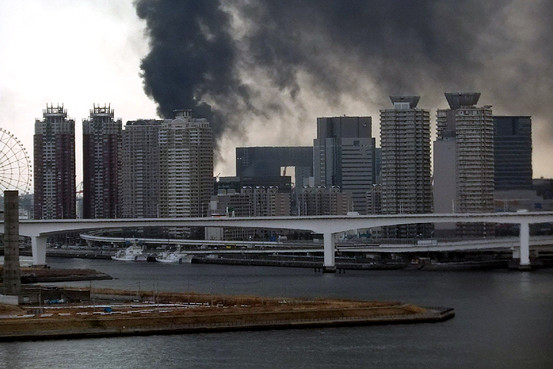 At 3:24 p.m., a large aftershock struck, which could be felt standing on the ground outside of buildings in central Tokyo. People gasped while looking up at skyscrapers swaying gently and construction cranes shaking violently atop half-completed buildings. Glass panels on the ground floor of many newer buildings shimmied but few appeared to break.

A tsunami warning included Japan, Russia, Taiwan, Guam, the Northern Marianas, the Marcus Islands and the Wake Islands, while 15 nations and territories were covered by a tsunami watch.

The yen and Tokyo stocks fell, while Japanese government bond futures gained. The quake was originally reported at a magnitude of 7.9 but was later upgraded to 8.9, apparently exceeding the 8.8 quake that struck off Chile in February 2010.

In Tokyo, hundreds of concerned office workers tried in vain to make calls on jammed cell phone networks, some wearing hardhats and other protective headgear. Many of them streamed out of buildings in the business district, gathering in open areas. The crowd appeared spooked by the sound of glass windows rattling in tall buildings.

Aftershocks were continuing, with one hitting magnitude 7.1, according to the U.S. Geological Survey. Tall buildings swayed violently in central Tokyo as the aftershocks hit.

NHK Television reported that water could be seen rising over cars and pouring into warehouses at Onahama port in Fukushima Prefecture; in Iwate Prefecture a building was washed away, with boats and cars swirling around in the rising waters.