Libya according to the UN vs the harsh reality

Despite the good will of some of the participants, the Paris conference for Libya did not have the desired effects.

This can be explained by the double language of NATO and the United Nations, who are pretending to want to stabilise the country while their actions in fact continue the Cebrowski plan for the destruction of state structures.

The spectacle in Paris was steeped in a profound ignorance of the particularities of Libyan society.

ince the annihilation by NATO of the Libyan Arab Jamahiriya, in 2011, the situation in Libya has deteriorated alarmingly: its GDP has been halved, and entire groups of the population live in misery – it is impossible to circulate in the country; insecurity is ever-present. Over the last few years, two thirds of the population have fled overseas, at least temporarily.

Writing off the illegality of NATO’s invasion, the United Nations is trying to re-stabilise the country.

The UN is represented by the UNSMIL (United Nations Support Mission in Libya), which is an exclusively political organisation. Its true character was clear from its inception.

Its first Director, Ian Martin (ex-Director of Amnesty International), organised the transfer of 1,500 Al-Qaïda jihadists, registered as « refugees » (sic), from Libya to Turkey in order to create the so-called « Free Syrian Army ».

While it is true that the UNSMIL is now directed by Ghassan Salame [1], it is still under the direct command of the Director of Political Affairs for the UN – none other than Jeffrey Feltman.

This ex-assistant of Hillary Clinton at the US State Department is one of the masters of the Cebrowski-Barnett plan for the destruction of states and societies in the « Greater Middle East » [2]. It is Feltman himself who supervised the diplomatic foundations for the aggressions against Libya and Syria [3].

The UN begins with the idea that the current disorder is the consequence of the « civil war » of 2011, which set Mouammar Kadhafi’s régime against its opposition. However, during the NATO intervention, this opposition was limited to the jihadists of al-Qaïda and the Misrata tribe.

As an ex-member of the last Libyan Arab Jamahiriya government, I can testify that the initiative of the Atlantic Alliance was not a response to the Libyan conflict, but a long-term regional strategy for the whole of the Greater Middle East.

During the general elections of 2014, the Islamists who had fought the ground war on behalf of NATO gained only mediocre results. They then decided not to recognise the « House of Representatives » (based in Tobruk) and to constitute their own assembly (based in Tripoli) which they call the « High Council of State ».

Considering that these two rival assemblies could form a bicameral system, Feltman set up the two groups as equals. Contacts between them took place in Holland, and then the Skhirat (Morocco) agreements were signed, but without the assent of both assemblies. These « agreements » instituted a « government of national union » (at first based in Tunisia) designated by the UN.

In order to prepare the general and Presidential elections and the elaboration of a new Constitution, France, taking over from the efforts of Holland and Egypt, organised a summit at the end of May between the four men presented by the UN as the principal leaders of the country, in the presence of the representatives of the main states implicated on the ground.

This initiative was energetically criticised in Italy [4]. In public, the discussion was political, while in secret, work was being done to define the structure of a Central Libyan Bank which would wipe away any sign of the theft of sovereign Libyan funds by NATO [5], and centralise oil money. In any case, after the signature of a common declaration [6] and the usual hugs and kisses, the situation on the ground suddenly turned sour.

French President Emmanuel Macron acted from his experience as a business banker – he gathered together the main Libyan leaders chosen by the UN; examined with them how to protect their respective interests with a view to creating a government which would be recognised by all; verified that foreign powers would not sabotage this process; and thought that the Libyans would applaud this solution. However, since Libya is totally different from Western societies, nothing of sort occurred.

It is clear that France, which had been, together with the United Kingdom, a spearhead of the NATO attack on Libya, is now attempting to recuperate the dividends of its military intervention, of which it has been deprived by its Anglo-Saxon allies.

In order to understand what is happening, we have to step back and analyse the way that Libyans live in terms of their personal experience.

The History of Libya

Libya has only existed for 67 years. At the fall of fascism and the end of the Second World War, this Italian colony was occupied by the British (in Tripolitania and Cyrenaica) and by the French (in Fezzan, which they divided and attached administratively to their colonies of Algeria and Tunisia).

London favoured the emergence of a monarchy controlled from Saudi Arabia, the Senussi dynasty, which reigned over the country from its « independence » in 1951. Of the Wahhabite religion, it maintained its territory in a state of absolute obscurantism, while favouring Anglo-Saxon economic and military interests.

It was overthrown in 1969, by a group of officers who proclaimed true independence and expelled the foreign forces. At the level of interior politics, in 1975, Mouammar Kadhafi drew up a programme called the Green Book, in which he promised this desert people that he would satisfy their most important dreams.

For example, while every Bedouin nurtured the ambition to possess his own tent and his own camel, he promised each family a free apartment and a car. The Libyan Arab Jamahiriya also offered water [7], free education and health care [8]. Progressively, the nomad population of the desert settled along the coast, but the links of each family with their tribe remained closer than their relations with their neighbours.

National institutions were set up, inspired by the experiences of the utopian Socialist phalansteries of the 19th century. They set up a direct democracy at the same time as they co-existed with the ancient tribal structures. In this way, all important decisions were first of all presented to the Tribal Consultative Assembly before being deliberated by the General People’s Congress (National Assembly).

On the international level, Kadhafi swore to resolve the secular conflict between the Africans, Arabs and black-skinned people. He ended slavery and used a large part of the country’s oil revenues to help the development of the sub-Saharan countries, notably in Mali. His activity woke the Western powers, who began to create aid policies for the development of the continent.

However, despite the progress that was made, thirty years of Jamahiriya were not enough to transform this African Saudi Arabia into a modern secular society. 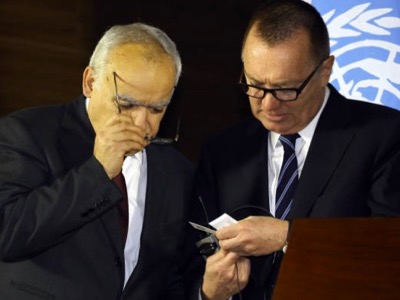 By destroying this régime and once again raising the flag of the Sanussis, NATO has set the country back to what it had been before 1969 – a collection of tribes living in the desert, cut off from the world. In the absence of a state, and without a supreme leader, the population has fallen back on their tribal structures.

Sharia, racism and slavery reappeared. In these conditions, attempting to re-establish order from the top down is ineffective. On the contrary, it is indispensable to begin by pacifying the relations between tribes.

It is only when this operation is successfully concluded that it will become possible to envisage democratic institutions. Until that time, everyone’s safety will be guaranteed only by their tribal membership. In order to survive, Libyans will therefore refrain from thinking autonomously, and will always refer to the position of their group.

Working with Turkey, the Misratas participated in the overthrow of the Jamahiriya. As soon as the Sanussi flag had become mandatory, they turned on the black people with racist fury. They accused them of all sorts of crimes and forced 30,000 of them to flee.

It would obviously be very difficult to find a personality comparable to Mouammar Kadhafi who would first of all be recognised by the tribes, then by the People. But in reality, this is not what Jeffrey Feltman is looking for.

Contrary to the official declarations concerning an « inclusive » solution, in other words a solution which integrates all the components of Libyan society, Feltman has imposed, via the Islamists with whom he had collaborated in the State Department against Kadhafi, a law which forbids a post in public service to anyone who once served the Guide.

The House of Representatives has refused to apply this text, which is still in force in Tripoli. This strategy is comparable to that of the de-Ba’athification that the same Feltman imposed on Iraq, when he was one of the directors of the « Coalition Provisional Authority ».

In both cases, these laws deprive the countries of the majority of their elites, and force them into violence or exile. It is clear to see that Feltman is still pursuing the objectives of the Cebrowski plan, while he pretends to be working for peace.

Contrary to appearances, Libya’s problem is not so much the rivalry between its leaders as the absence of pacification between tribes and the exclusion of Kadhafists. The solution can only be negotiated between the four leaders united in Paris, but only within and around the House of Representatives of Tobruk, whose authority now covers 80 % of the territory.