For London, Propaganda is an Art

No normal human being can accept to see his children suffer – consequently, they make good subjects for war propaganda. Thierry Meyssan takes a look at the use of children by the International Coalition during the war against Syria.

Just as in all wars, the war against Syria has triggered an avalanche of propaganda. And the use of children is always a winning strategy.

So, at the beginning of the war, Qatar wanted to demonstrate that the Republic, far from serving the general interest, actually despised the People. The petro-dictatorship then broadcast, on its TV channel Al-Jazeera, the legend of the children of Deraa, supposedly tortured by the police.

To illustrate the cruelty of its adversary, Qatar specified that their fingernails had been torn out. Of course, despite research, no journalist could find any trace of these children. The BBC broadcast an interview with two of them, but their nails were still intact.

Since the myth could not be proved, Qatar then launched a new story – that of a child, Hamza Ali Al-Khateeb (13 years old), who had allegedly been tortured and castrated by the «regime’s» police.

This time, they provided a convincing image. Everyone could see that the body had no sex. However, the autopsy showed that the body had been poorly preserved, and that it had fermented and swollen. The stomach hid the child’s sex, which was still present. 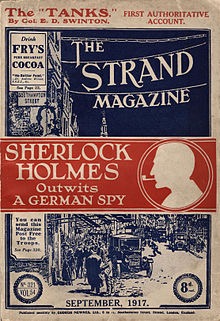 In this magazine, Sir Arthur Conan Doyle imagined the arrest of a German spy by Sherlock Holmes. The writer was working for the Office of War Propaganda.

At the end of 2013, the British took over the task of war propaganda. They had a long experience in that sector, and are considered to have invented modern propaganda during the first World War, with the Office of War Propaganda.

One of the characteristics of their method is to rely on artists, because aesthetics tend to neutralise critical thinking.

In 1914, they recruited the great authors of the time – like Arthur Conan Doyle, H.G. Wells and Rudyard Kipling – to publish texts which attributed imaginary crimes to their German enemy.

Then they recruited the heads of their major newspapers to publish the imaginary information invented by the authors.

When the United States adopted the British method, in 1917, with the Committee on Public Information, they made a more precise study of the mechanisms of persuasion, with the help of star journalist Walter Lippmann and the inventor of modern publicity, Edward Bernays (Sigmund Freud’s nephew). But, persuaded of the power of science, they forgot about aesthetics.

At the beginning of 2014, the British MI6 created the company Innovative Communications & Strategies(InCoStrat) to whom we owe, for example, the magnificent logos of the armed groups, from the most «moderate» to the most «extremist».

This company, which has offices in Washington and Istanbul, organised the campaign to convince the Europeans to offer sanctuary to 1 million refugees.

It was this company that photographed young Aylan Kurdi, drowned on a Turkish beach, and managed, in two days, to have it published on the front page of the main Atlantist newspapers in all NATO countries as well as those of the Gulf Cooperation Council. 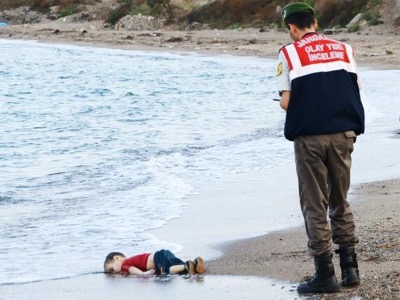 Every year, before the war, a hundred people died from drowning on Turkish beaches, and no-one mentioned it. And above all, only the tabloids showed photographs of the corpses. But this photo was so well composed…

Since I noted that a body can not be washed up perpendicular to the waves, the photographer explained later that he had moved the corpse for the needs of the photo.

The photo of young Omran Daqneesh (5 years old), in an ambulance in West Aleppo, is thus accompanied by a video. The two supports enable the information to be exploited by both the written Press and the television.

The scene is so dramatic that a news-reader from CNN could not stop herself from crying when she saw it. Of course, when we think about it, we notice that the child was not attended to by the medical personnel who gave him first aid, but by a group of extras, (the «White Helmets»), who placed him facing the cameras.

The British film directors care nothing about the child, whose only interest for them is as a feature in their images. According to Associated Press, the photograph was taken by Mahmoud Raslan, whom we can see in the video.

According to his Facebook account, this man is a member of Harakat Nour al-Din al-Zenki (supported by the CIA, who supplied the group with BGM-71 TOW anti-tank missiles). Still according to his Facebook account, and as confirmed by another video, it was Raslan who, on the 19 July 2016, personally cut the throat of a young Palestinian child, Abdullah Tayseer Al Issa (12 years old).

European laws lay down strict guidelines for the use of children in publicity. Clearly, these laws do not apply to war propaganda.