As the Geneva Peace talks enter into a stalemate, Moscow announces “Mission accomplished”,  namely the withdrawal of its forces from Syria.

“I believe that the task put before the defense ministry and Russian armed forces has, on the whole, been fulfilled. With the participation of the Russian military … the Syrian armed forces and patriotic Syrian forces have been able to achieve a fundamental turnaround in the fight against international terrorism and have taken the initiative in almost all respects, …

I am therefore ordering the defense minister, from tomorrow, to start the withdrawal of the main part of our military contingent from the Syrian Arab Republic.” (quoted by Reuters, March 14, 2016) 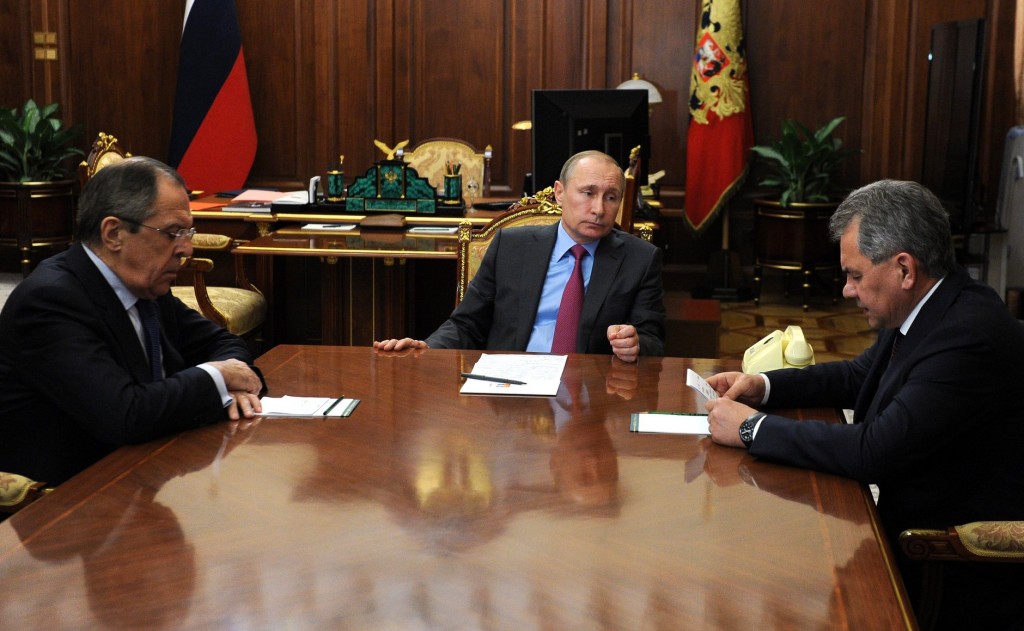 Emphasis will be put on establishing a diplomatic solution:

“The President of Russia also instructed the Foreign Ministry to intensify the Russian Federation’s participation in organising the peace process to resolve the Syrian problem.” (text of official communiqué, Russian presidency, March 14, 2016)

Russia is to maintain a military presence at its naval base in Tartous and at the Khmeymim airbase. In fact Russia is “withdrawing without withdrawing”.

The announcement of Russia’s withdrawal is nonetheless timely and significant. It is strategic. It has diplomatic implications. It coincides not only with “the peace talks”, it also confirms continued Russian military presence in Syria.

Moscow announces an official withdrawal while maintaining its military presence, its military aid and cooperation program with Damascus, its military and intelligence advisors and special forces, its support and advisory functions pertaining to Syria’s S400 Air Defence systems (see image below), its support with regard to logistics and military planning.

Russian aerial assets are staying in Syria, including their sophisticated S-400 anti-aircraft missiles that were deployed to the country after the Turkish Air Defense shot down a Russian fighter jet over the Latakia Governorate. However, the Hmaymim Airfields are fully secured and the Latakia Governorate is on the verge of being under the complete control of the Syrian Arab Army (SAA) and their allies. So, in reality, the Russian Marines stationed in the Latakia Governorate are not currently needed anymore. Making matters worse for the opposition, the Syrian Armed Forces and their allies are situated at both the eastern and western borders of the Idlib Governorate, leaving them within 15 km of the strategic cities of Jisr Al-Shughour and Saraqib.  Al-Masdar News, March 14, 2016

Moreover, the timing of this withdrawal remains unclear. President Putin confirmed that it would formally start on March 15. What will be the time span, what forces will be withdrawn, what forces will be retained? Moreover, many of Russia’s military operations are coordinated and carried out from air force and missile launching facilities in the Russian Federation.

Russian Ambassador to the UN Vitaly Churkin has said he would inform the UN Security Council about the beginning of Russian troops’ withdrawal from Syria. “These are informal consultations, but of course I am planning to discuss this,” he told reporters while on his way to a session of the UN Security Council. (RT, March 14, 2016)

What the “withdrawal” announcement suggests is that the thrust of military action will no longer require the routine deployment of Russia’s bombing raids directed against ISIS targets. In many regards, this (symbolic) announcement is a means for Moscow to consolidate its military presence in Syria.

The announcement constitutes a unilateral decision by Moscow. It was agreed upon by Damascus. Was it the object of prior consultations or negotiations with the West?

The announcement  essentially indicates that the real “war on terrorism” has largely been won by Syrian government forces together with the support of Russia, Iran and Hezbollah. The (US sponsored) terrorists have been defeated. Unofficially, it’s a slap in the face for Washington.

The Russian initiative to withdraw has the full support of the Syrian government:

In this context, Mr Putin said that Russia’s Armed Forces have fulfilled their main mission in Syria and a timetable for the withdrawal of the Aerospace Forces’ main air grouping has been agreed. Russia will maintain an aviation support centre in Syria in order to monitor compliance with the ceasefire.

The President of Syria noted the professionalism, courage and heroism of the Russian service personnel who took part in the military operations, and expressed his profound gratitude to Russia for providing such substantial help in fighting terrorism and providing humanitarian assistance to the civilian population.

Mr al-Assad said that he is ready to help organise a political settlement in the country as soon as possible. The two presidents expressed the hope that the full-format talks between Syrian Government officials and opposition representatives under UN aegis in Geneva will produce concrete results.  (Russian Presidency, March 14, 2016)

What will be president Obama’s response? How will the Obama sponsored “counter-terrorism” coalition respond?  Will the Western (US-NATO et al ) air raids be discontinued?

Lest we forget, the US sponsored  ”counter-terrorism” bombing raids were largely intended (unofficially of course) to protect rather than destroy the ISIS and other terrorist opposition formations including al Nusra.

This transition in the war agenda also coincides with the collapse of  the ISIS as a formal military and political entity. The smuggling of oil to Turkey has been destroyed and dismantled. Daesh-ISIS has lost its main sources of revenue. Its logistic and supply routes are in jeopardy:

Recent reports indicate that both the Islamic State has been decimated and that the ISIS (which is in part integrated by foreign mercenaries) is starting to go underground, namely to implement guerrilla warfare:

With recent losses on the Syrian battlefield and the Russian air raids against oil smugglers, ISIS militants in Iraq has become cut from a major part of its funding sources. This situation has decreased the ISIS’ ability of open confrontation with the regular forces.

Thus, it’s expected that ISIS will start to act in a guerrilla war style as a main approach. Marks of this we’ve been already seeing in Iraq.(South Front, March 14, 2016)

Large numbers of  ISIS and al Nusra fighters including foreign mercenaries have abandoned the battlefield and have joined the hordes of refugees.

Ironically, this “official’ Russian withdrawal also coincides with Turkey’s “unofficial’ invasion of Northern Syria, which in turn coincides with the Geneva peace talks under UN auspices in which both Russia and Turkey are participating in. “Theater of the absurd”.

Though Erdogan’s own generals have strongly advised against an all-out invasion of Syria, knowing the grave consequences for Turkey and its military would be catastrophic against the Russian coalition’s superior air and firepower, in the face of recent decisive victories achieved against Turkey’s proxy allies the ISIS and al Nusra terrorists, debate over whether Erdogan will actually bully his armed forces into launching a ground war invasion into Syria has been heavily speculated by both Turkish and Middle East press. (Joaquim Hagopian, Turkey “Invades” Syria on the Eve of Geneva “Peace Talks”, Global Research, March 14, 2016)

Moscow’s announcement of a withdrawal also constitutes a carefully designed response to Turkey’s undeclared and illegal invasion of Syria. Under NATO’s doctrine of collective security (Article 5 of the Washington Treaty), an “attack” on one NATO member country (i.e. Turkey) constitutes an attack on all NATO member states.

Moscow wants to foreclose US-NATO’s pretext and justification (under Article 5) to intervene directly on the ground against Syria and its allies in a scenario of military escalation. The latter has been on the drawing board of the Pentagon for several years prior to the onslaught of the war in March 2011.

In this regard, president Putin’s decision to withdraw indicates that Russia wants to avoid direct clashes or incidents with Turkish forces, which could potentially lead to escalation.

While Moscow seeks to consolidate its position in the diplomatic arena, Washington continues to insist at the Geneva talks that the only avenue is “regime change” requiring president al Assad to step down.