The NATO Campaign against Freedom of Expression

This is a long story which extends over fifteen years. NATO first attempted to silence those citizens who were trying to discover the truth about the attacks of 11 September 2001.

Then it turned on those who contested the oficial version of the «Arab Springs» and the war against Syria. One thing leading to another, it then attacked those who denounced the coup d’état in Ukraine.

Now NATO is behind the accusations by a pseudo-NGO that the people who campaigned for Donald Trump are Russian agents.

The attacks of 11 September 2001 were followed by a permanent state of emergency and a series of wars. As I wrote at the time, the theory that they were directed by a group of jihadists from a cave in Afghanistan does not stand up to analysis.

On the contrary, everything points to the conclusion that the attack were organised by a faction of the military-industrial complex.

If this analysis is correct, the course of events could only lead to repression in the United States and the Allied states.

Fifteen years later, the wound that I opened is still not shut – in fact the opposite is true, given the events that followed. The «Arab Springs» were added to the Patriot Act Patriot and the oil wars which followed.

Not only does the majority of the US population no longer believe what the government has been telling it since 9/11, but by voting for Donald Trump, it has expressed its rejection of the post-9/11 system.

It so happens that I opened the debate on 9/11 to the world, that I was part of the last government of the Libyan Arab Jamahiriya, and that I report on the war against Syria from the ground.

At first, the US administration thought that they could extinguish the blaze by accusing me of writing contentious rubbish for money, hitting me where they thought it would hurt most, in other words, my wallet. And yet my ideas have never ceased to spread.

In October 2004, when 100 US personalities signed a petition demanding the re-opening of the enquiry on the attacks of /9/11, Washington began to worry [1].

In 2005, in Brussels, I gathered more than 150 personalities from all over the world – including Syrian and Russian guests such as the ex-Chief of Staff for the Federation armies, General Leonid Ivashov – to denounce the neo-conservatives, and demonstrate that the problem was becoming global [2].

While during the mandate of Jacques Chirac, the Elysée worried about my safety, in 2007 the Bush administration asked newly-elected President Nicolas Sarkozy to have me physically eliminated.

When I was warned by a friend, an officer of the Staff, that Sarkozy’s response had been positive, there was only one way out left to me – exile. My other friends – for thirteen years I had been the national secretary of the Parti Radical de Gauche – stared at me in disbelief, while the Press accused me of spiralling into paranoïa.

No-one came publicly to my help. I found refuge in Syria, and travelled the world outside of NATO territory, escaping numerous assassination or kidnap attempts. For the last fifteen years, I have been opening debates which have become generalised.

I have always been attacked when I was alone, but when my ideas have been shared, thousands of people have been persecuted for having analysed and developed them.

It was during this same period that Cass Sunstein (husband of US ambassador to the UNO, Samantha Power [3]) wrote a mémoire with Adrian Vermeule for the universities of Chicago and Harvard concerning the struggle against «conspiracy theories» – the name they gave to the movement I had initiated. In the name of the defence of «Liberty» confronted by extremism, the authors defined a programme to annihilate this opposition:

We can easily imagine a series of possible reponses.

1. The government could forbid conspiracy theories.

2. The government could impose a sort of tax, financial or other, on those who distribute such theories.

3. The government could engage in counter-discussion to discredit conspiracy theories.

4. The government could engage credible private parties in a counter-discussion.

5. The government could engage in informal communication with third parties and encourage them» [4].

The Obama administration hesitated to publicly choose this path. But in April 2009, at the NATO summit in Strasbourg-Kehl, it proposed to create a «Strategic Communication Service». It also fired Anthony Jones from the White House in 2009, because the famous lawyer had spoken bluntly on the subject [5].

The project for NATO’s Strategic Communication Service slept in boxes until the Latvian government manifested itself. It was finally set up in Riga under the direction of Janis Karklinš – who was also an executive at the UNO World Summit on the Information Society and the Forum on the Governance of the Internet.

Conceived by the British, it included participations from Germany, Estonia, Italy, Luxembourg, Poland and the United Kingdom. In the beginning, it limited itself to producing an increasing number of studies.

Everything changed in 2014 when the Khodorkovsky family think tank, the Institute of Modern Russia in New York, published an analysis by journalists Peter Pomerantsev and Michael Weiss [6]. According to their report, Russia had deployed a vast propaganda system abroad. However, rather than presenting themselves in a favourable light, as they had sone during the Cold War, Moscow had allegedly decided to inundate the West with «conspiracy theories» in order to create general confusion. And the authors also specified that these «theories» no longer concerned just 9/11, but also the coverage of the war against Syria.

By seeking to reactivate the anti-Soviet feelings of the Cold War, this report marked a turning-pont in values. Until then, the US ruling class had sought only to mask the crime of 11 September, by accusing a handful of insignificant «beards». From now on, the aim was to accuse a foreign state of being responsible for the crimes committed by Washington in Syria.

In September 2014, the British government created the 77th Brigade, a unit tasked with countering foreign propaganda. It was composed of 440 soldiers plus a thousand civilians from the Foreign Office, including MI6, and the Co-operation and Stabilisation Unit. We do not know what their targets were.

This brigade worked with the 361st Civil Affairs Brigade of the US Land Army (based in Germany and Italy). The military units were used to disturb Western Internet sites which were trying to establish the truth about 11 September as well as the war against Syria.

At the start of 2015, Anne Applebaum (wife of the Polish ex-Minister for Defence, Radosław Sikorski), created within the Washington Center for European Policy Analysis a unit called the Information Warfare Initiative [7].

It was originally intended to counter Russian information in Central and Eastern Europe. It entrusted Peter Pomerantsev (mentioned above) with this initiative, as well as Edward Lucas, one of the chief editors of The Economist.

Even though Pomerantsev was both the co-reporter for the Institute of Modern Russia and the assistant chief executive of the Information Warfare Initiative, he no longer mentioned 9/11, and no longer considered the war against Syria to be central, but only as a recurring theme which enabled him to speculate about the actions of the Kremlin. He concentrated his attacks on the TV channel Russia Today and the Press agency Sputnik, two Russian public organisms.

In February 2015, the Fondation Jean-Jaurès, think tank of the French Socialist Party and contact for the National Endowment for Democracy (NED), published in its turn a Note, Conspirationism, state of play [8]. It ignored the developments concerning Russia, and picked up the debate where Cass Sunstein had left it.

She recommended, purely and simply, to forbid the «conspiracy theorists» to express themselves. From his side, the Minister of Education organised workshops in schools to warn school-children against these «conspirationists ».

On 19 and 20 March 2015, the European Council asked the High Representative Federica Mogherini to prepare a plan of «strategic communication» to denounce the Russian disinformation campaigns concerning Ukraine.

The Council mentioned neither 9/11 nor the war against Syria, and changed targets to concentrate exclusively on the events in Ukraine.

In April 2015, Madame Mogherini created within the European External Action Service (EEAS) a Strategic Communications Unit [9]. She was directed by an agent of the British MI6, Giles Portman. 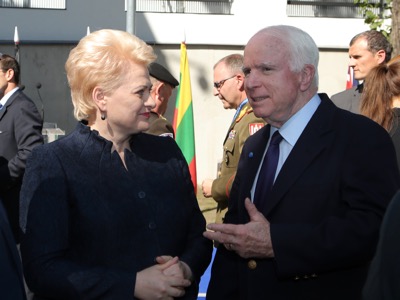 On 20 August 2015, NATO’s Centre of Strategic Communication was inaugurated in Riga under the direction of Jānis Sārts, and in the presence of the director of a branch of the National Endowment for Democracy, John McCain (seen here in conversation with Lithuanian President Dalia Grybauskaitė).
Photo : Gatis Dieziņš

Inspired by NATO, on 23 November 2016, the Polish ex-Minister for Foreign Affairs and now European Deputy, Anna Fotyga, forced through the European Parliament a resolution about «Strategic Communication of the Union aimed at countering propaganda directed against her by third parties» [10].

Once again the target had been displaced – it was no longer a case of countering the dispute over 9/11 (now 15 years old), nor that of the war against Syria, but to create an amalgam between the contesting positions on the events in Ukraine, and Daesh.

Launched by a resounding article in the Washington Post, on 24 Novembre 2016 [11], a mysterious group entitled Propaganda or Not? established a list of de 200 Internet sites – including Voltairenet.org – who were allegedly tasked by the Kremlin with relaying Russian propaganda and intoxicating US public opinion to the point where they elected Donald Trump.

While Propaganda or Not? does not publish the names of its directors, it does indicate that it unites four organisations – Polygraph, The Interpreter, the Center for European Policy Analysis and the Digital Forensic Research Lab.

Polygraph is one of the sites of Voice of America, the US public radio and television organisation controlled by the Broadcasting Board of Governors.

The Interpreter is a magazine of the Institute of Modern Russia, now broadcast by Voice of America.

The Center for European Policy Analysis is a pseudopod of the National Endowment for Democracy (NED) directed by Zbigniew Brzeziński and Madeleine Albright.

And finally, the Digital Forensic Research Lab is a programme of the Atlantic Council.

In a document distributed by Propaganda or Not?, this pseudo-NGO, born of associations financed by the Obama administration, clearly names its enemy – Russia. It accuses Russia of having been the origin of the 9/11 Truth Movement and the Internet sites supporting Syria and Crimea.

On 2 December 2016, the United States Congress voted a law forbidding all military co-operation between Washington and Moscow. In the space of a few years, NATO has re-activated MacCarthyism.