The Orlando Shootings: Police SWAT Team Involved in the Killings?

The first reports of shots came at 2.03am involving a confrontation between Mateen and a security guard at the entrance of the nightclub   ”An off-duty cop working as a security guard at the club returned fire, prompting Mateen to retreat further into the hotspot and take hostages, officials said.” (New York Post, June 12, 2016).

According to police statements, there was, however, no “active shooter situation” at 2am in the morning, requiring an immediate police response. Moreover, there was no firm evidence that killings of hostages had taken place. 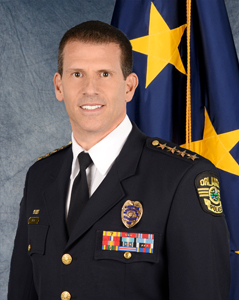 The Orlando police authorities initiated a process of negotiation with Mateen. When Mateen said that “there would be an imminent loss of life,” Orlando Police Chief John Mina (image right) was prompted “to end a three-hour standoff and ordered the assault that killed Mr. Mateen and freed dozens of people trapped in the club.” (New York Times, June 13, 2016).

Shortly after 5am, the police using an armored vehicle burst through the wall of the building. “A furious gunfight with 11 SWAT team members followed, during which Mateen was killed and a cop was saved from death when a shot struck his Kevlar helmet”. (New York Post ,June 12, 2016).

The Islamic State (ISIS) allegedly claimed responsibility for the attack in a statement released by its Amaq news agency, saying the onslaught “was carried out by an Islamic State fighter,” (Ibid).

The official FBI police report acknowledges shootings at 2am, it does not confirm the occurrence of killings of hostages prior to 5am. The killings started when the Police SWAT Teams stormed the Building at 5.13am. (see Timeline Below)

The Orlando Police Department Timeline summarized in an FBI Tampa Press release not only suggests that no one was killed before 5.13am when the SWAT team broke into the building, it also confirms that the first deadly shots were fired at 5.14am and that the suspect was killed one minute later at 5.15am. This assessment was confirmed by Judge Napolitano in a Fox News report. 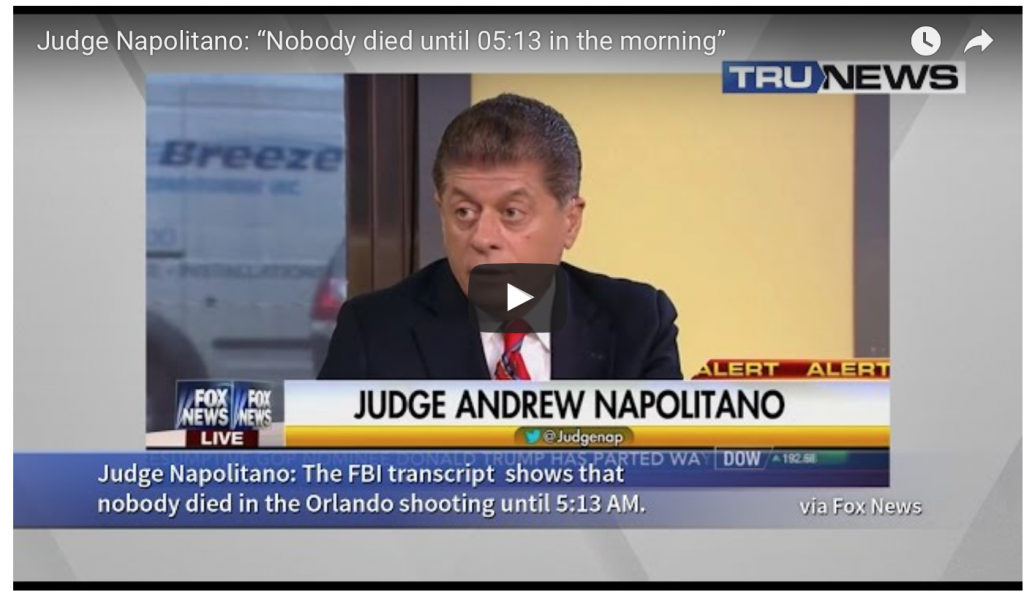 The Police report does however acknowledge that individual SWAT members entered the building before 5am. According to the head of the SWAT team Capt. Mark Canty [image below] “both SWAT and patrol officers pulled “several” people out of the club during the three-hour standoff.” 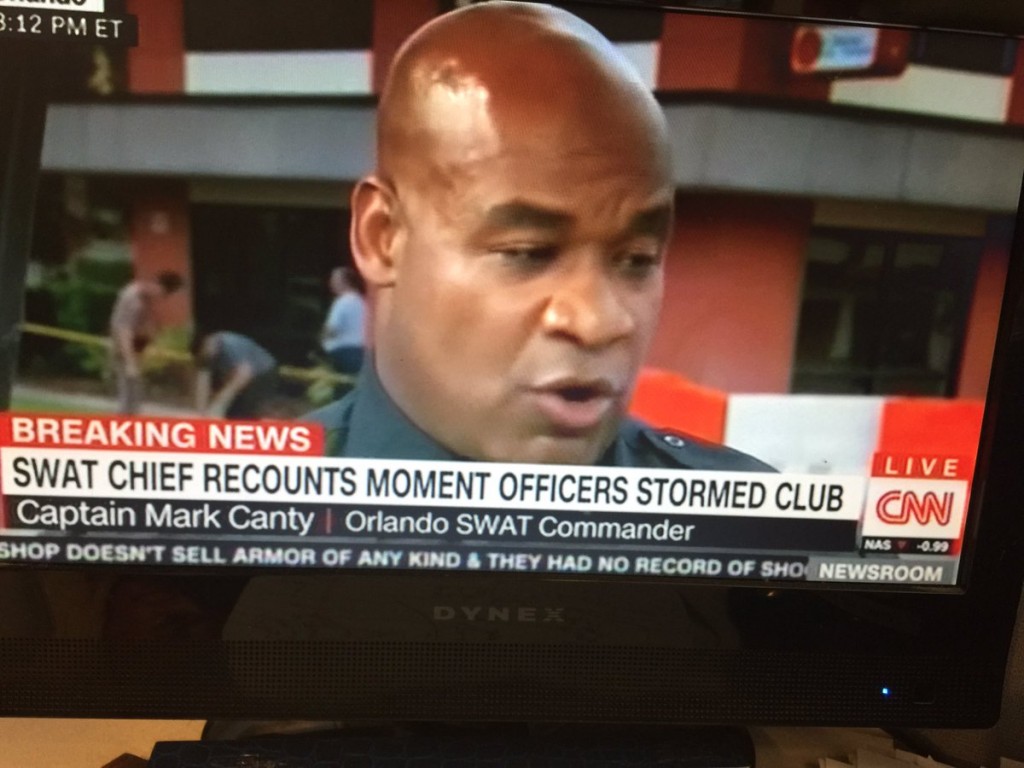 The Killing of Omar Mateen

Mateen was allegedly involved in an exchange of gunfire with the SWAT team starting at 5.13am, While under attack of the SWAT team, Mateen could not have killed and injured over 100 people in 1-2 minutes; the FBI report confirms that he was killed at 5.15pm.

According to the Orlando Sentinel:

After most of the hostages got out, Mateen emerged from the first hole [in the wall] around 5:14 a.m.

There was a barrage of shots and Mateen was taken down in that hallway. [at 5.15am]

Barely mentioned by the mainstream media, police officials have acknowledged that some of the killings could have been perpetrated (“accidentally”) by the SWAT officers:

“The Orlando Chief of Police John Mina and other law enforcement officers offered new details about the shooting, including the possibility that some victims may have been killed by officers trying to save them.” (Naples Daily News, June 14, 2016)

Killing them in order to save them? An upside down diabolical concept. Kill with a view to saving lives?

It should however be mentioned that Orlando Police Chief John Mine was not directly in charge of the SWAT operation per se. The latter was under the command of  Capt. Mark Canty.

Police Chief John Mina intimated that 8-9 SWAT officers might have killed people in the nightclub by accident (see quote below).

This important “detail” revealed by the Orland Chief of Police did not make the headlines of the mainstream media. It was reported locally in Florida, (Florida Naples News). It was not picked up by the national news media: 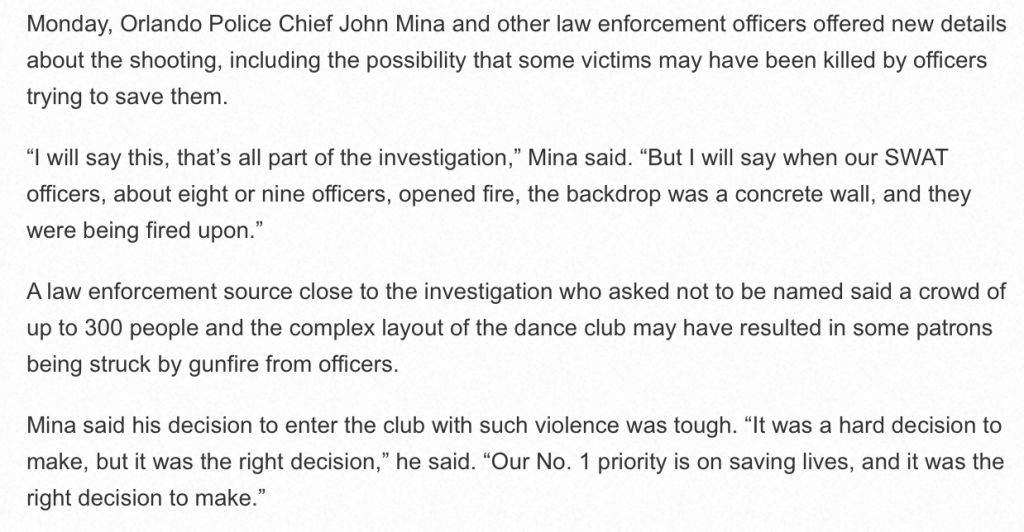 … Orlando officers walked into the nightclub and found lifeless club patrons strewn about a bar and lounge area. More bodies were found in a nearby bathroom.

Saving People by Killing them? “New Normal”? The SWAT police officers were celebrated as HEROES by the mainstream media “for having saved dozens of lives”. 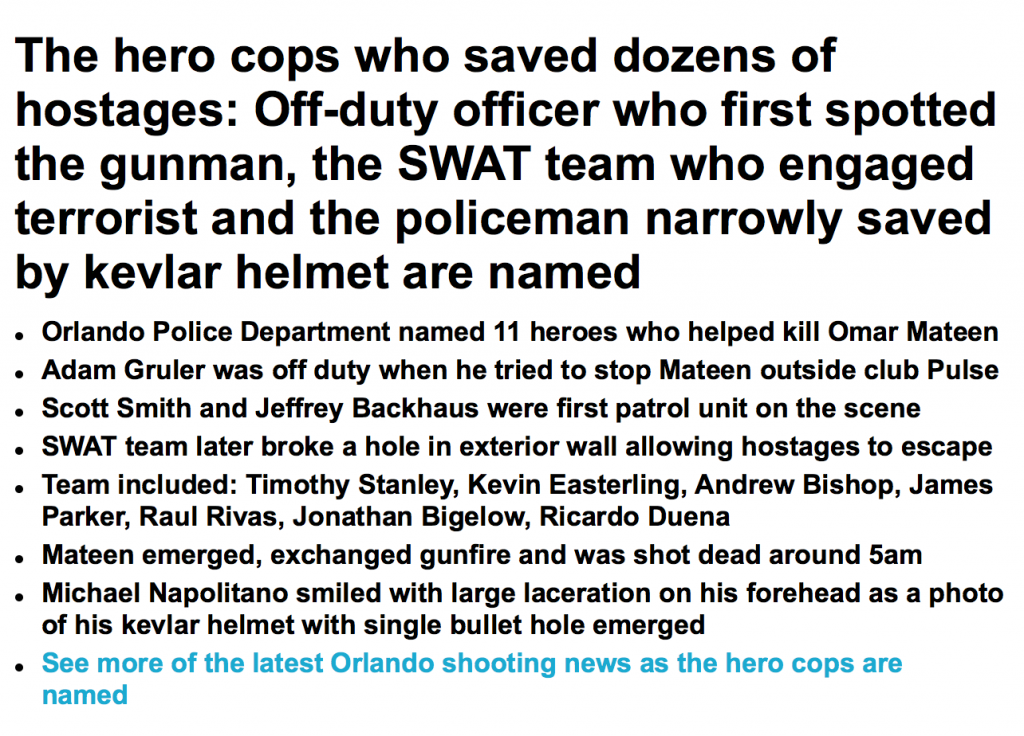 The possibility of SWAT killings at the Pulse nightclub was acknowledged and then casually dismissed by the Washington Post (June 20, 2016):

“The FBI is still working to determine if any of the victims at Pulse were hit by police fire, according to a U.S. law enforcement official who spoke on the condition of anonymity to discuss an ongoing investigation… The SWAT commander at Pulse said Sunday he was not sure if any victims may have been struck by officers’ gunfire, and the chief medical examiner has said he does not know.” (emphasis added)

No further investigation by the Washington Post was required.

Were the Victims shot by Omar Mateen or by the Police SWAT Team?

The Orlando Police Department Timeline (see below) (quoted by Judge Napolitano) suggests that no one was killed before 5.13am when the SWAT team stormed the building, it also confirms that the first deadly shots were fired at 5.14am and that the suspect was killed one minute later at 5.15am.

Within the scope of 1-2 minutes, Mateen is said to have killed 49 people and injured 53. And this happened while the suspect was been fired at by the SWAT team.

The reports are contradictory: First they say that the SWAT team was being fired upon by the suspect (see quote above) “who had hid in the bathroom”  and then they acknowledge that he was killed when the hostages started pouring out of the building (through a hole in the wall, when they broke down the wall):

“A cop rammed his Bearcat armored vehicle through the club wall. Hostages poured out. So did Mateen, guns blazing. With quick efficiency, officers shot him dead.” (Naples Daily News, June 13, 2016)

What the  above statement suggests is that Mateen was executed at point blank (“with efficiency”) upon exiting the building through a hole in the wall with members of the SWAT team waiting to kill him upon his exit through the hole. If Mateen had known that he was to be executed, he would not have attempted to exit the building through the hole in wall together with hostages. (see image below)

Reports suggest that  there was an extensive exchange of fire between Mateen and the SWAT team: “Omar Mateen, 29, was killed by police when he engaged them in a gun battle.” In the same Naples News report, quoting Chief of Police Mina:

“There’s a hole in the wall about two feet off the ground and three feet wide. We were able to rescue dozens and dozens of people who came out of that wall,” Mina said. “The suspect came out of that hole himself with a handgun and a long gun and engaged in a gun battle with officers where he was ultimately killed.”

Visibly this statement by Chief of Police Mina is convoluted to say the least: it would have been almost impossible for Mateen to have effectively engaged the SWAT officials upon exiting the hole in the wall. (See image). Mateen’s fate was similar to that of the dead (alleged ISIS-Daesh) terror suspects killed rather than arrested by the police in Brussels and Paris terror attacks.

The official story is that Mateen killed 49 people and injured 53 on the orders of the Islamic State (ISIS-Daesh).

And this allegedly took place –according to the OPD time line– in a lapse of 1-2 minutes before he was shot dead at 5.15am, while leaving the building through a hole in the wall.

There were eleven SWAT police officers who stormed the building at 5.13am; the suspect was reported dead at 5.15am. According to the Orlando Police Chief, 8 or 9 out of the 11 SWAT officers accidentally shot at the hostages. The statement of Orlando Police Chief Mina does not refer to an error of one or two SWAT officers, the entire SWAT team (8 or 9 out of 11) under the helm of SWAT Commander Capt. Canty “accidentally” fired at the nightclub patrons.

Did Mateen have the ability of shooting and killing 49 people and injuring 53 in the course of less than 2 minutes while also exiting the building through a hole in the wall at 5.14am and confronting the SWAT team in cross-fire.  Is this corroborated by the CCCTV footage?

The autopsy reports as well as the ballistic reports have not been released. 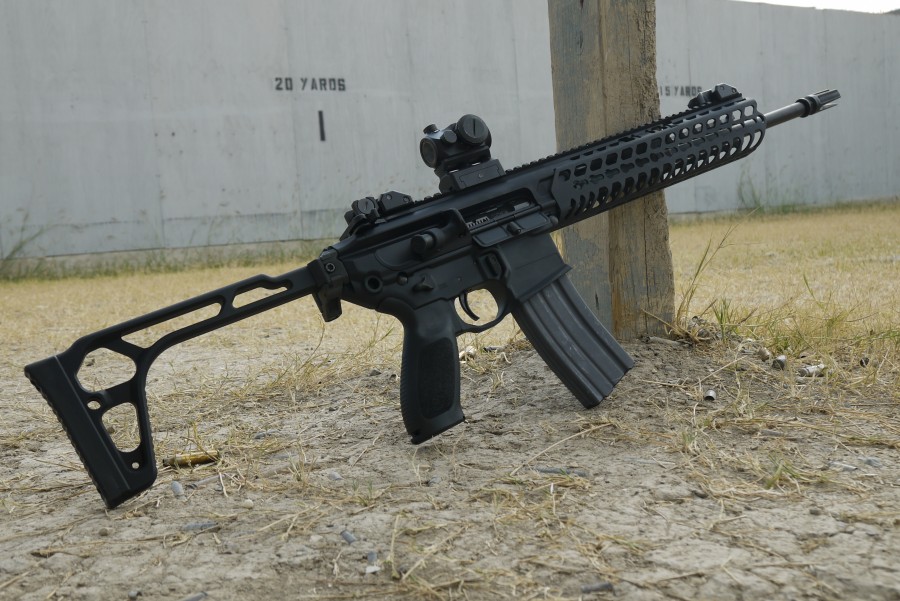 1. the semi-automatic parameters of  the two weapons in his possession would not have allowed Omar Mateen to fire more than one hundred shots within a 1-2 minutes without magazine reloading. Note the time line: 5.13am-5.15am. 5.15am: Mateen is recorded dead.

See the video below which indicates the semi-automatic nature of the Sig Sauer MCX.

In this regard, the nature of Mateen’s semi-automatic weapons was acknowledged by a USA Today Report which intimates that some of killings were attributable to “friendly” police fire:

“It’s unclear how many rounds Mateen had with him, and authorities are investigating whether some of those killed were hit by friendly fire”. (emphasis added)

The USA Today’s couched statement tacitly recognizes that the SWAT officers might have been responsible for the some of the deaths inside the Pulse nightclub. But that truth has to be suppressed. It is not worthy of  detailed investigation.

2. Both the SIG Sauer as well as the Glock 17 9mm firearms used by Mateen were also used by the police SWAT teams, which suggests that the ballistics for gunshot casualties in the Orlando nightclub (by Mateen and the SWAT team) would be hard to distinguish.

Bear in mind, irrespective of the number of magazine loads Mateen had in his possession, he would not have been able to kill and/or injure more than one hundred people in a time span of less than 2 minutes.

What is at stake is a coverup of what happened inside the nightclub which is casually acknowledged and at the same time denied by the mainstream media.

The unspoken truth is dismissed, the facts are twisted.

What we are dealing with is an orchestrated coverup. The Forbidden Truth has to be suppressed.

Lies, “half truths” and innuendos in mainstream media reporting. Nonetheless, straight from “The Horse’s Mouth”, the SWAT police team was allegedly involved in the Orlando Pulse nightclub killings:

“the possibility that some victims may have been killed by officers trying to save them.” (Naples Daily News, June 14, 2016)

… [A]uthorities are investigating whether some of those killed were hit by friendly fire”. (emphasis added)

“The FBI is still working to determine if any of the victims at Pulse were hit by police fire,

“The SWAT commander [Capt. Canty] at Pulse said Sunday he was not sure if any victims may have been struck by officers’ gunfire”

The Obama Administration, the FBI, the Media have casually dismissed the possibility of police involvement in the killings despite the statements emanating from police sources. Theater of the absurd: The official story is that the killings were ordered by the Islamic State (ISIS, ISIL, Daesh) based in Raqqa, Northern Syria, which happens to be supported and financed by two of America’s staunchest allies, Turkey and Saudi Arabia in close liaison with Washington.

The CCTV camera footage which is available to law enforcement officials will, most probably, not be made public.

The original source of this article is Global Research.