George Soros intends to co-opt the third world nations by calling for the participation of developing countries as part of the solution. The direction of the new system however, will still be in the hands of globalists like him and their elected puppets in every country.

On April 8, a group he’s funded with $50 million is holding a major economic conference and Soros’s goal for such an event is to “establish new international rules” and “reform the currency system.” It’s all according to a plan laid out in a Nov. 4, 2009, Soros op-ed calling for “a grand bargain that rearranges the entire financial order.”

The event is bringing together “more than 200 academic, business and government policy thought leaders’ to repeat the famed 1944 Bretton Woods gathering that helped create the World Bank and International Monetary Fund. Soros wants a new ‘multilateral system,” or an economic system where America isn’t so dominant.

More than two-thirds of the slated speakers have direct ties to Soros. The billionaire who thinks “the main enemy of the open society, I believe, is no longer the communist but the capitalist threat” is taking no chances.

Thus far, this global gathering has generated less publicity than a spelling bee. And that’s with at least four journalists on the speakers list, including a managing editor for the Financial Times and editors for both Reuters and The Times. Given Soros’s warnings of what might happen without an agreement, this should be a big deal. But it’s not.

What is a big deal is that Soros is doing exactly what he wanted to do. His 2009 commentary pushed for “a new Bretton Woods conference, like the one that established the post-WWII international financial architecture.” And he had already set the wheels in motion.

Just a week before that op-ed was published, Soros had founded the New York City-based Institute for New Economic Thinking (INET), the group hosting the conference set at the Mount Washington Resort, the very same hotel that hosted the first gathering. The most recent INET conference was held at Central European University, in Budapest. CEU received $206 million from Soros in 2005 and has $880 million in its endowment now, according to The Chronicle of Higher Education.

This, too, is a gathering of Soros supporters. INET is bringing together prominent people like former U.K. Prime Minister Gordon Brown, former Fed Chairman Paul Volcker and Soros, to produce “a lot of high-quality, breakthrough thinking.”

While INET claims more than 200 will attend, only 79 speakers are listed on its site – and it already looks like a Soros convention. Twenty-two are on Soros-funded INET’s board and three more are INET grantees. Nineteen are listed as contributors for another Soros operation – Project Syndicate, which calls itself “the world’s pre-eminent source of original op-ed commentaries” reaching “456 leading newspapers in 150 countries.” It’s financed by Soros’s Open Society Institute. That’s just the beginning.

Former World Bank Economist, Joseph Stiglitz, a friend of Soros and who once spoke of the catastrophes caused by the World Bank, will speak at the event.

Have no doubt about it: This is a Soros event from top to bottom. Even Soros admits his ties to INET are a problem, saying, “there is a conflict there which I fully recognize.” He claims he stays out of operations. That’s impossible. The whole event is his operation.

INET isn’t subtle about its aims for the conference. Johnson interviewed fellow INET board member Robert Skidelsky about “The Need for a New Bretton Woods” in a recent video. The introductory slide to the video is subtitled: “How currency issues and tension between the US and China are renewing calls for a global financial overhaul.” Skidelsky called for a new agreement and said in the video that the conflict between the United States and China was “at the center of any monetary deal that may be struck, that needs to be struck.”

Soros described in the 2009 op-ed that U.S.-China conflict as “another stark choice between two fundamentally different forms of organization: international capitalism and state capitalism.” He concluded that “a new multilateral system based on sounder principles must be invented.” As he explained it in 2010, “we need a global sheriff.”

In the 2000 version of his book “Open Society: Reforming Global Capitalism,” Soros wrote how the Bretton Woods institutions “failed spectacularly” during the economic crisis of the late 1990s. When he called for a new Bretton Woods in 2009, he wanted it to “reconstitute the International Monetary Fund,” and while he’s at it, restructure the United Nations, too, boosting China and other countries at our expense.

“Reorganizing the world order will need to extend beyond the financial system and involve the United Nations, especially membership of the Security Council,’ he wrote. ‘That process needs to be initiated by the US, but China and other developing countries ought to participate as equals.”

Soros emphasized that point, that this needs to be a global solution, making America one among many. “The rising powers must be present at the creation of this new system in order to ensure that they will be active supporters.”

And that’s exactly the kind of event INET is delivering, with the event website emphasizing “today’s reconstruction must engage the larger European Union, as well as the emerging economies of Eastern Europe, Latin America, and Asia.” China figures prominently, including a senior economist for the World Bank in Beijing, the director of the Chinese Academy of Social Sciences, the chief adviser for the China Banking Regulatory Commission and the Director of the Center on U.S.-China Relations. 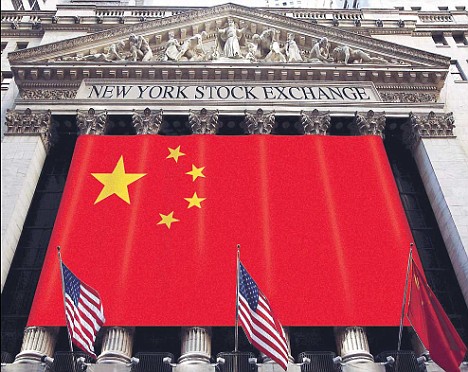 George Soros intends to lift Comunist China as the new World's Superpower, just as globalists like Soros 'created' The United States after WWII.

This is all easy to do when you have the reach of George Soros who funds more than 1,200 organizations. Except, any one of those 1,200 would shout such an event from the highest mountain. Groups like MoveOn.org or the Center for American Progress didn’t make their names being quiet. The same holds true globally, where Soros has given more than $7 billion to Open Society Foundations – including many media-savvy organizations just a phone call away. Why hasn’t the Soros network spread the word?

Especially since Soros warns, all this needs to happen because “the alternative is frightening.” The Bush-hating billionaire says America is scary “because a declining superpower losing both political and economic dominance but still preserving military supremacy is a dangerous mix.”

The Soros empire is silent about this new Bretton Woods conference because it isn’t just designed to change global economic rules. It also is designed to put America in its place – part of a multilateral world the way Soros wants it. He wrote that the U.S. “could lead a cooperative effort to involve both the developed and the developing world, thereby reestablishing American leadership in an acceptable form.”

That’s what this conference is all about – changing the global economy and the United States to make them “acceptable” to George Soros.