In August 2014, Israel participated in driving out the Blue Helmets from the Golan buffer zone, and for two years entrusted this territory to al-Qaeda, to which it guarantees logistics. Then, Benjamin Netanyahu announced his intention to violate Resolution 338 and to annex Golan under occupation. This was the last straw. The US and the Russian Federation have decided to call Tel-Aviv to heel.

The Security Council should soon adopt a resolution co-drafted by the United States and the Russian Federation on the United Nations Force mandated with observing disengagement (UNDOF), namely, the Blue Helmets charged with controlling the buffer zone between Israel and the Syrian Arab Republic on the plateau of Golan.

Al-Qaeda imprisoned 45 Fijians Blue Helmets and then set them free after receiving a ransom via bank transfer.

On 28 August 2014, the Al Nusra Front (al-Qaeda) gained entry to the buffer zone and takes 45 Fijian Blue Helmets hostage. Violating UN orders, Philippine Blue Helmets tried to save them. Finally, some Irish Blue Helmets accompanied by Israeli soldiers managed to establish contact with the jihadists. The result of lengthy negotiations: the UN refused to withdraw al-Nusra from the list of terrorist organizations but agreed to pay a ransom by bank transfer(!). It was not the UN that announced that the hostages had been released, but the Syrian Observatory on Human Rights, an NGO based in London serving as a cover for the MI6. The United Nations never had reasoned their order to release the Fijians, nor have they launched an investigation into al-Qaeda’s bank account. 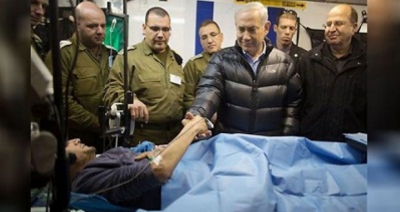 Here the Israeli Prime Minister Benjamin Netanyahu is congratulating the jihadists of al-Qaeda treated in Israel.

Since then, there are no more Blue Helmets to ensure that Resolution 338 is enforced; this role has been delegated to al-Qaeda. When jihadists are attacked and wounded by the Syrian Arab Army, they withdraw onto Israeli territory and are cared for at the Ziv Medical Centre. Then they are led out by the Israeli army to the border to resume fighting.

On 17 April 2016, Israel committed an act of provocation by organizing a Council of Ministers in Golan. There Prime Minister Benjamin Netanyahu declared that his country would never enforce resolution 338 and would never return Golan.

On 14 June 2016, the former Prime Minister Ehud Barak had denounced the irresponsible policy of Mr Netanyahu and called upon Israeli leaders to depose him using all possible means.

Israeli soldiers entrusted the buffer zone to al-Qaida rather than to UNDOF.

“the Security Council emphasizes that there should not be any military activities of opposition armed groups in the buffer zone and urgently implores the Member States to clearly indicate to armed Syrian opposition groups present in the zones where UNFOD is operating that they must cease all activity that risk endangering peace-keeping soldiers and grant UN personnel the freedom they need to discharge their mandate in safety;

ask all other groups that are not the UNFOD to abandon all positions of the Force as well as point of passage of Quneïtra and to return vehicles, weapons and all other material belonging to the Blue Helmets.”

For sixty years, Israel has been denouncing the danger of Arab and Muslim terrorism, whereas in Golan, it has helped to drive out UNDOF and has entrusted the buffer zone to al-Qaeda.

Therefore, after two years of violating international law, the Security Council should redeploy the UNDOF and order Israel to stop supporting a terrorist organization.

To date, the State of Israel hardly ever respected a single Security Council Resolution that applied to it.