‘Smart dust’ aims to monitor everything. No Joke.

In the 1990s, a researcher named Kris Pister dreamed up a wild future in which people would sprinkle the Earth with countless tiny 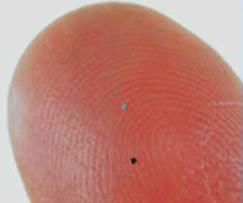 sensors, no larger than grains of rice.

These “smart dust” particles, as he called them, would monitor everything, acting like electronic nerve endings for the planet. Fitted with computing power, sensing equipment, wireless radios and long battery life, the smart dust would make observations and relay mountains of real-time data about people, cities and the natural environment.

Now, a version of Pister’s smart dust fantasy is starting to become reality.

“It’s exciting. It’s been a long time coming,” said Pister, a computing professor at the University of California, Berkeley.

“I coined the phrase 14 years ago. So smart dust has taken a while, but it’s finally here.”

Maybe not exactly how he envisioned it. But there has been progress.

The latest news comes from the computer and printing company Hewlett-Packard, which recently announced it’s working on a projectit calls the “Central Nervous System for the Earth.” In coming years, the company plans to deploy a trillion sensors all over the planet.

The wireless devices would check to see if ecosystems are healthy, detect earthquakes more rapidly, predict traffic patterns and monitor energy use. The idea is that accidents could be prevented and energy could be saved if people knew more about the world in real time, instead of when workers check on these issues only occasionally.

HP will take its first step toward this goal in about two years, said Pete Hartwell, a senior researcher at HP Labs in Palo Alto. The company has made plans with Royal Dutch Shell to install 1 million matchbook-size monitors to aid in oil exploration by measuring rock vibrations and movement, he said. Those sensors, which already have been developed, will cover a 6-square-mile area.

That will be the largest smart dust deployment to date, he said.

“We just think now, the technology has reached a point where it makes basic sense for us … to get this out of the lab and into reality,” Hartwell said.

Smart dust (minus the ‘dust’)

Despite the recent excitement, there’s still much confusion in the computing industry about what exactly smart dust is.

For starters, the sensors being deployed and developed today are much larger and clunkier than flecks of dust. HP’s sensors — accelerometers like those in the iPhone and Droid phone, but about 1,000 times more powerful — are about the size of matchbooks. When they’re enclosed in a metal box for protection, they’re about the size of a VHS tape.

So what makes a smart dust sensor different from a weather station or a traffic monitor?

Size is one factor. Smart dust sensors must be relatively small and portable. But technology hasn’t advanced far enough to manufacture the sensors on the scale of millimeters for commercial use (although Berkeley researchers are trying to make one that’s a cubic millimeter).

Wireless connections are a big distinguisher, too. A building’s thermostat is most likely hard-wired. A smart dust sensor might gauge temperature, but it would be battery-powered and would communicate wirelessly with the internet and with other sensors.

The sheer number of sensors in the network is what truly makes a smart dust project different from other efforts to record data about the world, said Deborah Estrin, a professor of computer science at the University of California, Los Angeles, who works in the field.

Smart dust researchers tend to talk in the millions, billions and trillions.

Some say reality has diverged so far from the smart dust concept that it’s time to dump that term in favor or something less sexy. “Wireless sensor networks” or “meshes” are terms finding greater acceptance with some researchers.

Estrin said it’s important to ditch the idea that smart dust sensors would be disposable.

Sensors have to be designed for specific purposes and spread out on the land intentionally — not scattered in the wind, as smart dust was initially pitched, she said.   More…