If you are part of the Wall Street establishment, the economic recovery is moving along quite well.  Many of the biggest firms on 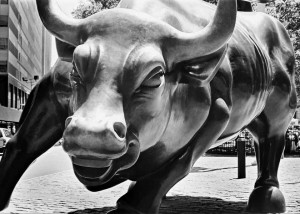 Wall Street just handed out record-setting bonuses, the Stock Market has been moving up steadily and the DOW is back up to around 11,000.  Profits at the top banks have been quite impressive lately.  Bank of America, JPMorgan Chase, Citigroup and Wells Fargo combined for first quarter profits of $13.4 billion – the most in almost three years.  Yes, life is quite good down on Wall Street these days.  People are still buying fast cars, big yachts and homes in the Hamptons.  It is almost as if “the greatest financial crisis since the Great Depression” didn’t even happen.  Things are quickly getting back to “normal” for the banking elite and to many it seems like there are a lot more smiles down on Wall Street than there have been in a long, long time.

Bank of America’s chief executive officer, Brian T. Moynihan, is being quoted by Reuters as saying that “the worst of the credit cycle is clearly behind us” and that the economic growth we are experiencing is “real”.

JPMorgan CEO Jamie Dimon is quoted as saying that the U.S. economy may be poised for “a strong recovery”.

And why wouldn’t they say these things?  Profits are up.  Their stock portfolios are up.  They are getting record bonuses.  They know that if anything does go wrong again that their friends in Washington D.C. will bail them out because they are “too big to fail”.

But for tens of millions of other Americans, the economy seems like it is getting worse than ever.  It is hard to explain the gut-wrenching agony that many highly-educated and highly-qualified American workers are going through as they send out hundreds of resumes only to get no response.  Or the absolute frustration of only being able to get a very low paying retail job and realizing that it will not even be able to pay the mortgage – much less support an entire family.  Or the soul-crushing despair of working two or three jobs and still not being able to pay the bills at the end of the month.

But these are the daily realities that millions of Americans must face now.  The truth is that there are not nearly enough jobs for everyone.  The number of unemployed Americans per job opening hit 5.5 in February.  It is like we are all caught in some bizarre game of musical chairs, and the losers end up destitute and out in the street.

Even many of those who can get jobs find themselves in bad situations.  Gallup’s underemployment measure hit 20.0% on March 15th.  That was up from 19.7% two weeks earlier and 19.5% at the start of the year.  A lot of very educated, very qualified people find themselves slaving away at jobs that high school students are qualified for. 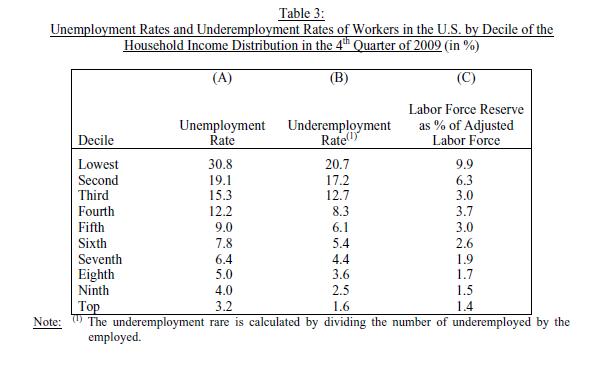 It isn’t the boys down on Wall Street that are losing their homes and their jobs.

It is millions of ordinary Americans that are losing their homes and their jobs.

And things keep getting worse.

According to RealtyTrac, foreclosure filings were reported on 367,056 properties in the month of March.  This was an increase of almost 19 percent from February, and it was the highest monthly total since RealtyTrac began issuing its report in January 2005.

Not only that, but RealtyTrac projects that there will be a total of 4.5 million home foreclosures by the end 2010.  If you figure that there are approximately 4 people per household, that is another 18 million people that will be facing the pain of a foreclosure filing.

For many Americans, losing their home to foreclosure is just too much.  For example, one man in Ohio actually decided to bulldoze his own home rather than let the bank take it in foreclosure proceedings.

Because of the extreme economic conditions, millions of Americans are in severe pain and are becoming increasingly desperate.  In some of the most depressed areas, crime is absolutely spiraling out of control.  So far this year in Detroit, car thefts are up 83%, robberies are up 50%, burglaries are up 20% and property destruction is up 42%.

Adding to all of this economic despair is the fact that food and gas prices are starting to shoot up.

In some areas of the United States, people are already paying as much as $3.50 for a gallon of gasoline, and many experts are now predicting that gasoline could hit $4.00 a gallon by the end of 2010.

Not only that, but wholesale food prices rose 2.4% in March, matching the biggest gain in 26 years.

So while the economic recovery is buzzing along quite well down on Wall Street, the reality is that for millions of other Americans things are really hard.  In fact, not even the smaller banks are experiencing much of a recovery.  The FDIC’s list of problem banks just hit a 17-year high.

No, the main beneficiaries of this “economic recovery” are the boys over on Wall Street.  They should enjoy it while it lasts, because even harder economic times are on the way, and the reality is that none of us will be able to completely escape the economic pain that is coming.

Today financial power is being concentrated in the hands of fewer and fewer individuals.  In fact, the six biggest banks in the United States now possess assets equivalent to 60 percent of America’s gross national product.  Back in the 1990s that figure was less than 20 percent.  These six banks – Goldman Sachs, Morgan Stanley, JPMorgan Chase, Citigroup, Bank of America, and Wells Fargo – literally dictate what goes on in the U.S. banking industry.  These entities are the poster children for “too big to fail”, and they donate massive amounts of cash to the campaigns of both Republicans and Democrats to ensure that they will continue to receive favorable treatment.  The vast majority of Americans have had a banking account, a credit card and/or a mortgage with one of these institutions at some point.  If they acted in concert, these six banks could literally bring down the U.S. economy overnight if they wanted to.  Together with the Federal Reserve, these six banks represent the real financial power in America.  They are the 800 pound gorilla in the room that influences nearly every major financial deal that gets done and virtually every major political decision that gets made.  As the last couple of years have demonstrated, top politicians from both parties (John McCain and Barack Obama for example) will instantly jump into action and start advocating that the U.S. government spend billions upon billions of dollars when the interests of these behemoths are threatened.  The frightening thing is that the power of these megabanks is growing at a frightening pace.  As dozens upon dozens of smaller U.S. banks are “allowed to fail”, they either go out of existence or the Feds actually encourage these smaller banks to sell themselves to one of the big sharks.  In either event, the banking power in the United States becomes further consolidated in the hands of the megabanks.   More…