Who will bail out the countries that bailed out the world’s corporations?

disaster has simply shifted to governments. Now it’s threatening countries around the globe — and, if left unchecked, could rip the very fabric of Europe’s economic system and wreck economic recoveries in the U.S., China and Latin America.

The impact on markets has been severe. The euro has slumped more than 12% against the dollar since the sovereign-debt crisis flared in southern Europe. Gold has marched to new highs as investors seek a safe haven and, perhaps most alarming, it is now more expensive to buy insurance against national default than it is to insure against corporate failure.

“The sovereign-debt crisis spun out of control in the past week, and we see no easy way to resolve it,” said Madeline Schnapp, director of macroeconomic research at TrimTabs Investment Research.

Some investors and analysts are increasingly concerned that governments may be no more capable of repaying their debts than the banks and insurance companies they saved. And, they warn, if a major country comes close to default, it could trigger a financial meltdown that would eclipse the panic that followed the bankruptcy of Lehman Brothers in 2008.

The world has seen sovereign debt crises before. Latin America, Africa and Asia have all experienced upheavals sparked by excessive debt. These crises were all accompanied by stunted economic growth, inflation and weak stock market returns, which make it even harder to pay off debts. As investors and government officials ponder the current state of affairs, they see ominous signs that the developed world may be facing a similarly bleak future.

“The problem of the western world is that we have too much debt,” said Daniel Arbess, who manages the Xerion investment strategy at Perella Weinberg Partners. “Rather than reducing our debt, we’ve been moving it from one balance sheet to another.”

“All we’re doing is shifting chairs on the deck of the Titanic,” he added.

Some governments have started to respond to market pressure, with the U.K. pledging billions of pounds in spending cuts this week. Spain and Portugal also unveiled austerity measures. But the problem is so big that investors remain wary. Check out Portugal’s plans.

Stock markets plunged and credit markets shuddered last week on concern Greece and other indebted European countries like Portugal and Spain might default. See the story on market impact.

“What’s happened on a corporate level is now happening on a national level. The first nation to experience this is Greece, but other nations will, too,” Schnapp said.

To stop Greece’s debt troubles turning into a run on the euro and a global stock market rout, the European Union unveiled an unprecedented package of almost $1 trillion in emergency loans, stabilization funds and International Monetary Fund support on Sunday.

In the days that followed, the European Central Bank bought the government debt of Greece and other countries on the periphery of the region’s single-currency zone, such as Portugal, Spain, Italy and Ireland, investors said. Such a drastic step has been shunned by the ECB until now. Read about the market response on Monday.

“Temporarily the crisis in terms of liquidity has been averted, but the underlying problem hasn’t gone away,” Schnapp added. “Giant debt and expenditures by governments are still there.”

TrimTabs cut its recommendation on U.S. equities to neutral from fully bullish on Sunday, in the wake of the European bailout. 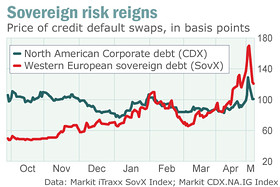 The sovereign crisis has been brewing for months.

For much of the financial crisis, investors worried about financial institutions defaulting, rather than sovereign nations. But that pattern has been upended.

In early February, the cost of insuring against a sovereign default in Western Europe exceeded the price of similar protection against default by North American investment-grade companies. That was the first time this had happened, according to data compiled by Markit from the credit derivatives market.