|Saturday, September 19, 2020
You are here: Home » War » The Syria Proxy War against the Islamic State Has Reached its Climax
​

Washington’s strategy consists in spearheading a broader regional war by inciting Turkey, Saudi Arabia as well as Israel to do the “dirty work for us”.

Until recently, Syrian Government Forces together with their allies (Russia, Iran, Hezbollah) have been confronting so-called “opposition rebels” largely composed of “moderate” terrorists and mercenaries, with US-NATO intelligence and special forces forces operating covertly within their ranks.

The Al Qaeda affiliated terrorists and the Islamic State (ISIS) forces are supported by US-NATO-Israel and their Persian Gulf GCC allies. Turkey and Saudi Arabia, in close liaison with Washington have played a central role in the recruitment, training and financing of the terrorists.

Sofar, this proxy war has unfolded without a direct confrontation between US-NATO allied forces and Syrian government forces, which are supported militarily by Russia and Iran.

A major transition is now occurring in the conduct of the war on Syria. The terrorists are being defeated by Syrian government forces with the support of Russia. The proxy war (under the formal banner of the “war on terrorism”) has reached its climax.

New Phase: The Role of Turkey and Saudi Arabia

In turn, Saudi Arabia, which is a State sponsor of terrorism has announced that it will be dispatching troops to Syria, allegedly with a view to combating the ISIS terrorists, which just so happen to be supported by Saudi Arabia.

“will fight with its U.S.-led coalition allies to defeat ISIS militants in Syria, however, he said Washington is more suitable to answer questions on further details about any future ground operations.” Al Arabyia

What is the significance of this statement?

The proxy war against ISIS is over?

A new proxy war with Turkey and Saudi Arabia directly involved in ground operations is unfolding with US-NATO pulling the strings in the background. Riyadh has confirmed that a joint Turkish-Saudi military coordination body has also been set up.

Saudi Arabia is now planning to invade Syria on the orders of Washington:

“The kingdom is ready to participate in any ground operations that the coalition (against Islamic State) may agree to carry out in Syria,” …

Asseri said Saudi Arabia had been an active member of the U.S.-led coalition that had been fighting Islamic State in Syria since 2014, and had carried out more than 190 aerial missions.

“If there was a consensus from the leadership of the coalition, the kingdom is willing to participate in these efforts because we believe that aerial operations are not the ideal solution and there must be a twin mix of aerial and ground operations,” Asseri said. (Reuters, February 4, 2016)

The shift would be from air to ground operations implying the deployment of Saudi troops inside Syria.

“Talking Peace”, Planning the Next Phase of the War on Syria

In recent developments, Saudi Arabia’s Deputy Crown Prince and Defense Minister Mohammed bin Salman was in Brussels at NATO headquarters “to discuss the Syrian civil war”. This meeting was an initiative of the Pentagon rather than NATO. It was intended to plan the next phase of  the war on Syria.

Meanwhile in Munich, John Kerry and Sergei Lavrov were discussing the implementation of a nationwide “cessation of hostilities” in Syria. 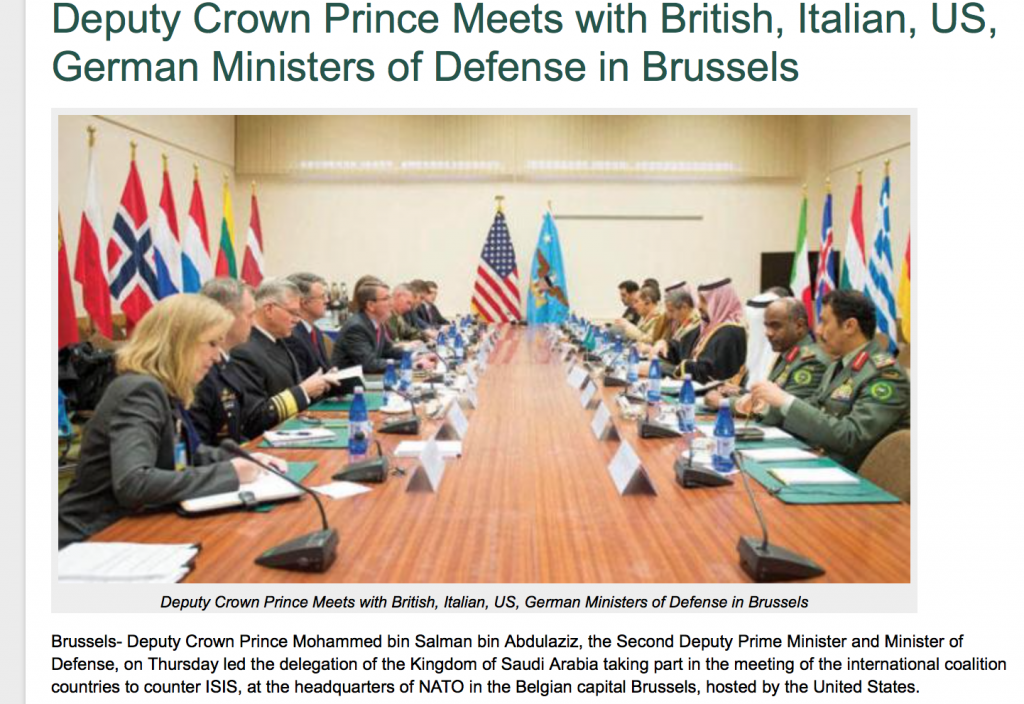 Under the Pentagon’s diabolical scenario, confrontation on the ground in the war theater will be between Saudi Arabia and Syria government forces, which are respectively supported by US-NATO and Russia-Iran.

Reports confirm that the US-NATO sponsored terrorists supported by Saudi Arabia, Qatar, Turkey, et al have in large part been defeated. Are they be replaced by conventional Saudi, Turkish forces, coupled with more US-NATO special forces which are already on the ground inside Syria?

Under this evolving scenario, there is also the danger that Turkey and Saudi Arabia forces acting on behalf of US-NATO could be involved in military confrontations with both Russia and Iran, opening up a dangerous pandora’s box, a door towards military escalation.

Saudi Arabia Brig. Gen. Ahmed Al-Assiri also sent a veiled threat to Iran  ”saying that if Tehran is serious in fighting ISIS, then it must stop supporting “terrorism” in Syria or Yemen”. (Al Arabyia)

Washington’s strategy in this regard consists in spearheading a broader regional war by inciting Turkey, Saudi Arabia as well as Israel to do the “dirty work for us”.

This US sponsored war is ultimately directed against Russia and Iran.