The highly controversial and potentially lethal anthrax vaccine may be tested on US children if the federal government gets its way. Although adverse event reports related to the vaccine among adult test subjects have included hospitalization, disability and even death, the U.S. Department of Health and Human Services (DHHS) is exploring the possibility of testing the vaccine on children. 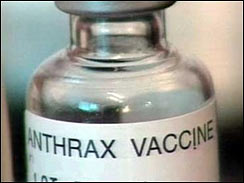 Nicole Lurie, the assistant secretary for preparedness and response at the DHHS, recently requested that the National Biodefense Science Board submit an evaluation of safety issues related to testing the anthrax vaccine on children. The DHHS frames the possible testing as an issue of biodefense preparedness. However, the possibility of pediatric testing of the vaccine both ignores the vaccine’s dangers, and raises the specter of class- and/or race-based selection of medical test subjects which has haunted US health agencies for over a century.

Even in the months in 2001 when letters containing anthrax were mailed to several congressional leaders, heightening national fears during the post-9/11 period, Bill First, a physician and then-Senate Majority Leader, urged caution in use of the anthrax vaccine. He told CNN: “There are very real and potentially serious side effects from the vaccine and anyone who elects to receive the vaccine needs to be made aware of that. I do not recommend widespread inoculation. There are too many side effects and if there is limited chance of exposure- the side effects would far outweigh any potential advantage.”

A 2007 report by the CDC, along with the Vaccine Healthcare Centers of the Department of Defense and the watchdog group Government Accountability estimated that “between 1 and 2 percent” of vaccinated military personnel, experienced “severe adverse events, which could result in disability or death.”

If a vaccine with this kind of reputation is to be tested on children, one has to wonder which children. It is fairly certain those young test subjects won’t be the offspring of high-ranking government officials or corporate vice presidents and CEOs.

The history of medical testing carries a taint of racism, classism and opportunism, as health officials select those with less education and fewer choices to be unwitting guinea pigs in medical experiments supposedly in the name of scientific advancement.

You don’t have to be a conspiracy theorist or history professor to have heard of the notorious 40-year long Tuskegee experiments in which the US Public Health Service withheld syphilis treatment from infected black men to measure the effects of the disease.

In October of 2010, President Obama apologized to Guatemala for tests during the 1940s when the US Public Health Service used prostitutes deliberately infect 700 prisoners, soldiers and patients with emotional and mental problems with syphilis both through visits with prostitutes and pouring bacteria for the disease onto skin abrasions on the subjects’ bodies.

Vaccine testing has its own special place in the annals of this kind of integrity-free medical research. In the early 1960s, mentally disabled children at a residential state school in New York were deliberately infected with viral hepatitis so that they could be test subjects for the disease.

A 1978 CDC test for a hepatitis B vaccine which sought “promiscuous homosexual male” volunteers has some interesting connections to both HIV and the previously rare opportunistic diseases associated with the AIDS virus. As recently as 1990, the CDC and Kaiser Pharmaceuticals gave 1,500 black and Hispanic 6-month old infants an unlicensed measles vaccine without the approval and consent of their parents. (For more detail of these stories and other true-life medical experimentation horror stories, see http://www.naturalnews.com/022383.html).