US Ramps Up Global War Agenda

Like a schoolyard bully, President Barack Obama is flexing American military muscle as he currently sweeps through the Asia-Pacific region. The nominal impetus for the tour was the Asia Pacific Economic Cooperation (APEC) summit held in Hawaii last week. But rather than discussing “economics” (the E in APEC), the salient focus for Obama and his entourage appears to be “war” – and in particular laying down battle lines to China. 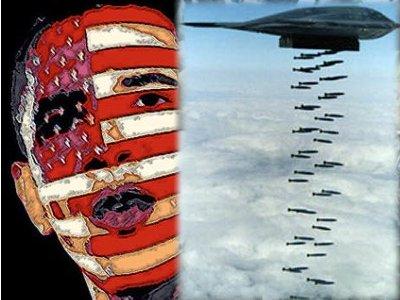 Testy relations with China is nothing new for Washington given recent months of US haranguing over trade and finance, but what Obama’s bombast signals is a sinister ramping up of the militarist agenda towards Beijing.

As if bouncing underlings and lackeys into his gang, the American president has moved on from Honolulu with stopovers in Australia, Indonesia and elsewhere. Given the primary economic power of China in the hemisphere, it might be thought appropriate for Obama to make a cordial visit to Beijing to discuss partnerships and policies to revive the global economy. But no. The omission of China on this major US tour seems to be a deliberate snub to Beijing and a message to the region: that China is to be isolated and ringfenced. This is the stuff of warmongering writ large.

The blatant aggression is naturally smoothed over and made palatable by the Western mainstream media. Reporting on Obama’s unilateral belligerence at the APEC, the Washington Post bemoans: “Try as he might to focus Asian and Pacific leaders on forging new economic partnerships during a regional summit here, President Obama has spent much of his time in private meetings with his counterparts discussing another pressing concern: national security [that is, US military power].”

The Financial Times reports breathlessly: “Barack Obama will not set foot in China during his swing through the Asia-Pacific region… yet the country’s rapid economic ascent and military advances will provide the backdrop for almost everything he does on the trip.”

Note the assertion that it is China’s “military advances” that are prompting US concerns, not the more reasonable and realistic observation that Washington is the one beating the war drums.

The FT goes on to say: “The Pentagon is quietly working on a new strategy dubbed the AirSea Battle concept, which is designed to find ways to counter Chinese military plans to deny access to US forces in the seas surrounding China.”

In “seas surrounding China” it may be thought by some as entirely acceptable for Beijing to “deny access to US forces”. But not, it seems, for the scribes at the FT and other Western mainstream media, who transform US offence/Chinese defence into Chinese offence/US defence. One can only imagine how that same media would report it if China announced that it was intending to patrol nuclear warships off California.

As previously noted by Michel Chossudovsky at Global Research, the South China Sea’s untapped reserves of oil and other minerals are a major driver in US maneouvring. China stands to have natural territorial rights to these deposits and has much more valid claim to the wealth than the US, whose counter-claims on the matter seem at best arrogant and at worst provocative. Again, one can imagine the US and mainstream media reaction if China was eyeing oil and gas fields off Alaska.

But there is a bigger geopolitical agenda here, as Global Research has consistently analysed. The increasing US militarism in Asia-Pacific is apiece with the globalization of war by the US/NATO and its allies. The shift in policy is, as the Washington Post lamely tells us, “the US reasserting itself as a leader in the Asia-Pacific after years of focusing on [illegal] wars in the Middle East.”

However, this is not a dynamic that should be viewed as somehow normal and acceptable. This is, as we have stated, an escalation of global aggression by powers that are “addicted to war” as a matter of policy.

Top of the US hit list is China. Washington’s criminal wars in Iraq and Libya have in particular been aimed at cutting China out of legitimate energy investments in the Middle and East and North Africa (and Africa generally). That in itself must be seen by Beijing as a flagrant assault on its overseas’ assets. Not content, it seems, with achieving that dispossession of vital Chinese energy interests, Washington is now pushing its insatiable appetite all the way into China’s domain. But such unprecedented aggression is made to appear by the US government and the dutiful mainstream media as a natural entitlement where refusal by the other party is perversely presented as “military plans to deny access”.

Obama’s visit to Australia this week is undoubtedly aimed at further twisting the threat to China. In Darwin, the US president is overseeing the opening of a base that will see for the first time US Marines being able to conduct war games on Australian soil. Thousands of kilometers from China, this development may at first seem inconsequential. But then we are told that the move is designed to station US military “out of the reach of Chinese ballistic missiles”. The insinuation is unmistakable and menacing: China is an imminent threat. Somehow, without issuing any such aggressive moves, Beijing is suddenly made to look as if it is prepared to launch ballistic missiles at US installations.

It is tempting to call this US-led dynamic of global war “dysfunctional”. But, disturbingly, it is not merely dysfunctional. The global war dynamic is a function of the collapse of capitalism and democracy in the US and Europe (the brutal police crackdown on Occupy protesters across the US is evidence of the latter). War on the world is the logical outcome of this failed system, as history has already shown us with the horrors of World War One and Two.

Karl Marx once noted: “History repeats itself, first as tragedy, then as farce”. To avert another “farce” in which the horrors of history are repeated, we need to once and for all challenge the root cause: capitalism.