Volcanic Ash Threat in Europe was All a ‘Mistake’, Authorities Say

Once again computer models did the trick for scientists 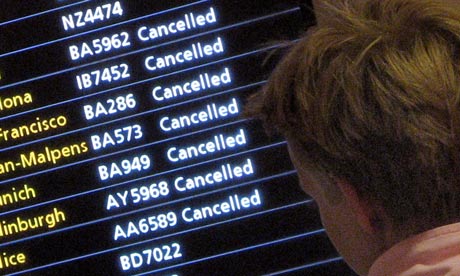 It was not a volcano or its ash what caused major disruptions in air travel for the past several days, but a bunch of flawed computer models scientists used to forecast how the volcanic eruption would affect air travel throughout the European continent. As reported yesterday, other reasons are being looked at to explain why flights were suspended if the famous ash cloud did not reach Europe in the way it was originally described. Today, authorities are blaming defective computer models and not the volcanic eruption.

According to Matthias Ruete, director general for mobility and transport in Europe, the computer models used to make a decision on whether or not the air space would remain open, were flawed due to the fact scientists used incomplete science and limited data. The closure of air space, which caused great disruption in passenger and cargo transport from and to the old continent, stranding thousands of people and amounting to loses of hundreds of millions of dollars per day, does not come as a surprise. Scientists who claim that man causes global warming, also based their calculations and forecasts on flawed, incomplete and dubious data. This was discovered when e-mails and documents from the University of East Anglia were let out on the web.

“It is a black box in certain areas,” Matthias Ruete, said, asserting that the assumptions used in the models were not based on scientific evidence. Apparently, authorities in Europe were not sure about certain issues and questions involving the amount of ash at specific heights and places, how hazardous it would be and the rate at which the ash would fall from the sky. “It’s one of the elements where, as far as I know, we’re not quite clear about it,” he revealed.

As reported yesterday, some airlines even conducted test flights in order to determine whether their planes would be able to withstand the effects of the now confirmed fictitious ash. Companies like KLM, Air France and Lufthansa sent planes up and all indications pointed out that the risk was minimum or none.

It appears that scientists and authorities decided to close air space, and in the process cause grave stress to an economic system that is already shaky. The current levels of outstanding debt many of the companies that revolve around commerce and air travel as well as that of European and other governments provides very little margin of error for this kind of mistakes, however those who oversee air safety did not take that into account when making up their minds about what to do with transatlantic flights.

This computer model errors along with poor judgment still do not explain why if there was any kind of threat to air travel, military planes from European countries and the U.S. maintained and still continue to execute exercises that are part of the Brilliant Ardent 10 program. The admittance of wrongdoing does not explain if and how the Coronal Mass Ejections (CME’s) may have influenced on weather patterns, plate tectonics or volcanic activity. We tried to obtain information from Dr. David H. Hathaway, a NASA scientist and expert in CME, but he has not returned our e-mail. “If you take the situation across the Atlantic, there the advice would probably be: don’t fly over the volcano. Otherwise, it is up to you to take the precautions necessary,” Mr Ruete said. Many people are now calling for the adoption of standards used in the United States, where it is up to the airlines to decide whether it is safe to fly or not. European standards establish that member states have the prerogative to make those decisions, but all decisions made for the past week have been made by computer models, it seems.  Unfortunately, computers cannot be fired.