Who is Behind Mexico’s Drug War?

On Friday, two patrol cars were ambushed by armed gunman in downtown Ciudad Juarez. In the ensuing firefight, seven policemen 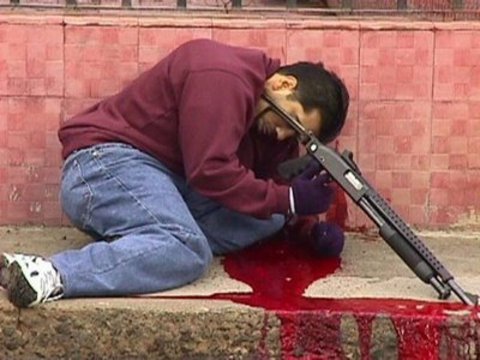 were killed as well as a 17-year old boy who was caught in the crossfire. All of the assailants escaped uninjured fleeing the crime-scene in three SUVs. The bold attack was executed in broad daylight in one of the busiest areas of the city. According to the Associated Press:

“Hours after the attack, a painted message directed to top federal police commanders and claiming responsibility for the attack appeared on a wall in downtown Ciudad Juarez. It was apparently signed by La Linea gang, the enforcement arm of the Juarez drug cartel. The Juarez cartel has been locked in a bloody turf battle with the Sinaloa cartel, led by Joaquin “El Chapo” Guzman.

“This will happen to you … for being with El Chapo Guzman and to all the dirtbags who support him. Sincerely, La Linea,” the message read.” (“7 Mexican police officers killed in Ciudad Juarez”, Olivia Torres, AP)

The massacre in downtown Juarez is just the latest incident in Mexico’s bloody drug war. Between 5 to 6 more people will be killed on Saturday, and on every day thereafter with no end in sight. It’s a war that cannot be won, but that hasn’t stopped the Mexican government from sticking to its basic game-plan.

The experts and politicians disagree about the origins of the violence in Juarez, but no one disputes that 23,000 people have been killed since 2006 in a largely futile military operation initiated by Mexican president Felipe Calderon. Whether the killing is the result of the ongoing turf-war between the rival drug cartels or not, is irrelevant. The present policy is failing and needs to be changed. The militarization of the war on drugs has been a colossal disaster which has accelerated the pace of social disintegration. Mexico is quickly becoming a failed state, and Washington’s deeply-flawed Merida Initiative, which provides $1.4 billion in aid to the Calderon administration to intensify military operations, is largely to blame.

The surge in narcotics trafficking and drug addiction go hand-in-hand with destructive free trade policies which have fueled their growth. NAFTA, in particular, has triggered a massive migration of people who have been pushed off the land because they couldn’t compete with heavily-subsidized agricultural products from the US. Many of these people drifted north to towns like Juarez which became a manufacturing hub in the 1990s. But Juarez’s fortunes took a turn for the worse a few years later when competition from the Far East grew fiercer. Now most of the plants and factories have been boarded up and the work has been outsourced to China where subsistence wages are the norm. Naturally, young men have turned to the cartels as the only visible means of employment and upward mobility. That means that free trade has not only had a ruinous effect on the economy, but has also created an inexhaustible pool of recruits for the drug trade.

Washington’s Merida Initiative–which provides $1.4 billion in aid to the Calderon administration to intensify military operations–has only made matters worse. The public’s demand for jobs, security and social programs, has been answered with check-points, crackdowns and state repression. The response from Washington hasn’t been much better. Obama hasn’t veered from the policies of the prior administration. He is as committed to a military solution as his predecessor, George W. Bush.

But the need for change is urgent. Mexico is unraveling and, as the oil wells run dry, the prospect of a failed state run by drug kingpins and paramilitaries on US’s southern border becomes more and more probable. The drug war is merely a symptom of deeper social problems; widespread political corruption, grinding poverty, soaring unemployment, and the erosion of confidence in public institutions. But these issues are brushed aside, so the government can pursue its one-size-fits-all military strategy without second-guessing or remorse. Meanwhile, the country continues to fall apart.
THE CLASHING CARTELS

The big cartels are engaged in a ferocious battle for the drug corridors around Juarez. The Sinaloa, Gulf and La Familia cartels have formed an alliance against the upstart Los Zetas gang. Critics allege that the Calderon administration has close ties with the Sinaloa cartel and refuses to arrest its members. Here’s an excerpt from an Al Jazeera video which points to collusion between Sinaloa and the government.

“The US Treasury identifies at least 20 front companies that are laundering drug money for the Sinaloa cartel…There are allegations that the Mexican government is “favoring” the cartel. According to Diego Enrique Osorno, investigative journalist and author of the “The Sinaloa Cartel”:
“There are no important detentions of Sinaloa cartel members. But the government is hunting down adversary groups, new players in the world of drug trafficking.”
International Security Expert, Edgardo Buscaglia, says that “of over 50,000 drug related arrests, only a very small percentage have been Sinaloa cartel members, and no cartel leaders. Dating back to 2003, law enforcement data shows objectively that the government has been hitting the weakest organized crime groups in Mexico, but they have not been hitting the main crime group, the Sinaloa Federation, that’s responsible for 45% of the drug trade in this country.” (Al Jazeera)

There’s no way to verify whether the Calderon administration is in bed with the Sinaloa cartel, but Al Jazeera’s report is pretty damning. A similar report appeared in the Los Angeles Times which revealed that the government had diverted funds that were earmarked for struggling farmers (who’d been hurt by NAFTA) “to the families of notorious drug traffickers and several senior government officials, including the agriculture minister.” Here’s an excerpt from the Los Angeles Times:
“According to several academic studies, as much as 80% of the money went to just 20% of the registered farmers…Among the most eyebrow-raising recipients were three siblings of billionaire drug lord Joaquin “El Chapo” Guzman, head of the powerful Sinaloa cartel, and the brother of Guzman’s onetime partner, Arturo Beltran Leyva”. (“Mexico farm subsidies are going astray”, Tracy Wilkinson, Los Angeles Times)

There’s no doubt that if the LA Times knows about the circular flow of state money to drug traffickers, than the Obama administration knows too. So why does the administration persist with the same policy and continue to support the people they pretend to be fighting?

In forty years, US drug policy has never changed. The same “hunt them down, bust them, and lock them up” philosophy continues to this day. That’s why many critics believe that the drug war is really about control, not eradication. It’s a matter of who’s in line to rake in the profits; small-time pushers who run their own operations or politically-connected kingfish who have agents in the banks, the intelligence agencies, the military and the government. Currently, in Juarez, the small fries’ are getting wiped out while the big-players are getting stronger. In a year or so, the Sinaloa cartel will control the streets, the drug corridors, and the border. The violence will die down and the government will proclaim “victory”, but the flow of drugs into the US will increase while the situation for ordinary Mexicans will continue to deteriorate.

Here’s a clip from an article in the Independent by veteran journalist Hugh O’Shaughnessy:

“The outlawing and criminalizing of drugs and consequent surge in prices has produced a bonanza for producers everywhere, from Kabul to Bogota, but, at the Mexican border, where an estimated $39,000m in narcotics enter the rich US market every year, a veritable tsunami of cash has been created. The narcotraficantes, or drug dealers, can buy the murder of many, and the loyalty of nearly everyone. They can acquire whatever weapons they need from the free market in firearms north of the border and bring them into Mexico with appropriate payment to any official who holds his hand out.” (“The US-Mexico border: where the drugs war has soaked the ground blood red”, Hugh O’Shaughnessy The Independent)

It’s no coincidence that Kabul and Bogota are the the de facto capitals of the drug universe. US political support is strong in both places, as is the involvement of US intelligence agencies. But does that suggest that the CIA is at work in Mexico, too? Or, to put it differently: Why is the US supporting a client that appears to be allied to the most powerful drug cartel in Mexico? That’s the question.   More…