Will the United States Regain their Freedom?

Donald Trump refused to don the Presidential uniform of his predecessors, and dedicated his speech of investiture to mocking the System and announcing a change of paradigm. He has built his Security team around two themes – the eradication of Daesh and the opposition to 11 September – two characteristics which are aimed at putting an end to the process of globalisation.

President Donald Trump was invested on 20 January 2017. Although he had just sworn his oath, and therefore had not had the time to do anything either for good or for evil, on the very next day, Hillary Clinton’s sponsors organised a gigantic demonstration against him in Washington.

As proof that what is at stake here does not concern only the United States, identical demonstrations were staged in numerous countries, particularly in the United Kingdom. Of course, the demonstrators were not reacting to any particular act, but simply expressing their fears. Outside the US, many of them carried signs reading – «I’m terrified».

Donald Trump, whose adversaries portray him as an unpredictable character without any clear guide-line, has been indicating for a long time what he intends to do. He first of all demonstrated, then explained, first by allusion and then quite clearly – he intends to give back to the American People the Power that was confiscated on 11 September 2001 [1].

Even before he took his place in the electoral campaign, Donald Trump had attempted to open the file on this usurped Power by sponsoring the movement for the truth about the birth of President Barack Obama [2]. He showed, basing his argument on the testimony of the President’s grandmother, then on the absence of registration in the Hawaï records, then again on the irregularities in the official certificate, that Obama was born a subject of the British Crown in Kenya.

And yet, during the electoral campaign, once he had realised that he had a chance of winning, he closed the file and abstained from any provocation against the President. He stopped making any allusion to the diarchy of Power. However, he did concentrate his message on the usurpation of real Power by a small exclusive group for whom Hillary Clinton is the visible spokeswoman.

His positions, which make no sense at all in terms of the traditional political differences, whether concerning foreign policy – is he an interventionist or an isolationist? – or the economy – is he a free-trader or a protectionist? – are on the contrary perfectly clear to those who are suffering from the usurpation of Power [3].

He has never stopped repeating, clearly enough so that he is supported by his compatriots, but allusively enough to avoid head-on conflict, that all the decisions taken since 9/11 are illegitimate. This has nothing to do with the antagonism between Republicans and Democrats, since these decisions were approved by the Republican Bush Jr. and the Democrat Obama. On the contrary, it has to do with an ancient cleavage in civilisation between the caste who closed their eyes to 9/11, and those who were crushed by it, between the adepts of Mayflower Puritanism and the adepts of Freedom [4].

Contrary to his predecessors, he wrote his speech of investiture himself, and centred it around this – «Today’s ceremony has a very particular meaning, because it is not simply the transfer of power from one administration to another. (…) What really matters is not who has the power in government, but the fact that the government is in the hands of the American People» [5]. 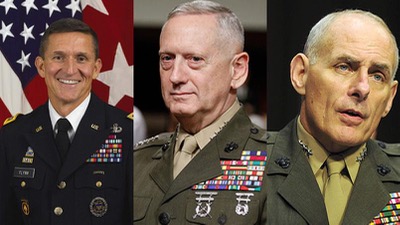 As from the first day, and contrary to US tradition, he set up a National Security team composed of notable soldiers – Generals James Mattis, John Kelly and Michaël Flynn. Despite the fact that the Press presents them as an incoherent grab-bag of personalities chosen independently of one another, he has in truth chosen them to take back the Power confiscated by a faction of the military-industrial complex.

The new Secretary of Defense, General James Mattis, was confirmed by the Senate and has been sworn in. He is considered by his peers as a learned man and one of the best strategists of his generation. During the electoral campaign, he had been asked to present himself, in the name of the Republican party, to run against Trump. He hesitated for a moment, having discovered the dark side of politics in Washington, then retired from the competition without explanation [6]. His return was warmly welcomed by the army, particularly since two thirds of the military had voted for Donald Trump. Over the last two years, Mattis was a researcher at the Hoover Institution (a Republican think-tank based at Stanford University). He pursued his studies on the relations between civilians and the military, which attests to his will to place the armed forces back in service of the People.

When he arrived at the Pentagon, Mattis distributed a short Memorandum in which he affirmed that «the military and the Intelligence agencies are the sentinels and guardians of the Nation» – a phrase which is aimed at soothing the conflict concerning Russia which opposes Trump and the outgoing director of the CIA, John O. Brennan – and at re-orienting the work of the security forces towards the defence of the Nation, rather than the pursuit of an imperial fantasy or the protection of the interests of multinational companies [7].

Since the director of the CIA, Mike Pompeo, is still waiting for his confirmation by Congress, President Trump went to the CIA himself. While they talked of one thing and another, he clearly set the course – «to eradicate Islamic terrorism from the surface of the Earth» [8]. He seems to be aware of the debates that have shaken the Agency over the last four years about the folly of supporting Daesh – debates which earned his National Security advisor, General Michaël Flynn, his post as director of Military Intelligence. Trump made no mention of the controversy about alleged Russian interference in the US electoral campaign, and even less about the rôle of «Russian agents» that the Press had attributed to his ex-campaign director, Paul Manafort, and two other of his advisors, Carter Page and Roger Stone.

In the absence of Pompeo, the President did not touch on the question of the structural reform of the CIA. General Mattis’s Memorandum, the presence of General Flynn by Trump’s side, and the way in which he had praised Pompeo – a brilliant student of the military academy of West Point – give the impression that this new team intends to place the CIA in the orbit of the Pentagon rather than that of the Secretary of State – an option which is aimed at reducing the possibilities for intervention by Hillary Clinton, still influential in her ex- Secretariat.

Donald Trump has asked about fifty members of the Obama administration to remain at their posts. Among them –

Adam Szubin, under-Secretary of the Treasury tasked with fighting the financing of terrorism;

Dab Kern, special Chief of Staff for the White House.

It therefore seems that the White House wants to dispose of a team with the means of fighting Daesh.

The inter-service Chief of Staff, General Joe Dunford, has announced that he is ready to present to President Trump various options for attacking Daesh. One of them consists of taking al-Raqqah with 23,000 Arab mercenaries who have already been trained by the Pentagon. Dunford was in Paris on 16 January, where he presided a meeting of the Coalition Chiefs of Staff.

Whatever Donald Trump decides, he will have to take into account the fact that the Caliphate has been heavily armed by the Obama administration. Besides this, Daesh disposes of an experience in combat which the Pentagon’s new mercenaries do not have. Also, before attacking al-Raqqah, he will have to decide which future he wants to favour in Iraq and in Syria.

President Trump has named his National Security Advisor, General John Kelly, who has been confirmed by the Senate and has assumed his functions. According to the US Press – usually an untrustworthy source of information, to be taken with great precaution – this ex-CEO of SouthCom was chosen for his knowledge of the Mexican border and the stakes involved. Maybe.

However, there may be another reason for this choice – Kelly was Mattis’s assistant in Iraq. In 2003, both of them entered into conflict with Paul Bremer III, the boss of the Coalition Provisional Authority – which, contrary to what the title might suggest, did not depend on the Coalition, but on the men who organised 9/11 [9]. They also opposed the civil war that John Negroponte had decided to organise in order to head the Iraqi Resistance away from fighting the Occupier, by creating the Islamic Emirate in Iraq (future Daesh). On the contrary, Mattis & Kelly attempted to honour the heads of the tribes of central Iraq in order to no longer be perceived as occupiers. They sought the help of the head of US Military Intelligence in Iraq, Michaël Flynn. The three men finally submitted to the orders of the White House.

General Michael Flynn was nominated as Donald Trump’s National Security Advisor. Since this post had not been approved by the Senate, he immediately assumed his functions. We have already presented this man as the defender of the United States as a Nation, and as such, as the principal opponent of the use of Islamic terrorism by the CIA [10].

Seeking any way they could of diminishing his authority, Hillary Clinton and her campaign director John Podesta started a rumour that he or his son, Michaël Flynn Jr., were unable to keep their mouths shut, and had helped us write an article on the reform of Intelligence [11]. In case this charge would not be enough, they used one of Michaël Jr’s Tweets, which linked to one of our articles, to accuse the two men of «conspirationism» – in other words, seeking the truth about the events of 9/11 [12].

Contrary to what the US Press pretends, Generals Flynn, Mattis & Kelly have known each other for a long time, and serve the same objective – which does not mean that relations between them are always easy. Only senior officers of this status are capable of helping President Donald Trump to take back the Power that has been usurped since 11 September 2001. In order to succeed, they will have to clean out the Pentagon, CIA and the international institutions which have been corrupted – NATO, the European Union and the UNO.

The millions of people who demonstrated against President Donald Trump were right to howl their fear. Not that the new inhabitant of the White House is a misogynist, a racist and a homophobe – which he is not – but because we are approaching a moment when the knots will be untied. It is more than probable that the usurped Power structure will not allow itself to be unravelled without reacting.

This confrontation will not take place in the Middle East this time, but in the West, and particularly in the United States.