Did US Intelligence have Prior Knowledge about Khashoggi’s Murder?

Who ordered the killing of Jamal Khashoggi? “The CIA and the White House are at odds over who’s responsible for what happened.”

According to media reports, Langley is pointing its finger at Crown Prince Mohammad bin Salman(MBS).

Prior to the official release of the CIA report, the Washington Post (16 November) reported that

“In reaching its conclusions, the CIA examined multiple sources of intelligence…  “The accepted position is that there is no way this happened without him [Crown Prince MBS] being aware or involved,” said a U.S. official familiar with the CIA’s conclusions. A spokesman for the CIA declined to comment”.

Follow the play of words in the above quotation. The “accepted position” by an unnamed “US official” has not been confirmed by the Agency.

Awareness by Crown Prince MBS does not necessarily imply that MBS had ordered the assassination.

The Khashoggi affair has the features of a carefully designed intelligence operative (with followup propaganda) rather than a “hit and kill” political assassination.

The way the killing was undertaken, its gruesome details were used to highlight the event which from one day to the next was plastered on UK-US news tabloids. And the relentless news coverage of this hideous event is still ongoing. 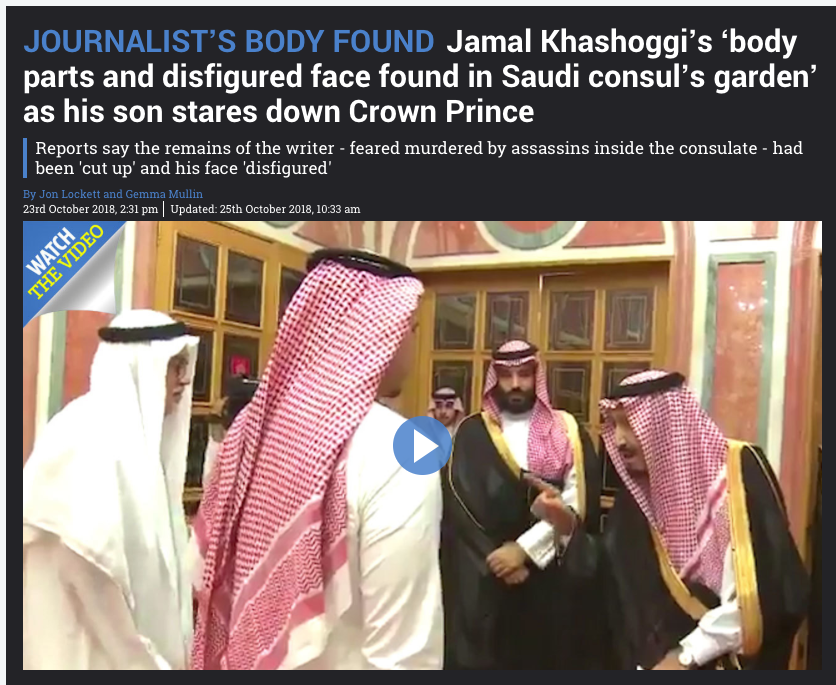 According to reports, the hit team had a lieutenant-colonel forensic pathologist together with two members of Saudi intelligence (GIP), members of the Saudi Air Forces and Army (see list in annex).

Why the need for such a large team of  assassins from the military Saudi intelligence apparatus together with several members of MBS’ security detail? (Were they dispatched on the orders of MBS? Their participation had an immediate impact on the media campaign against MBS).

The gruesome details of the operative at Saudi Arabia’s consulate in Istanbul were released by Turkish sources, triggering almost immediately an unusual gush of media propaganda. Far-reaching geopolitical implications. What is the ultimate objective of this unfolding propaganda campaign?

The way Khashoggi was killed by a military-intelligence team must have been carefully planned in Riyadh prior to the operatives’ arrival at the Saudi consulate in Istanbul? This is a matter to be carefully verified.

Was there foreknowledge? According to the WaPo report, Langley was aware of the assassination plot but US intelligence visibly did not act:

“The United States had also ­obtained intelligence before Khashoggi’s death that indicated he might be in danger. But it wasn’t until after he disappeared on Oct. 2 that U.S. intelligence agencies began searching archives of intercepted communications and discovered material indicating that the Saudi royal family had been seeking to lure Khashoggi back to Riyadh.

It should be understood that Saudi Arabia’s General Intelligence Presidency (GIP) and the CIA not only exchange classified information, Saudi intelligence has consistently acted as a de facto subsidiary of the CIA, going back to the onset of the Soviet-Afghan war in 1979. The CIA has its staff in Riyadh operating out of the US Embassy, as well as military-intelligence personnel on location collaborating with their counterparts at Saudi Arabia’s GIP.

According to the Washington Post, the US had prior intelligence that Khashoggi’s  life “might be in danger”, but at the same time they were unaware of “this intelligence in advance” of his killing. Sounds contradictory, read it carefully:

” Two U.S. officials said there has been no indication that [CIA] officials were aware of this intelligence in advance of Khashoggi’s disappearance or had missed any chance to warn him. (WaPo, November 16, 2018, emphasis added)

The names of several of alleged suspects were released by Turkish media on October 11:

Meshal Saad M Albostani, A lieutenant in the Saudi Air Forces, reported to have been killed in a mysterious road smash in Riyadh, Saudi Arabia.

Dr. Salah Muhammad A Tubaigy, a forensic pathologist, head of the Saudi Scientific Council of Forensics and lieutenant colonel of the Armed forces of Saudi Arabia, also working according to the BBC in the forensic science department of the interior ministry’s General Directorate of Public Security responsible for national security.

Members of the Saudi Military

Maher Abdulaziz M. Mutreb,  a member of the Saudi Army, with an intelligence background

Abdulaziz Muhammed M Alhawsawi,  member of the security detail who travels with the crown prince.

Saif Saad Q Alqahtani  works for the crown prince according to the WaPo.

Daily Sabah, MenoM3ay, WaPo, Turkish media and other sources. The information is unconfirmed.

The Saudi State prosecutor confirmed that 11 of the suspects “had been indicted over the death of the journalist Jamal Khashoggi and that he requested the death penalty for five of them.” (Business Insider). The official Saudi position is that the Crown Prince “had nothing to do with the killing”