|Monday, January 27, 2020
You are here: Home » Economy » Does Wall Street Finance the Battle against Neoliberalism?
​

Does Wall Street Finance the Battle against Neoliberalism?

It is a new historical maximum ... with an added problem. Yes, because one-third of this colossal sum will have to be reimbursed or refinanced by 2021.

Today, I read an interesting article referring to Mexico on how neoliberal economists through the application of “strong IMF economic medicine” contributed to “wreaking havoc” on the global poor while “protecting the financial elites”.

And then I arrived at the foot of the article published by Alternet:

“This article was produced by Globetrotter, a project of the Independent Media Institute”.

The Independent Media Center is described as an

“Internet-based, news and events bulletin board [which] represents an invariably leftist, anti-capitalist perspective and serves as a mouthpiece for anti-globalization/anti-America themes.”

Globetrotter is a project of the IMC which (according to the IMC):

“explores the struggles for independence, dignity and democracy in the developing world, from economic models to war and imperialism.”

Needless to say, I was puzzled. Does Wall Street finance the battle against neoliberalism?

A critique of the IMF macro-economic agenda for Latin America is funded by a foundation owned by one of Wall Street’s most prominent financiers.

While the author accuses the IMF mission to Mexico of window dressing, “[n]othing in the IMF staff statement indicated a policy that would tackle Mexico’s grave problems of poverty and inequality”.

One is however left with the impression that it’s all a big management failure which can be rectified by changing the IMF recipe and training IMF officials to learn the realities of developing countries:

Someone should encourage the IMF to stop sending staff teams into countries like Mexico. Each report is identical to the previous one. Nothing seems to be learned by these teams. Years ago, a senior IMF economist told me that when he arrived in a Central Asian country he knew nothing of that country, he got to see nothing of it when he was there and he knew virtually nothing when he drafted the Article IV review. All he did in the country was sit in one air-conditioned room after another, listen to canned reports from nervous finance ministry officials and then develop the report based on the IMF’s same old recipe—make cuts, target welfare, privatize and make sure that the banks are happy. (Alternet, emphasis added)

“Make sure the banks are happy”. Yes, that is the main goal. And the standard recipe serves their interests.

The IMF is controlled by Wall Street and the US Treasury. It has informal ties to the Pentagon. It routinely interfaces with the Washington think tanks. It is part of what is called the “Washington Consensus” which defines the gamut of deadly economic measures imposed on indebted developing countries.

Numerous organizations and protest movements (against neoliberalism) including the World Social Forum (WSF) are funded by Wall Street. How is the process of “manufactured dissent” achieved?

Co-optation is not limited to buying the favors of politicians. The economic elites –which control major foundations– also oversee the funding of numerous NGOs and civil society organizations, which historically have been involved in the protest movement against the established economic and social order. The programs of many NGOs and people’s movements rely heavily on funding from both public as well as private foundations including the Ford, Rockefeller, McCarthy foundations, among others.

The anti-globalization movement is opposed to Wall Street and the Texas oil giants controlled by Rockefeller, et al. Yet the foundations and charities of Rockefeller et al will generously fund progressive anti-capitalist networks as well as environmentalists (opposed to Big Oil) with a view to ultimately overseeing and shaping their various activities. (Michel Chossudovsky, Manufacturing Dissent, Global Research, 2015

There can be no meaningful mass movement when dissent is generously funded by those same corporate interests which are the target of the protest movement. In the words of McGeorge Bundy, president of the Ford Foundation (1966-1979),“Everything the [Ford] Foundation did could be regarded as ‘making the World safe for capitalism’”. (Ibid)

Will elite institutions attempt through various means to infiltrate the Green Vests? France’s intelligence and police apparatus has no doubt already contemplated this option.

Sofar the movement is fully aware of the dangers of cooptation. There is no evidence that the Gilets Jaunes have been coopted or financed by outside funding. While Soros has supported the so-called “color revolutions”, the Yellow Vests have expressed there position in relation to the fake “revolutions” funded by the financial establishment. 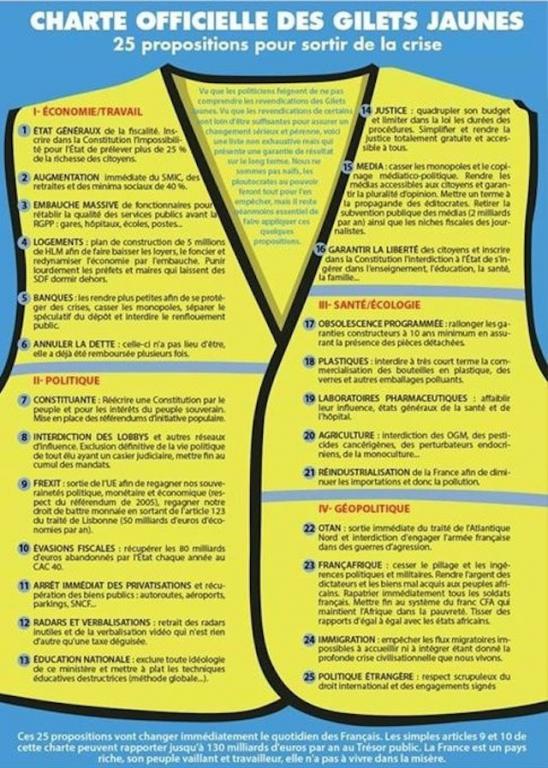 In the case of France, the Gilets Jaunes movement has a grassroots structure.

The Gilets Jaunes call for the withdrawal of France from NATO. It addresses the impacts of neoliberalism while taking a firm anti-war stance. The movement is not manipulated by NGOs or political parties. In the words of Diana Johnstone:

“President Emmanuel Macron’s New Year’s Eve address to the nation made it perfectly clear that after one unconvincing stab at throwing a few crumbs to the Gilets Jaunes (Yellow Vests) protest movement, he has determined to get tough.”

Macron is the very embodiment of this system.  He was chosen by that famous elite to carry through the measures dictated by “the Markets”, enforced by the European Union. He cannot give in.  But now that people are awake to what is going on, they won’t stop either.  For all the lamented decline in the school system, the French people today are as well-educated and reasonable as any population can be expected to be.  If they are incapable of democracy, then democracy is impossible.(Ibid)