NOROVIRUS reponsible for Vomiting Epidemic in the U.K.

Britain is in the grip of a winter vomiting outbreak which has already seen many thousands fall victim to the debilitating virus.

Cases of the bug have surged to a  five-year high and the health service  has reported outbreaks at dozens of hospitals.

Front-line health workers are being struck down by the virus, leaving overstretched departments badly under-staffed.

Experts say the norovirus bug has arrived early this year and have warned the problem will worsen over the winter.

Figures from the Health Protection Agency show the number of confirmed reports of the virus – where samples have been sent by hospitals or GPs to laboratories for tests – is up 52 per cent on last year.

However, this is a just a tiny fraction of the real number because the vast majority of victims do not report their symptoms to their GP. In addition, there have now been 53 outbreaks at NHS trusts across the country.

This includes 45 hospitals which have been forced to close off wards and find space for patients elsewhere while they carry out a deep clean of the wards. 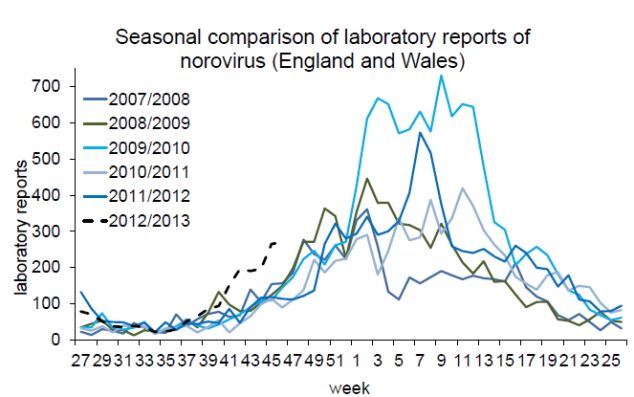 Last night microbiologist Professor Hugh Pennington, based at the University of Aberdeen, said: ‘This year it seems to have taken off earlier than in previous years.

‘No-one can predict what it’s going to do except that we are going to have a reasonably hard time of it, I am sure. It would be grossly optimistic to suggest otherwise.

The HPA figures show the number of wards closed because of the virus is a third higher compared to this time last year, when 33 were shut.

Norovirus is normally brought into hospitals by patients, visiting relatives or even staff. It is also linked to outbreaks at schools and is responsible for many hospital admissions for young children.

The elderly are also vulnerable because they can become dehydrated quickly and end up requiring more hospital treatment.

It is extremely contagious and is often spread by touching the same doors or stair rails as someone with the virus. Experts also say that when a patient vomits, there is a strong chance anyone else in the room will be infected.

It puts the NHS under huge strain because hospitals have to close wards – which limits the number of patients that can be admitted.

Hospitals then have to find space elsewhere in the hospital for all those patients on the ward while it is thoroughly cleaned. Staff must also ensure that any patient with the virus is kept in isolation.

One of the worst-hit is Sheffield’s Northern General Hospital which has closed four wards and is advising visitors to stay away. It confirmed it was aware of four members of staff off-sick with the virus.

Warwick Hospital also confirmed six wards were affected – although not all were closed – and said that three nurses had the illness. It has banned visits to the six wards.

Other hospitals which have outbreaks include Solihull in the West Midlands, East Surrey Hospital, Weston General Hospital in Weston-super-Mare, and Hinchingbrooke in Cambridgeshire.

John Harris, an expert in norovirus at the HPA, said: ‘Everyone can help to minimise the risk of outbreaks at their local hospital by not going if they have the typical symptoms of a norovirus infection.’

He said one of the reasons behind the 2012 surge may be that laboratory techniques are better at detecting norovirus.

Experts do not know why norovirus has arrived early but its spread is extremely unpredictable.

Although it is known as the winter vomiting bug, it can be caught all year round. Scientists say it is more prevalent in colder, wetter months because people spend more time closer together indoors.