Obama’s Sanctions against Moscow “Intended to Box In Donald Trump”

President Obama in the course of his last few weeks in the White House has ordered several retaliatory actions against Russia, on the grounds that Moscow was in involved in the hacking of the Democratic Party National Committee (DNC) with a view to influencing the outcome of the US presidential elections in favor of Donald Trump.

The sweeping measures taken by Obama on December 29 consist in imposing sanctions on Russia’s intelligence services as well as requiring the departure of 35 Russian diplomats “suspected of being spies” from the US as well the shut down of two Russian compounds in Maryland and New York.

According to NBC, the December 29 sanctions on Russia constitute “an assertive act by President Obama to punish Russia before he leaves office.”

The unspoken truth, however, is that the punishment was intended for Trump.

Whereas the sanctions were directed against Russia, the ultimate intent was to undermine the legitimacy of president-elect Donald Trump and his foreign policy stance in relation to Moscow. According to the New York Times:

…. The sanctions were also intended to box in President-elect Donald J. Trump. Mr. Trump has consistently cast doubt that the Russian government had anything to do with the hacking of the D.N.C. or other political institutions, saying American intelligence agencies could not be trusted and suggesting that the hacking could have been the work of a “400-pound guy” lying in his bed.

Mr. Trump will now have to decide whether to lift the sanctions on the Russian intelligence agencies when he takes office next month, with Republicans in Congress among those calling for a public investigation into Russia’s actions. Should Mr. Trump do so, it would require him to effectively reject the findings of his intelligence agencies. (NYT, December 29, 2016)

Obama’s decision not only endangers ongoing diplomatic relations between Washington and Moscow, which are at an all time low, it also contributes to smearing the president-elect and quite deliberately undermining the transition process, namely the accession of Donald Trump to the White House.

Insanity prevails. Ultimately, the objective of this unsavoury decision by the  outgoing president is to foreclose a shift in US foreign policy by president-elect Donald Trump, i.e. with a view to “normalizing” US-Russia relations.

In the immediate wake of Obama’s statements, the mainstream media with some exceptions has gone into high gear, once again targeting Donald Trump’s alleged ineptitude. In an earlier statement, (December 15), the NYT described Trump  as  a “useful idiot,”… an American president who doesn’t know he’s being played by a wily foreign power.”

With regard to the hacking of the Democratic National Committee (DNC) allegedly ordered by president Putin, lest we forget, the leaked emails revealed that the DNC was busy undermining Bernie Sanders’ candidacy during the primaries through various corrupt and fraudulent practices including smear campaigns directed against Bernie.

Russia had nothing to with this process. It was INSIDE the Democratic Party. The main actor was not Moscow, it was the D.N.C. (including meddling by Hillary Clinton and the DNC chair Debbie Wasserman Schultz).

The underlying objective was to discredit Sanders with a view to upholding Clinton (who has a criminal record with the FBI).

The emails revealed certain corrupt and unsavoury DNC activities in support of Hillary Clinton’s candidacy [HRC]. If these DNC dirty tricks in favor of Hillary had not been carried out, Bernie Sanders would most probably have won the Democratic Party nomination and (possibly) the presidency against Donald Trump.

The DNC is responsible for its own failures. The email leaks were not the result of hackings ordered by president Putin, quite the opposite.

Class Action Lawsuit against the DNC

Moreover, there is another significant dimension surrounding the DNC email scandal which was never covered by the mainstream media. Bernie Sanders supporters initiated a class action lawsuit in Federal District Court in Florida against the DNC and the (former) DNC Chairwoman Debbie Wasserman Schultz pointing to “fraud, negligent misrepresentation, deceptive conduct, unjust enrichment, breach of fiduciary duty, and negligence.” (Debbie Wasserman Schultz was forced to resign following the release of the emails).

The lawsuit entitled Wilding et al v DNC Services Corporation and Deborah ‘Debbie’  was filed in the Federal District Court for the Southern District of Florida. 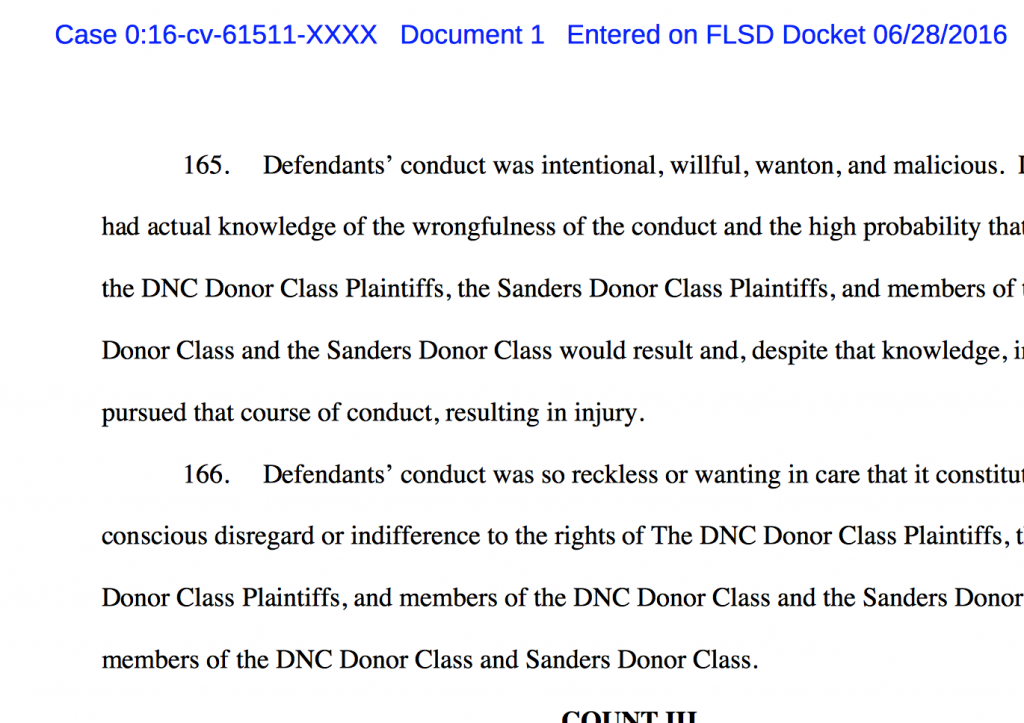 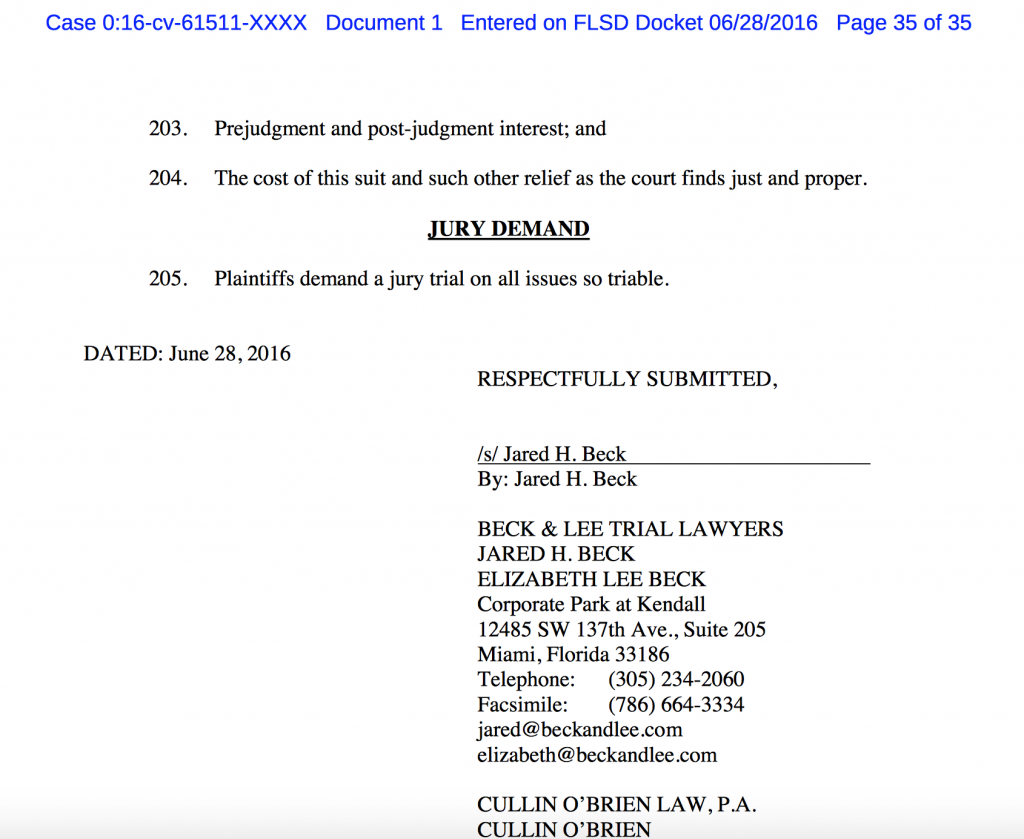 The Lawsuit against the Democratic National Committee and Debbie Wasserman Schultz was delivered by Shawn Lucas acting on behalf of the Plaintiffs on July 1, 2016.

One month later, Shawn Lucas was found dead in his home.

The accusations of the plaintiffs in the class action lawsuit are far-reaching.

MSM Journalists, however, had their eyes riveted on the alleged Vladimir Putin hacking operation. Neither the mysterious death of Shawn Lucas nor the  ”willful, wanton, malicious, reckless, …” conduct of the DNC were the object of mainstream media coverage.

What has happened to the class action lawsuit against the DNC? It was dismissed without further consideration.

No coverage (or mention) whatsoever by the mainstream media of this class action lawsuit which uncovered corruption and fraud by the DNC.

No investigation into the death of Shawn Lucas.

No media coverage of Lucas’ death with the exception of a report in London’s Daily Mail which pointed to several mysterious deaths of Democratic Party campaign organizers and activists including Shawn Lucas:

The ‘Clinton body count’ is a long list of people tied to the Clintons who have died in suspicious circumstances since the early 1990s. The alleged death toll is in dispute but some claim more than 50 people, connected with the former president and First Lady have died in mysterious circumstances. …

Shawn Lucas, 38,  a lawyer who supported Bernie Sanders, was found dead on August 2 on the bathroom floor of his Washington DC apartment. Just a month earlier he had attempted to serve papers on Wasserman-Schultz in a fraud case that alleges the party had unfairly favored Hillary Clinton in the primaries over Sanders. …

Joe Montano, a former DNC Chairman with in-depth knowledge of Hillary Clinton’s campaign, has also been named as on the unofficial list after he died from what authorities say was a heart attack on July 25 – the day the DNC started.

Seth Conrad Rich, who was the Operations Director for Voter Expansion for the DNC, was found murdered on July 10. His death initially appeared like a robbery gone wrong but his mother Mary Rich claims that nothing was taken from her son, who was found with two shots in his back.  (Daily Mail, August 23, 2016)

Author’s note: the latter section of this text on the DNC was in part covered in an earlier article.