The Spanish government is preparing a plan to outsource the control of the people’s banks by demanding larger reserves in a short period of time.  The result?  Banks will probably not make it and the government will ask foreign investors to take control of the Cajas. 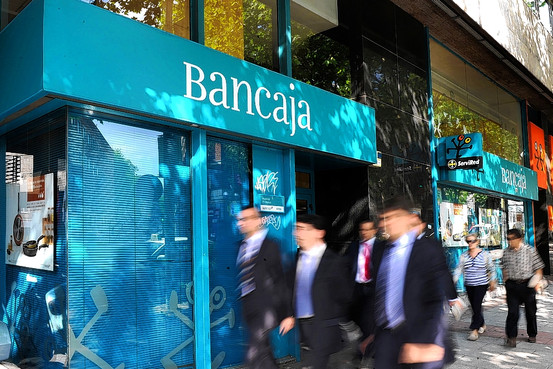 The country’s 17 savings banks, known as “cajas,” are weighed down by loans that turned sour after the collapse of a housing bubble in 2008 and are at the heart of fears the country could need an Irish-style international rescue.

Last month the government approved stricter rules on the amount of rock-solid core capital that banks must hold on their balance sheets, seeking to shore up confidence in the battered economy.

Under the new rules, savings banks must raise the proportion of core capital they hold to 8.0 percent of total assets from the current six percent, or 10.0 percent if they are unlisted.

The Bank of Spain will determine Thursday which savings banks have met the new core capital requirements and in the case of those that have fallen short, how much capital they need to raise to meet the new requirements.

Up to 11 of Spain’s 17 regional savings banks will need additional capital to reach the levels of solvency set by the government, the ratings agency Standard & Poor’s said last month.

The government estimates that all the savings banks will need to raise 20 billion euros to meet the new requirements, a figure many analysts describe as too low.

The state is threatening to take temporary stakes — a form of nationalisation — in those lenders that fail to abide by the new rules by September.

“The government is trying to attract foreign investors for the cajas, so it is logical that it attempt to downplay the amount to make it more attractive,” said Gonzalo Gomez Bengoechea, a researcher at Madrid’s IESE Business School.

The government is encouraging the savings banks to recapitalize using private funds which gives them several options:

– opening their capital to investors;

– listing on the bourse, which would require they become fully fledged banks.

Under pressure from the government, many of the savings banks merged last year, reducing their numbers from 45 to 17, to improve their efficiency.

Ten of these new savings bank groups have decided to transform themselves into banks, or are thinking of doing so, and of these five plan to list on the stock market.

Foreign investment funds — about a dozen according to Spanish media reports — as well as Spanish banks have shown interest in investing in the cajas.

BBVA, Spain’s second largest bank, has said it wants to “take advantage of opportunities” and “enter the game”.

“Every move that can strengthen our project is welcome,” the spokesman for Caixa Penedes, one of the four banks that make up Banco Mare Nostrum, Alberto Puig, said when asked about the reports.

“Among the cajas, everyone is talking to everyone,” he added.

Another four savings bank groups have sold assets to raise their capital.

The Bank of Spain will allow cajas on a case-by-case basis until December to close stake sales to private investors and will give them until March 2012 to hold intial public offerings.