Britney Spears lends her name to a perfume called Britney Spears Curious Eau de Parfum. But if you are curious about what goes into 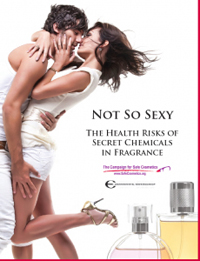 But another 17 chemicals are not listed, and they could be bad for your health, according to two advocacy groups, Campaign for Safe Cosmetics and the Environmental Working Group.

It’s no wonder the marketing for the perfume asks: Do you dare?

This week, the Environmental Working Group (EWG) and the Campaign for Safe Cosmetics published a report called “Not So Sexy: The Health Risks of Secret Chemicals in Fragrances.” The report included the results of laboratory tests performed on 17 name-brand fragrance products revealing that, as a group, they contained 38 so-called secret chemicals. The average product contained 14 chemicals not listed on the label.

The report says of the chemicals:

Among them are chemicals associated with hormone disruption and allergic reactions, and many substances that have not been assessed for safety in personal care products.  Also in the ranks of undisclosed ingredients are chemicals with troubling hazardous properties or with a propensity to accumulate in human tissues.

Consumers can’t count on the government to protect them from potential hazards, according to the report:

A review of government records shows that the U.S. Food and Drug Administration has not assessed the vast majority of these secret fragrance chemicals for safety when used in spray-on personal care products such as fragrances. Nor have most been evaluated by the safety review panel of the International Fragrance Association or any other publicly accountable institution.

Now, as the headline on this blog post not-so-subtly indicates, the fact that perfume companies won’t disclose their ingredients is an unfortunate thing. But is it a reason for alarm? I’m not qualified to judge. Keep in mind that advocacy groups, like the industries they target, have an agenda, which is about getting attention and raising money.

And while the 44-page report is laced with references to scientific studies, the science of measuring the effect of tiny amounts of chemicals on human health is both uncertain and controversial. See, as an example, the recent report by the President’s Cancer Panel which warned of the threats from chemicals in the air, water and food, and the reaction it provoked from, among others, the American Cancer Society. Teasing out cause and effect is just incredibly hard to do.

Having said that, why anyone would choose to smear these chemicals on their face or body is a mystery to me.

Why, as a consumer, would you take any risk, when the allergic effects associated with fragrance products, according to the report, include “headaches, chest tightness and wheezing, infant diarrhea and vomiting, mucosal irritation, reduced pulmonary function, asthma and asthmatic exacerbation, rhinitis and airway irritation, sense organ irritation and contact dermatitis?”

And why as a company would you subject your customers to risk? Here’s how crazy the confusion over chemicals has become: Several perfumes tested including a chemical called diethyl phthalate (DEP), which S.C. Johnson, the forward-thinking maker of Windex, Shout and Glade, agreed last year to phase out because of consumer concerns, while saying the chemical is safe.