The Skripal Affair Hoax to disrupt Diplomatic Relations with Russia

By now it is fairly well established that the Skripal Affair was a hoax, which has had tremendous repercussions, leading to a dramatic disruption of diplomatic relations with Moscow.

That was the political objective at the outset. But what happens now.

The British government has acknowledged that there is no evidence that Russia was the source of the nerve gas agent, while still sticking to the story that the “Kremlin was behind the attack”. 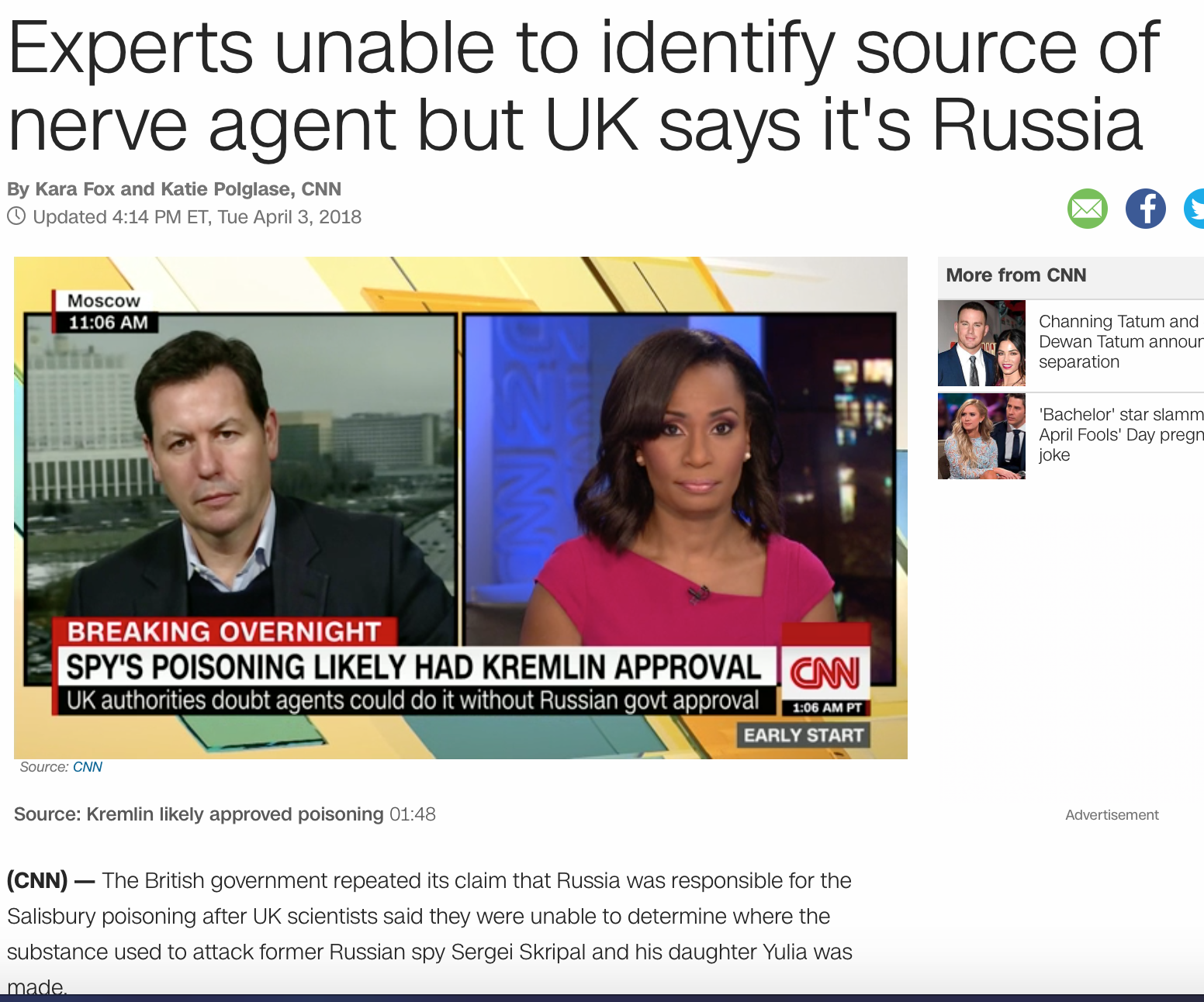 “Smoking Gun”: The Issue is Not the Nerve Agent

The key issue, however, is not the nerve gas nor the source of the nerve agent. It pertains to Scotland Yard’s investigation which categorically refutes the official story. At the same time, there is reason to question the validity of Scotland Yard’s counter-terrorism report.

According to counter-terrorism officials and Scotland Yard, Peter Skripal and his daughter were poisoned at his home in Salisbury as a result of a “Russian hit squad which put poison on Skripal’s front door”.  According to Scotland Yard “The highest concentration of the nerve agent” was discovered on Skripal’s front door. “Detective Sergeant Nick Bailey, who was also hospitalised, is thought to have become ill after going to the house” (Telegraph, March 28, 2018)

The foregoing statements by Scotland Yard as well as the media coverage are contradictory.

Skripal could not under any circumstances have been poisoned by a dangerous nerve agent at his home.

Because the deadly nerve gas agent would have acted immediately and Skripal would not have been able to go from his home (in his BMW or otherwise) to the shopping mall where he was subsequently found (sitting on a bench) and taken to hospital together with his daughter Yulia.

“… experts believe that such gases can kill people within a few minutes. Skripal simply did not have time to walk to a restaurant or shopping center, where he was eventually found.”

See the incisive article by Bassid al Khalili: U.K. is Lying: If Skripal was Poisoned at His Home, The Agent Used against Him Cannot be Nerve Gas  Global Research, April 4, 2018)

If Skripal and his daughter had been poisoned by a nerve agent (at his home), he would have been found at his home rather than on a bench in the shopping mall. This in itself disqualifies the official reports.

It also suggests that The Porton Down statement to the effect that “Russia was not the source of the nerve agent” is  a “red herring” (totally irrelevant). Why. Because the evidence amply confirms that Skripal and his daughter were not poisoned by a nerve gas at Skripal’s home.

This obvious fact –which has not been the object of media coverage– is that Scotland Yard’s counterterrorism report on the “Russian hit squad” is not only fake, it invalidates the UK government’s  “official” narrative, which is also fake. The lie discredits the lie.

Lest we forget, this latest fake Scotland Yard counterterrorism report was preceded by a string of “authoritative” (UK police, government) statements (analyzed and compiled by Stephen Lendman):

First it was claimed father and daughter Skripal were poisoned by a military-grade nerve agent while eating lunch at a Salisbury restaurant.

The narrative switched to Yulia unwittingly transporting the nerve agent planted in her luggage on her flight from Moscow to London.

The story then shifted to Skripal’s BMW, the deadly toxin smeared on its handle, …

Next came the claim about the nerve agent perhaps in aerosolized form affecting them through the vehicle’s ventilation system.

The latest official version claims the alleged nerve agent was smeared on the front door of Skripal’s home.

If any of the above accounts were valid, the Skripals, Bailey and at least 38 reported others exposed to the same toxin would be dead – surely many others as well.

Yet a month later, no one died. Bailey recovered enough to be discharged from hospitalization. Yulia’s doctor said she improved markedly. Days earlier, Sergey was reported in stable condition.

Bombshell Report: Yulia Skripal Says Her Father is “All Right”

Russia was not the Source of the Nerve Agent: The Porton Down Statement. Boris Johnson and the Foreign Office

Her Majesty’s Foreign office is in crisis as a result of Porton Down’s statement to the effect that Russia was not the source of the nerve gas.

The justification for expelling Russian diplomats from a number of  EU countries no longer holds?  There is no proof that the nerve gas was from Russia. 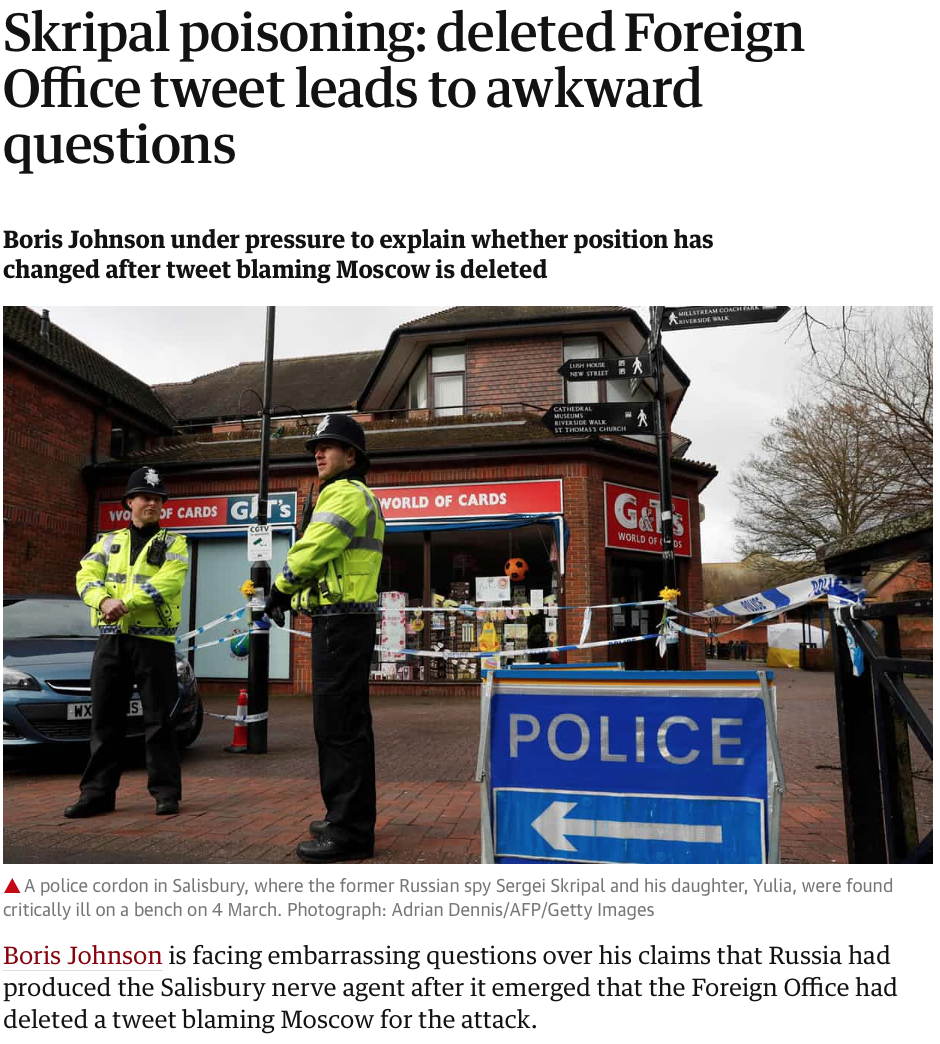 Will Boris Johnson be forced to resign?

“Russia is to blame” said  Theresa May, without a shred of evidence. The UK government’s baseless accusations have led  the expulsion of Russian diplomats by 20 countries (18 countries of the EU, plus Canada and the US). and Moscow has responded by expelling Western diplomats.

Now that the hoax has been fully revealed. What next?

Boris Johnson has been asked to explain.

A political upheaval in several European countries?  Will diplomatic relations be normalized following these revelations? Unlikely unless there is a backlash from the EU governments which were deliberately misled by the U.K. 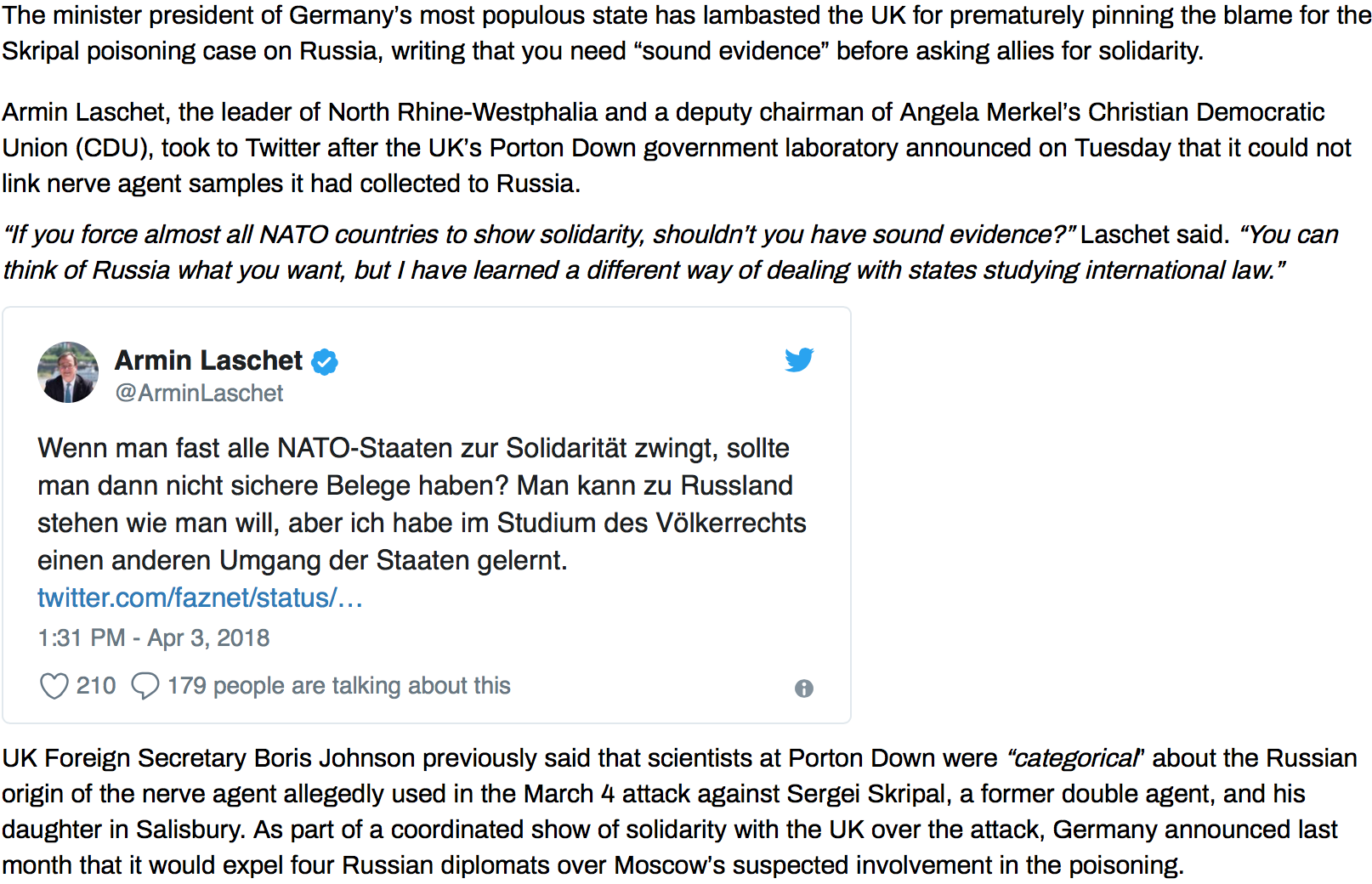 At the moment both the UK government and the media are in denial. The latest statement from Theresa May’s office emphasizes that “[the UK government has]  knowledge that within the last decade, Russia has investigated ways of delivering nerve agents probably for assassination…”  (quoted by the Washington Post, April 4, 2018)

The Media’s Double Standards in the Coverage of Important Events. The Skripal Novichock affair versus the Gaza Massacre

A sick Russian double agent and his daughter recovering in hospital, blamed on Vladimir Putin

The “Gaza Massacre” is not front page news. It does not make the tabloids. “Israel is not to Blame”.

Yet these killings were ordered by the Netanyahu government.

Should these 20 Western countries not contemplate the timely expulsion of Israeli diplomats?