Trump, the US version of Gorbatchev

The policy of the United States since the fall of the Soviet Union has been a combat between two schools of thought.

This cleavage exists within each party, Republican and Democrat. However, time flies, and the United States is now on the edge of inner collapse.

As of now, Donald Trump finds himself in the uncomfortable position of Mikhaïl Gorbatchev.

ll pending international problems are affected by the refusal of the United States – and sometimes their European allies – to admit the growth of other countries. And Washington does not hesitate to use unspeakable methods to postpone the fall of its empire.

The colossus fell to ruins, throwing the economy of its populations back several decades, brutally amputating the life expectancy of its inhabitants by more than twenty years, and provoking the domino fall of several of its allies.

At that time, the question of knowing what would be the consequences of this cataclysm on the other great empire of the 20th century – the United States and their allies – was already being asked.

An eminent Russian political scientist like Igor Panarin predicted the disintegration of the United States into five distinct countries, according to the ethnic origins of its inhabitants.

Some people believed he was projecting onto Russia’s rival the reasoning that French political scientist, Hélène Carrere d’Encausse, had applied to the USSR – a scenario which did not occur, but which nonetheless governed the future of the ex-Soviet territory.

Seeking to avoid the implosion of his country, President George H. Bush decided to get rid of his Cold War military apparatus as quickly as possible.

He forced international recognition of US leadership during operation « Desert Storm », then demobilised more than a million soldiers, in other words, half of his taskforce.

He reoriented his policy, believing that he was entering a period of peace and prosperity. However, he nonetheless provided a doctrine for his country aimed at forestalling the emergence of a new rival.

Although no-one at the time imagined that Russia would rise again, either in the medium or the long term, his extreme-left advisor, Paul Wolfowitz, convinced President Bush to keep the European Union in check.

Fearing the spectre of collapse, the Republican Party took over the House of Representatives in order to promote its Contract with America.

In 1995, it forced Democrat President Bill Clinton to rearm the country and integrate the ex-members of the Warsaw Pact into the Atlantic Alliance. And yet there was no longer an enemy, and therefore no reason to arm, nor to perpetuate NATO.

Congress rejected the dream of Presidents Bush the father and Clinton of a world where, freed from a serious rival, the United States would become the motor of the world economy.

On the contrary, it considered that the Pentagon should profit from the disappearance of the USSR to extend its domination to the whole planet.

Once rearmament was voted, with the approval but not the commitment of President Clinton, the Pentagon was implicated in the wars in Yugoslavia. This engagement quickly became public and led to the war of NATO against the future Serbia. 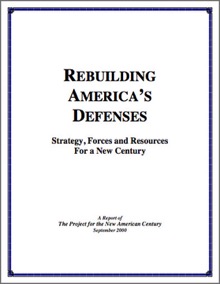 In September 2000, the Project for a New American Century published its programme – « Rebuilding America’s Defenses ».

Simultaneously, the members of the Continuity of Government [1] (Dick Cheney, Donald Rumsfeld, James Woolsey, etc.) launched the Project for a New American Century. Its objectives were [2]:

the defense of the homeland;

the engagement and victory in several simultaneous major wars (the important point is victory, we shall find a way to justify these conflicts later. Author’s Note);

the accomplishment of the usual tasks of the armed forces (mainly the defense of the multinational companies who are exploiting the oil. (Author’s Note);

and the transformation of the armed forces in order to exploit the revolution in military affairs.

Powerpoint taken from a conference given by Admiral Cebrowski at the Pentagon on 23 July 2003. On the left, in mauve, the zone in which it was deemed necessary to destroy the States and their societies.

Only the initiated knew at the time that the fourth point was taken from the strategy elaborated by one of Rumsfeld’s protégés, the future Pentagon leader of the Office of Force Transformation, Admiral Arthur Cebrowski [3].

This strategy was taught in the different military academies from the end of 2001, then vulgarised in 2004 by Cebrowski’s assistant, Thomas Barnett [4].

We can see this strategy at work since the attacks of 9/11 with the progressive destruction of the States and their societies throughout the whole of the Greater Middle East, under various pretexts which mask its real objective.

The Rearmament Act of 1995 and the strategy of Pentagon’s new map, which

were implemented in the Greater Middle East from 2001, are now on their last legs. While the United States concentrated the greater part of its resources on the destruction of the Muslim world, other countries were developing, including Russia and China.

Today, the US armed forces are no longer the strongest armies in the world. 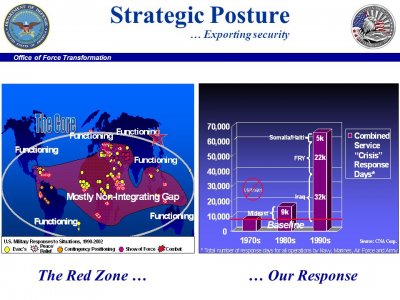 This is what President Donald Trump and General James Mattis, his Defense Secretary, admitted in the National Security Strategy statement during his speech on 17 January at Johns Hopkins University [5].

Even though they did not explicitly state that they had been overtaken, they posited that it was an absolute priority to « re-establish [their] comparative military advantage », which basically admits the same.

Of course, the US armed forces have an unparalleled budget which is nine times greater than that of Russia. But its armies are pitifully unproductive [6].

In Syria and Iraq, the Pentagon deployed approximately 10,000 men against Daesh, of whom only a third were soldiers and two thirds « contractors » (mercenaries) from private companies.

The budget for this operation was seven times greater than that of Russia, and the military outcome was a miserable failure.

Donald Rumsfeld – who had brilliantly reorganised the multinational company Gilead Science, which he managed – not only proved incapable of reforming the Secretariat of Defense, but the more money he threw at it, the less efficient it became.

US armament is certainly produced in huge quantities, but it is obsolete compared with that of Russia and China.

US engineers are no longer able to produce new weapons, as demonstrated by the failure of the F-35 programme.

At best, they cobble together bits of old machines and present them as new aircraft.

As President Trump noted in his National Security Strategy, the problem is due both to the collapse of Research and Development and the omnipresent corruption in Pentagon acquisitions.

The armament industries sell their products automatically, while the Secretariat of Defense has no idea of what is really necessary [7].

Whichever way we look at the problem, the United States army is a paper tiger and there is no hope of reforming it either in the medium or the long term – and there is even less chance that it will once again eventually overtake its rivals Russia and China.

The election of Donald Trump to the White House is first of all the consequence of this undeniable collapse.

The only solution for maintaining the quality of life for US citizens is in fact to immediately abandon the dream of a global empire and to return to the principles of the United States Republic of 1789, as laid out in the Bill of Rights. 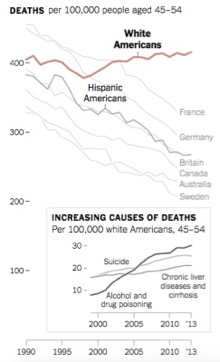 According to the Nobel Prize for Economy, Angus Deaton, the life expectancy of white US citizens has diminished drastically, specifically since 2001, while it has progressed for all other categories of the US population.

Over the last sixteen years, the very old problems of US society have developed exponentially. For example, the use of drugs, which until recently concerned mostly the minorities, has become an epidemic for white males [8].

To the point where the struggle against opioids has become a major national cause. Or again, the possession of fire-arms has become an obsession.

The cause is not a question of the constitutional right to bear arms in order to protect oneself from eventual abuse by the State, nor the behaviour of cowboys gunning for potential criminals, but the fear of generalised riots.

Finally, as soon as they have the financial possibility, US citizens now group themselves in compounds with people of the same cultural origins [10] and the same social class.

As from now, international relations are dominated by this question – will the United States accept its current position or not. [11]. Today, Donald Trump finds himself in the same uncomfortable position that Mikhaïl Gorbatchev once occupied.