This is something that is always in my head, especially when I read Monsanto’s ideas to enhance and perpetuate their control of the food supply. Those ideas include the monopoly of every single form of food that exists; vegetable, animal, artificial and so on. Monsanto also wants to control the production of seed, as they already do with the Bt cotton and other genetically modified organisms. 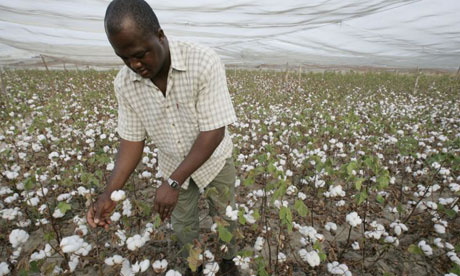 The evil genius in this idea is clear. If you control food, you control people. The same happens with banking; if you control the money supply, you can control the economy. “We now believe that Monsanto has control over as much as 90 percent of (seed genetics). This level of control is almost unbelievable,” said Neil Harl, agricultural economist at Iowa State University.

Although some lawsuits have tried to curb Monsanto’s and other biotech companies’ thirst for food and seed monopolies, none of those lawsuits have been strong enough to effectively stop corporations from seeking their dreamed control of everything we grow and eat. But Monsanto is not alone, and neither is it all about controlling seed and food. The issue of control spreads to manipulating prices, markets, buying off politicians and braking previously signed agreements with farmers when things don’t go as planned.

Recently, countries in Africa and even Australian farmers have gotten a taste of what a monopoly feels, sounds and looks like. In Australia, the government has officially allowed CISRO to begin GMO trials on people. This fact propelled re-known chefs to protest and call for a ban on food experiments with genetically modified organisms.

Meanwhile, in Africa things are even worse. It is widely known how debt drove farmers to suicide because their costs increased exponentially, their yields decreased enormously and their soils became so depleted that not even weeds would grow on them. Who hasn’t seen the film “The World According to Monsanto“?

A food monopoly means that not even during a time of bonanza do farmers get real benefits for adopting genetically modified seeds and planting their land with one single crop. In Burkina-Faso, a short boom in cotton prices ended abruptly after the government and regional cotton monopolies, decided to not only to increase the prices of fertilizers by 38 percent, but also to pay farmers as little as 39 percent of the world’s price for their ‘white gold”. That is what a monopoly look like, feels like and sounds like. Government and corporations in bed fighting against the farmers.

Companies such as Paris-based Geocoton and Paul Reinhart AG of Winterthur, Switzerland control the cotton markets in Burkina-Faso as the government allowed the creation of monopolies that mandate farmers to sell their cotton to them. A finger pointed committee is in charge of setting the rules that in turn determine cotton prices there. Now, those rules were changed, for the benefit of the corporations. The committee decided to alter the formula used to set prices. That cut payments for last season’s crop by 39 percent and reduced the base price announced in April.

This should have been a year “when people can finally get a few dollars and put metal roof on their house,” said Thomas J. Bassett, a geography professor at the University of Illinois. Basset has written about west africa’s cotton farmers for many years and he believes these ways of doing business are the ones that spur poverty and misery, especially when they are adopted in places like Africa.  “… they result in poverty for producers and wealth for companies and traders. It’s subtle and it’s dastardly.”

So what might be the origin of the changes in the rules? According to Yannick Morillon, chief executive officer of Paris-based Geocoton, it is a math issue. His company, along with others that operate in Burkina-Faso had set up sale prices before the great boom in cotton prices occurred, therefore by following those contracts, they wouldn’t have ripped the results of an ever more valuable crop. The monopoly controllers decided to simply decrease payments and increase the price of fertilizers to make up for the “loss”. “The economic equation wasn’t possible any longer,” he said in an interview at Geocoton’s headquarters off the Champs Elysees. “And if the entire industry collapses, it’s the farmers that are affected.”

Although government complicity is one of the corporations’ closest allies, there is another component in this fraudulent formula. The companies that control the monopoly of cotton and other crops take advantage of the fact that most farmers are illiterate. Amado Kafando is one of those farmers. He says he doesn’t understand the formula used to pay him, and consequently, neither does he get the changes that affected the changes in prices. Although Kafando will get more money for his cotton than what he got last year, the total amount will be substantially less that he was supposed to obtain as profit from his cotton sale.

“The price has multiplied by three or four times, so at our level it should be multiplied three or four times as well,” Kafando said. “The monopolies are getting fat, and we are the ones who are feeding them.” One direct  result of the corporations’ fraudulent practices was the anger expressed by the farmers. The government’s response to that anger was a public relations campaign to pacify the farmers given their intentions to boycott the production of cotton. As it happens in many parts of the world, money spoke louder and farmers’ representatives were invited to meetings to talk about their anger and find a solution to the problem.

During one of those meetings, the agriculture minister, served as the corporations’ salesperson to calm everyone down and to offer them another deal. He said farmers should enter into a “new and dynamic contract” to allow the plantation and production of cotton to continue uninterrupted. With the government and the corporations playing in the same team, farmers really did not have any options to choose from. They had to hear the sales pitch, say yes, and hope for the best, or say no and go back home with their hands empty. Is that a real choice?

This is an example of what monopolies look like. It is simply another form of colonialism; legalized colonialism. Farmers must choose between not planting cotton, or growing it and selling it to the regional or national monopoly at whatever prices they want to pay.